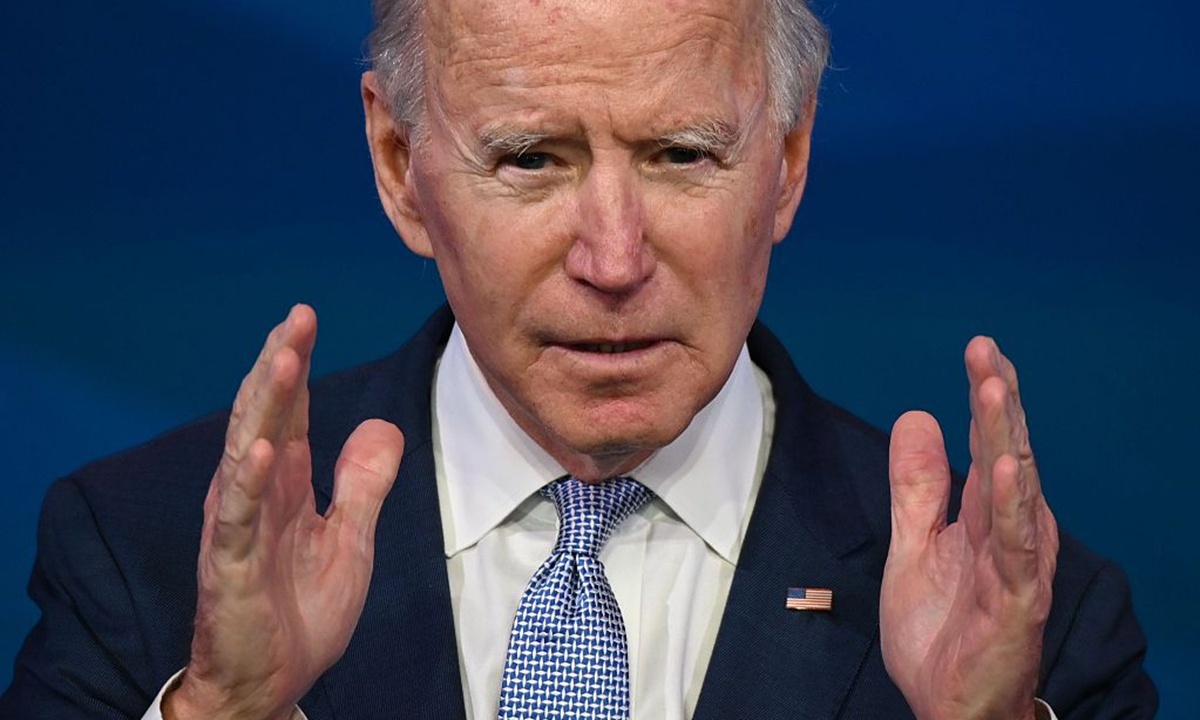 Joseph S. Nye, Jr., a former dean of the Harvard Kennedy School of Government who coined the term "soft power" in the late 1980s, published an article on Saturday with the National Interest, saying of the incoming Biden team, "American resilience will once again lead to a recovery of our [US'] soft power."

Of course, the decline of US soft power is a long-term process that did not begin during the Trump administration. The waning days of the US started when former president George W. Bush waged the Iraq War in 2003. Even though US' credibility was redeemed to some extent under the presidency of former president Barack Obama, it has been exhausted during the past four years under Donald Trump.

The incumbent US government has promoted trade protectionism and unilateralism. It withdrew from several international organizations, tore up a number of bilateral and multilateral agreements and gravely undermined its relationship with its allies and partners. Over the past four years, US polarization has become more evident with social divisions becoming more severe. As a result, Washington's global impact and appeal have remarkably declined. This has posed a huge barrier for it to maintain global hegemonic dominance and alliances.

In terms of global influence, the most evident embodiment of US' soft power can be seen in the wear and tear with the loss of its credibility. Since Bush Jr., Washington's credibility began to decline with excuses to invade a country that resulted in huge causalities. The current government behaves with a gangster's logic of pursuing "America First." They have drained the credibility that the US has accumulated since World War II.

The international community tends to agree that although the US is changing its president, it still remains unclear what the US will be like after four years, especially for US allies. Even if they rebuild and deepen ties with the US, they will still worry if these achievements will be discarded four years later.

Any credible country must assure consistent policies. If a new government has the potential to break the promise and responsibility reached between former administrations and other countries, the latter will harbor grave doubts toward such a country.

The decline of US' soft power has also had serious impacts on people's trust in the US system. At present, the US is suffering from severe partisanship, polarization, social fragmentation, economic stagnation and severe pandemic casualties. Many people in the US now doubt their system.

The legitimacy and effectiveness of the US electoral system has been widely questioned, leading to violent attacks. The US used to be the beacon of the free world, but now it is no longer so bright. In this context, US' hope of maintaining its position as a political role model has collapsed.

Moreover, US' response to COVID-19 in 2020 is a clear example of the failures of its political system. The deaths of more than 370,000 people attributed to the US government's mishandling of this crisis. But according to the current US system, it's hard to hold anyone accountable.

Against this background, Joe Biden has to face high expectations of the international community. Although Biden has yet to take office, he has vowed to repair relations with other major powers and engage actively in multilateral cooperation and responsible global governance.

In his article, Nye also believes that if Biden can tame the COVID-19 pandemic, revive the economy and provide a political center that eases polarization, American resilience will once again lead to a recovery of soft power.

As a country, credibility is its most valuable asset. But everyone knows that the US has suffered a big credibility problem. So it's going to be very difficult for the US to restore its attractiveness and influential power to its allies in the short-, medium- and long-term.

Even with Trump out of office, Trumpism still has great influence in US society. Social divisions are hard to reconcile and the attractiveness of the US system will be hard to repair anytime soon.

In conclusion, it will be hard for Biden to recover US soft power.

The author is a research fellow at the Chinese Academy of Social Sciences. opinion@globaltimes.com.cn