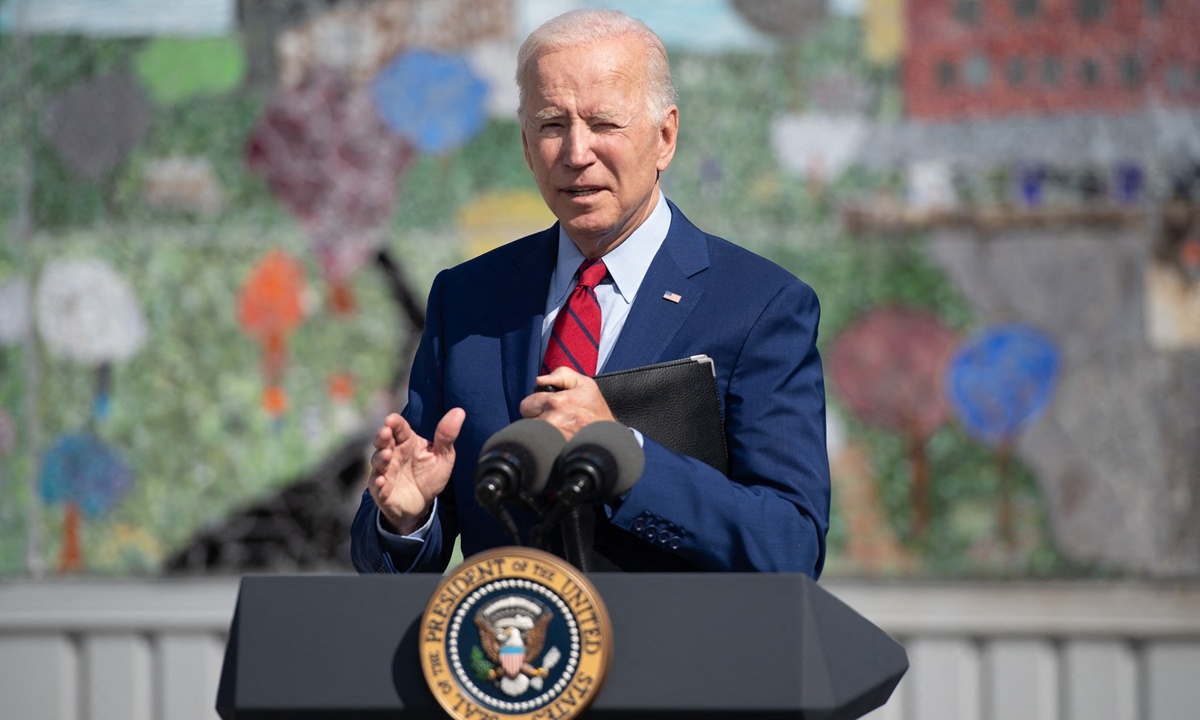 US President Joe Biden speaks about coronavirus protections in schools during a visit to Brookland Middle School in Washington, DC, September 10, 2021. (Photo: AFP)

US President Joe Biden on Thursday ordered his most aggressive federal vaccination push. "If you want to work with the federal government and do business with us, get vaccinated. If you want to do business with the federal government, vaccinate your work force," he said. "The vaccine requirements in my plan will affect about 100 million Americans — two-thirds of all workers." Yet the new rule has triggered backlash.

The order is widely interpreted as "vaccine mandate," which used to be, according to observers, one of the last-ditch measures Biden wanted to adopt. This is Biden's last resort to fight coronavirus in the US. He has no alternative, because he has failed to honor his words made during the presidential election campaign - controlling the epidemic.

The worst-case scenario during Trump's tenure was when single-day new coronavirus infections surpassed 200,000 in December 2020. Today, not much has changed in the US. On September 9, the US recorded over 170,000 new cases, Yahoo News reported on Saturday. "I will be surprised if we don't cross 200,000 cases a day in the next couple of weeks, and that's heartbreaking considering we never thought we would be back in that space again," Francis Collins, director of the National Institutes of Health, said in mid August.

It can be argued that Biden's adopted measures to curb COVID-19 haves been proved to be ineffective. Eventually, he had to turn to vaccine mandates.

It seems like a U-turn in US prevention and control measures, like a reform with the determination to make painful changes, after all the mistakes the country has made and all the detours it has gone through. Unfortunately, it is a politically calculated move rather than a measure purely aims at reining in the virus. If the mandates can be implemented, it will stem the flood of infections, slow the epidemic in the US, and most importantly, maintain and even raise the popularity of Biden and the Democratic Party in the coming midterm election.

But the order is tough in being implemented. It will face stumbling blocks in the coming days, exacerbating divisions within the US.

To begin with, each state in the US has a significant degree of autonomy. Whether a decision can be worked out does not depend on the federal government. It rests with the states. In the case of mandatory vaccines, at least 19 Republican governors have lashed back at Biden, ABC News reported on Saturday. South Dakota GOP Governor Kristi Noem tweeted, "see you in court." Governor Doug Ducey of Arizona wrote on Twitter: "The Biden-Harris administration is hammering down on private businesses and individual freedoms in an unprecedented and dangerous way."

Political infighting between major US parties is unlikely to ease during Biden's presidency. On the contrary, they will intensify. The Republican Party is concerned about its own influence being weakened. So it is publicly opposing the new mandate simply out of their political instinct. A new round of bipartisan fight is emerging.

Biden stressed Thursday that "If they'll not help — if these governors won't help us beat the pandemic, I'll use my power as President to get them out of the way." This will turn out to be merely a slogan. Biden's leadership is not strong enough. Not to mention his powers are limited by the US Congress, the states, and elections. His push for mandatory vaccinations will be hard to carry out. And divisions in the US will continue to exist. This means American society will be stuck in chaos for a while.

The US, which is supposed to be a country with a well-developed system of the rule of law, cannot fix its own problems. Moreover, no one is being held accountable for the problems. It's been 20 years since the September 11 attacks. Has the US even thought about its own problem from 20 years ago? No. It took aim at external targets and launched attacks on the Taliban. Similarly, has anyone in the US been held accountable for the failing fight against COVID-19?

For a time, Washington relentlessly attacked Beijing instead of tackling the public health crisis with a scientific spirit. Worse, Trump might attempt a political comeback in 2024. Those who should have been punished for their mistakes in the US are still very much proactive in the country's public opinion, leading the public opinion trend.

Such a country with a system like this is dangerous. It seldom corrects its mistakes. It will only keep hurting other countries.

Vaccine mandates are the last resort for Washington. But it has little chance of success. The idea of "mandates" does not work in the US political and cultural environment. This will only aggravate social divisions. As a result, the US is predicted to continue going on the path of irreversible decline.