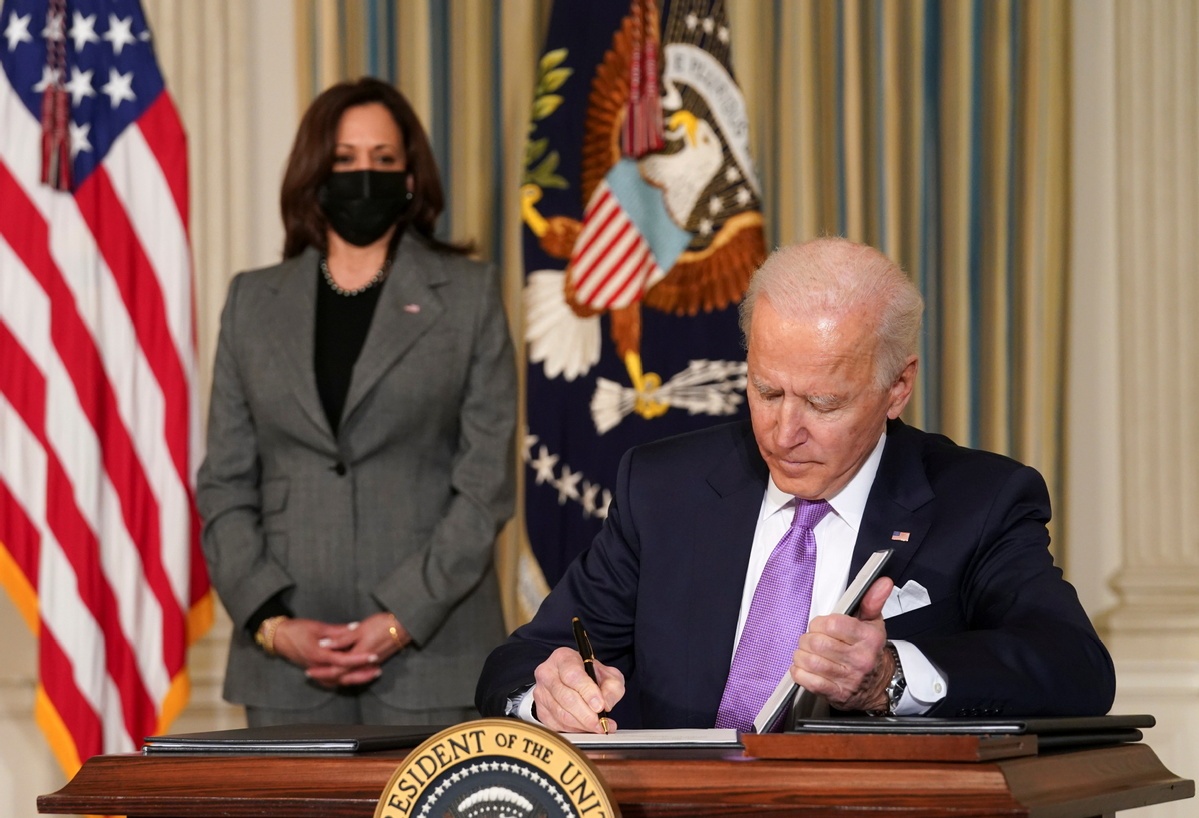 US President Joe Biden signs executive orders on his racial equity agenda at the White House in Washington, US, Jan 26, 2021. (Photo: Agencies)

President Xi Jinping's appeal to a divided world to return to sanity and join hands to contain the COVID-19 pandemic and meet other global challenges is also a call to the new US administration to end the ugly era of stigmatization and accusations－created by former US president Donald Trump and former secretary of state Mike Pompeo－and write a new chapter in Sino-US relations marked by cooperation and win-win partnership.

While calling for global unity in his speech to the World Economic Forum virtual event on the Davos Agenda on Monday, Xi proposed five measures to help build a community with a shared future for mankind including strengthening cooperation to overcome global challenges.

Judging by their past records, United States President Joe Biden and Secretary of State Anthony Blinken are expected to respond constructively to President Xi's call for global unity and his warning－based on the assessment of possible consequences－that, before it is too late, all countries should work together to prevent the world from sliding further into isolationism and being divided into power blocs.

But the past is not always the key to a rapidly changing present. Anti-Chinese prejudice and rhetoric have become a powerful driving force in US politics, and even after Trump's departure, most of the mainstream Republican leadership has been trying to carve out hard-line positions and use these to their advantage. And it is telling that during the long election campaign and troubled transition, neither Biden nor Blinken nor new national security advisor Jake Sullivan saw it necessary to speak out publicly against them.

Continuing that policy even after assuming office would be a grave mistake for the US leaders. It would allow the negative momentum of attitudes from the Trump years to gather speed, although that is not what any of the new US foreign policy team really wants. Biden, however, is likely to at least damp down the seemingly endless attacks against Beijing that were a staple of the Trump-Pompeo duo. Albeit that is by no means certain.

Instead, Biden and Blinken may be tempted to continue making cheap points by urging chaotic and destabilizing policies targeted at the Hong Kong Special Administrative Region regardless of the harm they have done to the people of the special autonomous region over the past two years. For the driving force of the new US administration, as much as it was for the old one, is a dangerously manic and reckless form of self-righteous liberal neo-imperialism. It is the presumption that regardless of the woeful and chaotic state of democracy in the US, Washington continues to enjoy a unique, divine right to meddle in the internal affairs of other countries.

That Biden and Blinken are likely to continue this alarming policy is evident in the signs that they may continue Trump's stance on Venezuela. This, along with continued US hostility toward China indicates more of the same. And, of course, it remains to be seen what Biden chooses to do－or not to do－on the many tariffs the Trump administration imposed on Chinese exports to the US.

Xi's call for global unity has given the Biden administration an opportunity to repair the damage the pandemic has done to the global economy including the US and Chinese economies. And while cooperation between the two largest economies of the world is absolutely essential to build the right environment needed for rapid global recovery, Biden's political and government service record suggests he will recognize this opportunity.

However, even if Biden realizes this, as he likely does, his experience in the Barack Obama administration may militate against him, preventing him from taking full, immediate and constructive advantage of it. Former US president Obama, during his first two years in office, threw away the huge popular mandate he had received by following the witless advice of his chief of staff Rahm Emmanuel (who as Chicago mayor went on to run the great city into the ground during the unprecedented violence in 2011).

Emmanuel advised Obama to play for time and avoid taking decisive action on a wide range of urgently needed reform issues. As a result, the Democrats lost control of the Senate and the House of Representatives in the 2010 mid-term elections.

Biden should not make the same mistake, but, at 78, he runs the risk of sticking to the most negative－and conservative－political instincts he developed during his eight years as US vice-president during the Obama administration. Currently, it looks like his lifelong political work may be swamped by the self-righteous urge to indulge in American exceptionalism around the world, like in the case of Obama.

But to do so would be a tragic mistake. As Xi said in his message to the WEF, constructive partnership in leading global recovery offers the US and its new leader a "win-win" situation. So Biden should not be deterred from capitalizing on the offer by the sterile hatred of his predecessors for other countries or the temptations of their own rhetoric.

The author is a senior fellow at the American University in Moscow.