Black terror: The real threat to freedom in Hong Kong

People are beaten by rioters for voicing their opinions; children are pressured into conformity by radical students and teachers at school to attend illegal demonstrations; sons and daughters of police officers are bullied with their personal information being posted online.

One of the preconditions for freedom and democracy to flourish is freedom from fear. The rioters have taken that freedom away from Hong Kong's other residents. In doing so, they have shown what is the real threat to democracy and freedom in Hong Kong.

HONG KONG, Oct. 8 (Xinhua) -- A shroud of blackness is spreading in Hong Kong. Black-clad people chant hateful slogans; black masks hide mobsters' identity as they bludgeon passersby with black umbrellas unfurled to hide from media cameras, all supposedly in the name of democracy and freedom. 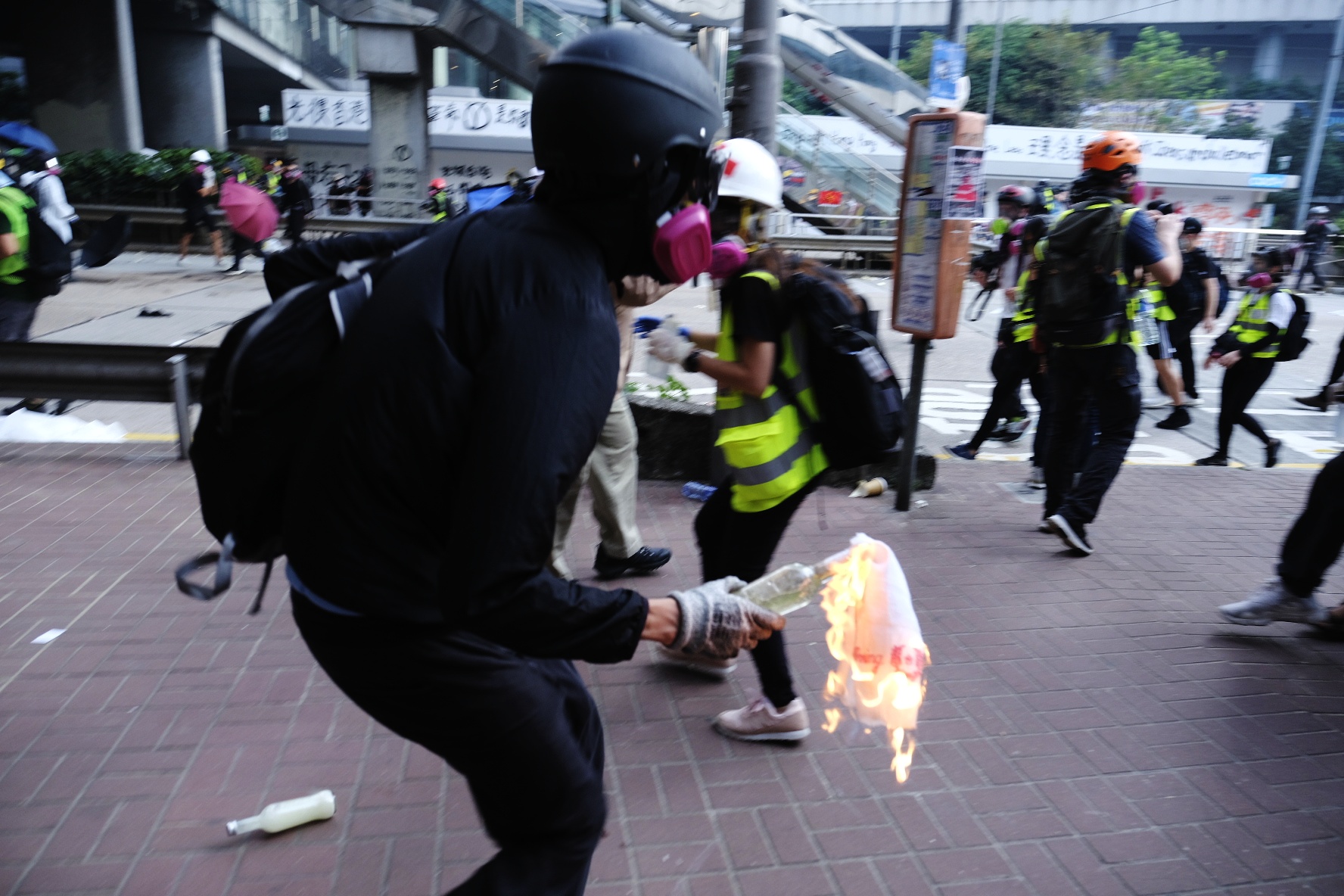 The photo shows a rioter is about to hurl a petrol bomb toward the police on Oct. 1, 2019, in Admiralty, in eastern Hong Kong. (Xinhua)

For many residents, this blackness is depressing. They are often too intimidated to speak out or take action as they witness the violence that is wreaking havoc across Hong Kong.

Recent outbreaks of riots have undoubtedly unveiled the real threat to democracy and freedom in Hong Kong, once a peaceful and prosperous place in south China.

On Sunday night, black-clad rioters vandalized metro stations, forcing the shutdown of Hong Kong's key transport network, and shattered shops whose owners they assumed were patriotic, depriving others of the basic rights they claimed to be fighting for.

Their exercise of "private settlement," a euphemism for lynching those who disagree with them, or merely uttered different political views, reached new heights on Sunday night, when at least three people were savagely beaten by the rioters.

In one case, a woman was attacked by masked men when taking pictures of rioters damaging ATM machines. Footage from local channel TVB showed her bleeding from the mouth and neck, while some black-clad rioters kept scolding and pushing her and pointing laser beams directly at her face.

Cyberspace has become their "on-line black territory" as well.

Toby Gu, a Canadian vlogger who posted a video of black-clad mobs beating a passerby on YouTube, has received death threats.

Having read much news on Hong Kong, he decided to fly here, expecting to see the "peaceful" protesters and "brutal" police.

What he saw was just the opposite -- brutal protesters and restrained police.

He captured footage of a man being savagely and relentlessly beaten by rioters. A large mob swarmed on the man, raining a storm of fists and kicks on him.

What did the man do to deserve the savage beating? Video shows his hand brushing over a leaflet protesters had stuck on a wall in a metro station. Covered in blood and bruises, the man was cornered in the metro station while rioters continuously hit him in the five-minute video. 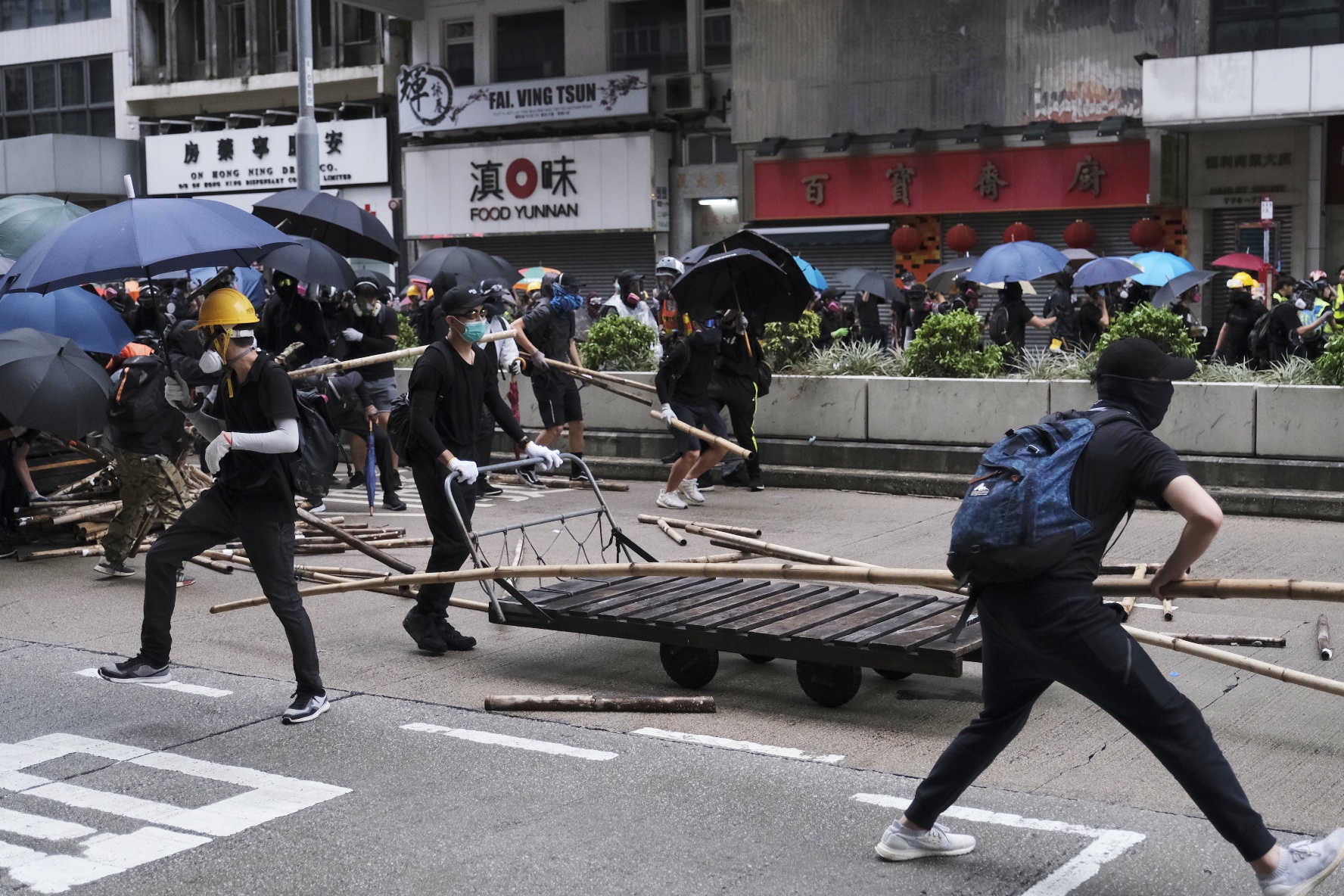 Gu's footage "enraged" protesters. They threatened him with malicious comments and messages. Some even wrote they had "daggers ready."

Freedom of speech? Yes, for protesters and those with identical views only. But the answer is no for anyone else.

Radical protesters have plastered numerous pieces of graffiti, posters and leaflets on public buildings and shop fronts. Some urged school children to walk out of class, others carried signs with slander, curses and degrading insults.

In Hong Kong these days, even the simple act of cleaning the graffiti and posters takes considerable courage. Radicals call them "Lennon Walls" and gangs beat people who dare to remove them.

Tolerance, at the very least patience and willingness to listen to other people's opinion, is not in their vocabulary.

Even colors of clothing have political meaning in their eyes. When a large group of black-clad rioters swarms the street, people wearing other colors may be in trouble, especially those in white -- the opposite of black, or blue -- the color of police shirts. 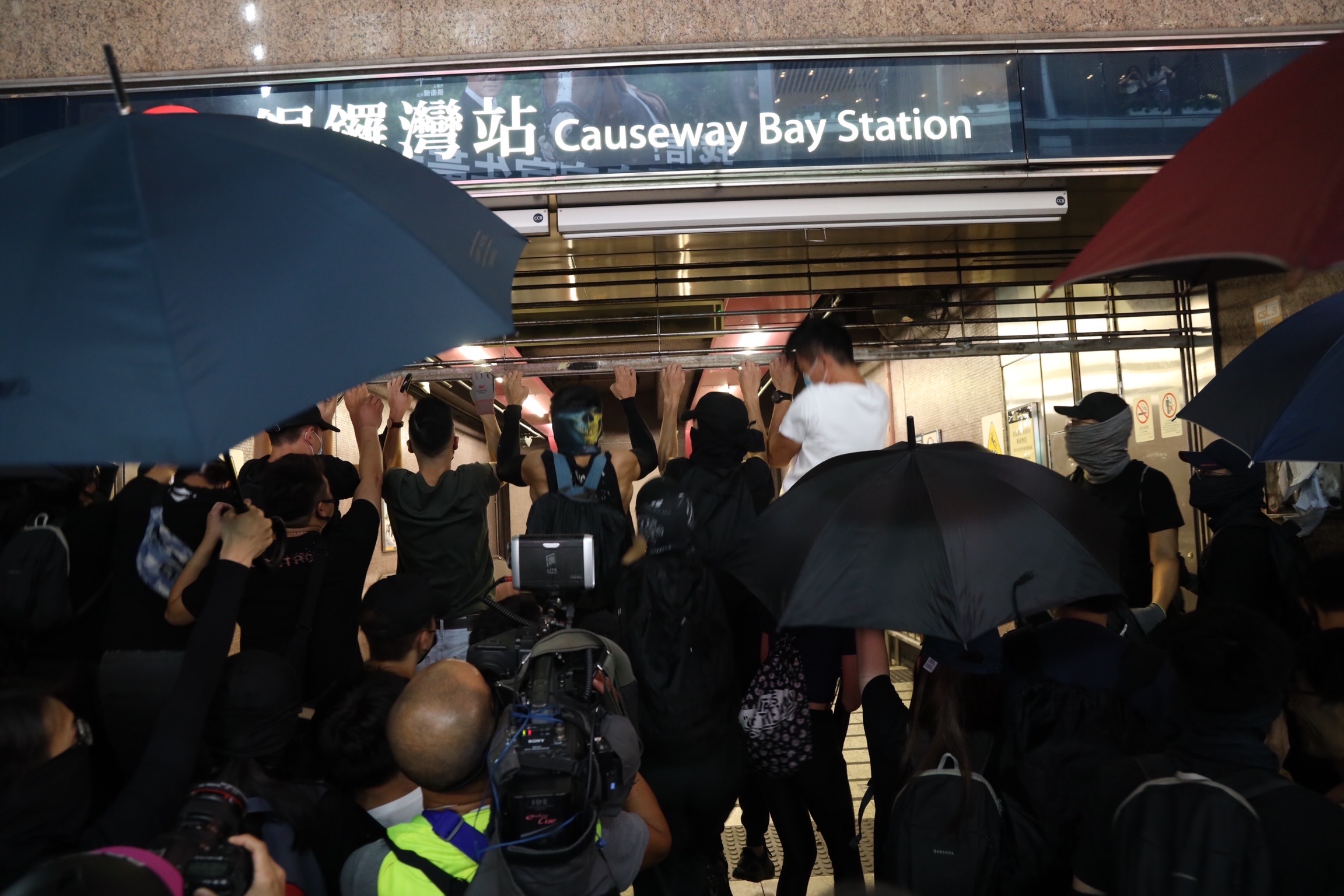 Many people in Hong Kong have been forced into silence. People are beaten by gangs for voicing their opinions; children are pressured into conformity by radical students and teachers at school to attend illegal demonstrations; sons and daughters of police officers are bullied with their personal information being posted online.

Never heard such a story? Gu's experience tells why.

When Gu filmed the gang beating, there were dozens of other cameras by his side. But some Western and local media outlets just shrugged it off, as they did with numerous other one-sided gang beatings, as "a scuff between people with different opinions."

One of the preconditions for freedom and democracy to flourish is freedom from fear.

The rioters have taken that freedom away from Hong Kong's other residents. In doing so, they have shown what is the real threat to democracy and freedom in Hong Kong.