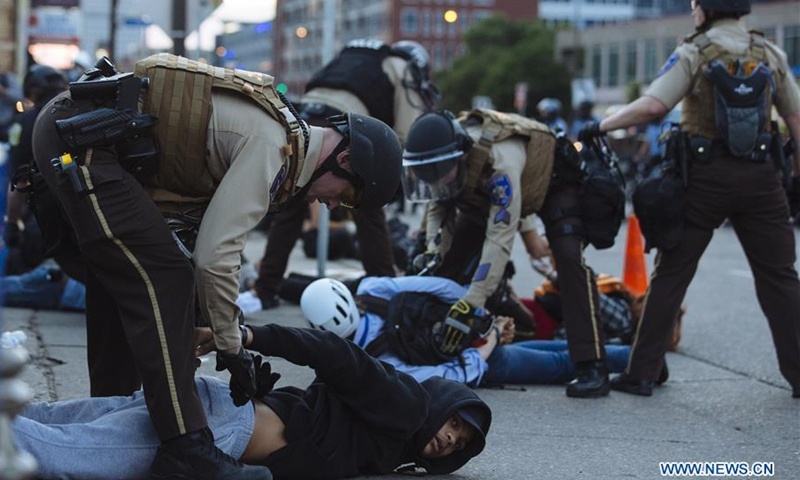 A group of 23 United Nations human rights experts on Friday called on the US to adopt wide-ranging reforms to end the police violence in the country and to vigorously address systemic racism and racial discrimination.

Because of the US' status in the UN, there were rare UN resolutions directly or indirectly blaming the country for its bad human rights records. But right now things have changed. With the development of social media, US abuses of human rights represented by the US police's violent and excessive law enforcement can no longer be concealed.

Racism is a vital part of the US' poor human rights records. Although many US administrations have vowed to address the problem, almost all of them turned out to be just empty words in the end. Hence, even though the Black Lives Matter campaign had raged across the US, many ethnic minority Americans still couldn't escape the US police's brutal violence against them.

According to the Statista Research Department, "the rate of fatal police shootings among Black Americans was much higher than that for any other ethnicity, standing at 34 fatal shootings per million of the population as of January 2021." The rate for Hispanic and Latino Americans stands at 26 per million, and for White Americans, 14.

White Americans used to discriminate against African Americans, but now the whites also feel discriminated against, mainly because of racial quotas that have limited many White Americans from being enrolled into universities or gaining employment. Such a measure to address racism is tantamount to quenching thirst by drinking poisonous water.

Racism is deep-rooted in specific American characteristics. When the US was founded, African Americans were slaves, and the Founding Fathers themselves held slaves. After the American Civil War, black people were granted with several legal rights. But when the clauses had come to implementation, there were various limits. And discrimination against African Americans grew stronger since the 20th century. White supremacy thus has surged in the US society, and even an US administration led by white supremacists was elected. How can racism really be solved with such people at the helm of the country?

Despite its human rights abuses, the US still condescendingly accuses others of violating human rights, using the issue as a card to provoke countries such as China. It continues shamelessly because American elites don't think there is any problem that they have to address at home. They believe the US is a beacon for the globe, a beacon that should be worshiped by the rest of the world. This has been proven illusionary. But the US elites have had their hypocritical stories prevail with their strong manipulative narratives.

Washington has been politicizing human rights issues, listing all countries with different ideologies and values as countries with bad records. It thus attacks them in a bid to find legitimate reasons for its own misconduct internationally. This is hypocritical, and this is precisely American-style manipulation.

However, although their sense of superiority makes the US a fan of pointing accusing fingers at others, the facts and reality in the US have made it hard for Washington to have its accusations accepted by others. This is evident in global criticism over the US' annual human rights report and in the US' attitude toward the UN Human Rights Council.

US Secretary of State Antony Blinken asked all UN members to support the US in its bid to return to a seat in the UNHRC. Blinken used the word "humble" to describe the appeal, which demonstrated the hypocrisy of the US.

The Biden administration knows the importance of assuring a seat in the UNHRC. Being absent in this body, the US has lost a stage to show US superiority of being a "beacon," and lost an arena to stigmatize and demonize the countries it defines as rivals, competitors, or enemies.

The UNHRC is a ready and useful tool for the US to attack other countries under the framework of the UN. Washington is eager to come back. It now acts "humbly" to seek the chance, but it will show another face after its seat to the body is secured. Just look back to see how the US had treated the UN agency when it was a member.

Nonetheless, the US can hardly change other countries' view regarding its human rights records. Now we are living in a different world from the past. In the past, the US relied on outlets like the Voice of America to mislead the world. But now such outlets have used up their credibility, and the internet and social media have helped people know almost everything that happens around the world. Such being the case, it is impossible for the US to fool the world anymore.

The author is a professor at the Institute of International Relations of China Foreign Affairs University.