OPINIONS Bloc will be catalyst for global recovery

Bloc will be catalyst for global recovery 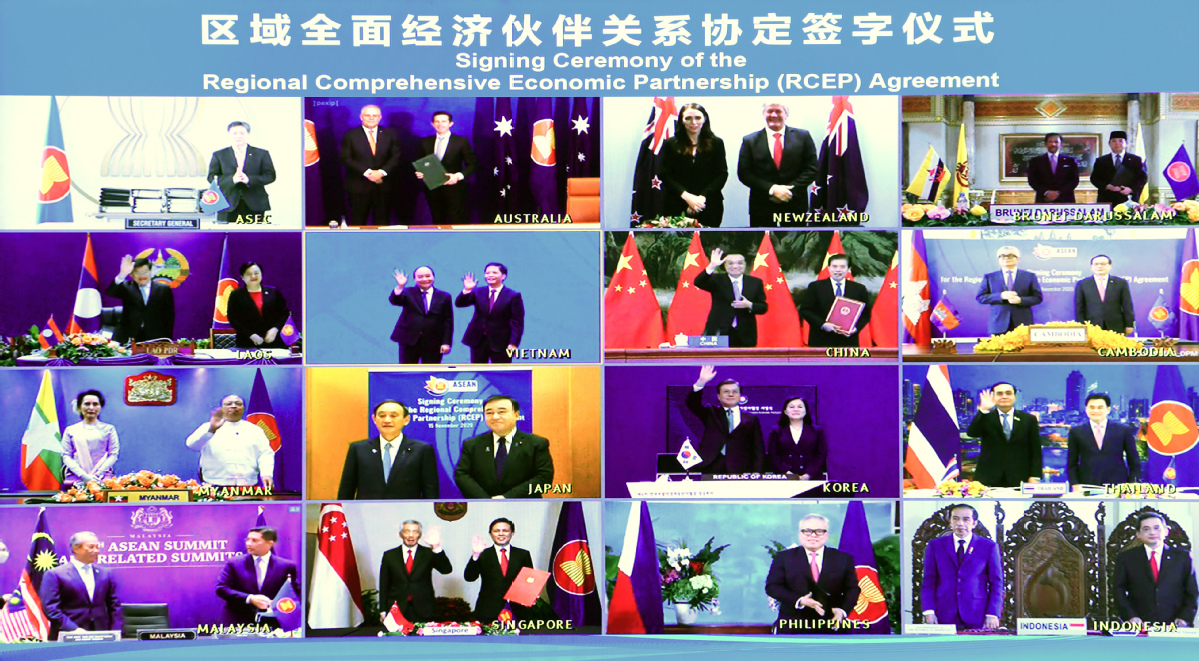 Leaders and trade ministers from ASEAN and the 15 Regional Comprehensive Economic Partnership countries pose for a virtual group photo at a videoconference hosted by Vietnam on Sunday. The countries will form the world's largest trading bloc, encompassing nearly a third of all economic activity. (Photo: Xinhua)

The 21st century is inexorably shaping up to become the golden era of the Asia-Pacific region's economic cooperation, multilateralism and progress, while the world's still biggest but now troubled economy has in recent years fallen backward into perilous protectionism and unilateralism.

In the current context of sluggish worldwide economic growth amid the COVID-19 pandemic, the signing of the Regional Comprehensive Economic Partnership during the Association of Southeast Asian Nations Summit chaired by Vietnam on Sunday is big, positive news that will boost early regional economic recovery and global stability.

The RCEP, a historic milestone for the Asia-Pacific region, creates the world's largest free trade agreement, by population and by GDP. The covered region has a combined population of about 3.5 billion people, with an aggregate gross domestic product of more than $21 trillion, and accounts for more than 30 percent of global trade.

The RCEP augurs a possibly prosperous 2021, especially for Asia. It is expected to speed up economic integration among its 15 members and become a dynamic catalyst for global economic progress.

It further strengthens the Asia-Pacific region, since it is anchored by the presence of Asia's No 1, No 2 and No 4 largest economies: China, Japan and South Korea, respectively, as well as Australia, New Zealand and the 10 ASEAN member countries－Brunei, Cambodia, Indonesia, Laos, Malaysia, Myanmar, the Philippines, Singapore, Thailand and Vietnam.

One exciting factor in the historic importance of the RCEP, and an indispensable key to its success, is the central role of China, the world's world's second-largest economy and largest nation, with a population of 1.4 billion and increasingly affluent consumers.

With its active support of the RCEP, China will further expand its economic and trade partnerships with member countries, deepen its opening-up and reform and thus make greater contributions to win-win prosperity of the Asia-Pacific region.

The RCEP is also the first multilateral free trade agreement of which China is a member. This can pave the way for China to become part of more similar multilateral trade arrangements with other regions or blocs, such as the European Union, and strengthen the Chinese economy's role as a responsible, bonafide member of the global economic order.

The RCEP is a bold, visionary, high-quality, liberal, forward-looking trade deal that will strengthen its Asia-Pacific members' economies for 21st century international commerce. Other regions and economies of the world are challenged to also uphold free trade and healthy competition or diminish their economic relevance. Economies like India that refuse to join the RCEP may suffer from unfortunate disadvantages and lose some opportunities.

Creation of the RCEP manifests the strong political will and consensus of most Asia-Pacific economies in unequivocally upholding the positive principles of multilateralism, dialogue, rules-based free trade and win-win cooperation. In today's world, this is a stark contrast and antithesis to some governments and politicians with their regressive, ultra-nationalist and even unilateral, zero-sum policies.

Under President Rodrigo Duterte and his bold reform of independent foreign policy, the Philippines has vigorously expanded trade ties with all the world's big powers, including the United States, China, Russia and others, particularly normalizing the longstanding friendly diplomatic and economic relations with ancient trade partner China.

Philippine Trade Secretary Ramon Lopez was right to see the RCEP as a mega trade deal with a huge, positive economic impact on the Philippines, saying it will create more jobs and enhance the participation of budding Philippine entrepreneurs and small and medium-sized enterprises in the global value chain.

Indeed, many opportunities will open up for the Philippines and other ASEAN countries, such as better access to big export markets of RCEP members China, Japan and South Korea, as well as Australia, New Zealand and fellow ASEAN neighbors. The agreement will also awaken domestic industries and modernize export companies for higher efficiency and global competitiveness.