The popular (and supposedly credible) New York City-headquartered outlet Bloomberg recently placed the US at the top of its "COVID Resilience Ranking" while putting China in eighth place. This is nothing more than ridiculous information warfare which discredits this media platform. It inaccurately exaggerates the US' successes at containing the pandemic while ignoring its many shortcomings that continue to plague the country's epidemiological security to this day. From the flip side, it ignores China's successes while dishonestly attempting to discredit its effective policies. 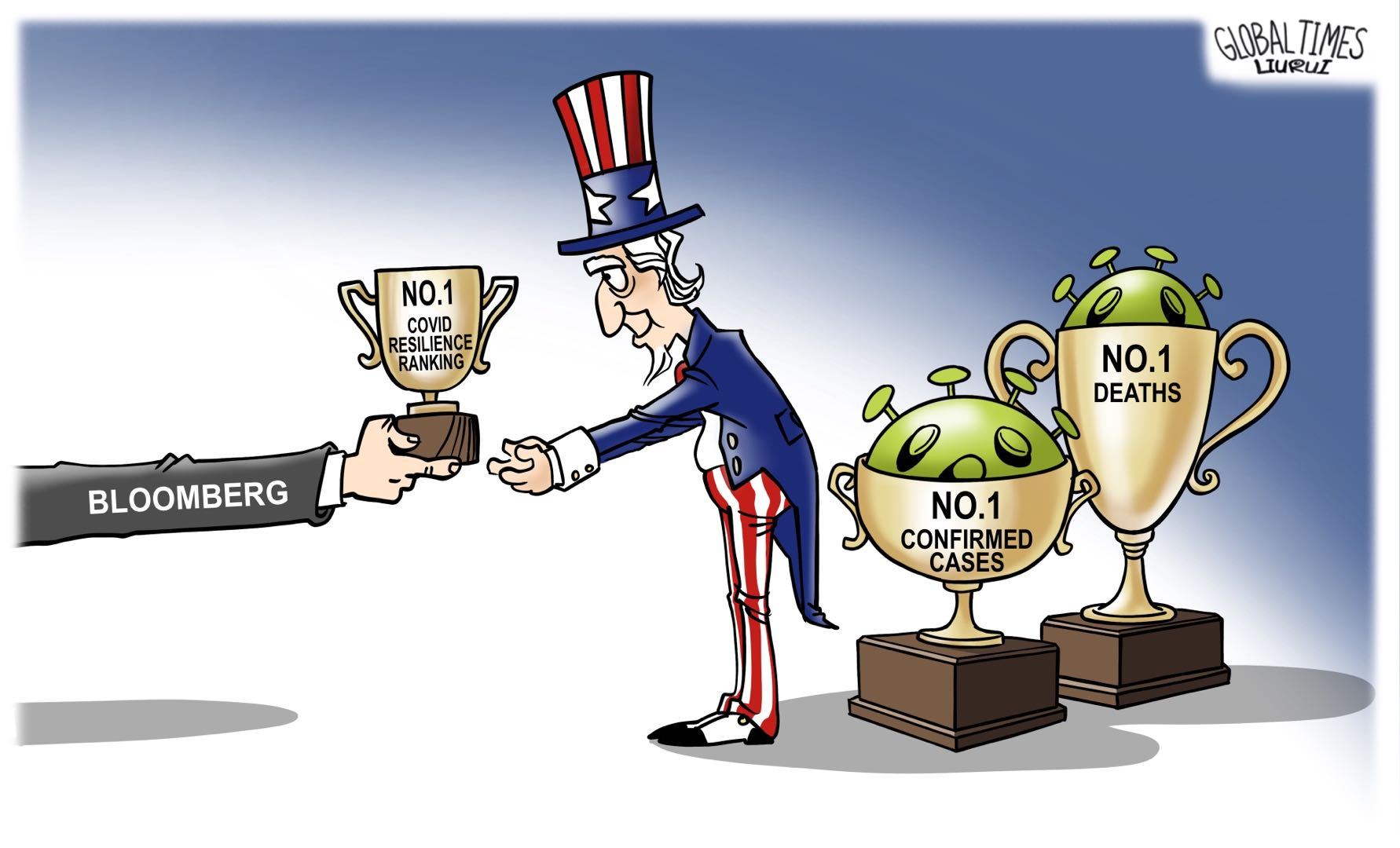 China was the first country in the world to contain COVID-19. It did so due to its coordinated nationwide efforts organized by the Communist Party of China (CPC). There are rarely any new COVID-19 cases in the country, and whenever some are reported, the authorities immediately react in order to isolate the epidemiological threat. The populace complies with these policies because they saw how successful they were over nearly the past year and a half. They also trust their leadership and don't suspect it of ulterior motives.

The same can't be said about the situation in the US. Cases continue to rise, and observers are very concerned about a growing so-called "vaccine divide" between Democrat and Republican areas of the country. Many Americans aren't complying with their authorities' recommended epidemiological advice and view such efforts as a gross violation of their civil liberties.

Objectively speaking, it is much safer for someone to live or travel in China than to do so in the US right now, and that's not even taking into consideration the skyrocketing crime rate in some of US' largest cities. Bloomberg must be fully aware of these facts but chose to deliberately ignore them in order to deceive their audience. The outlet is known for being close to the ruling Democrat elites and might therefore have wanted to portray President Joe Biden's counter-coronavirus efforts as a stunning success despite them being anything of the sort.

It's not that the American leader is personally to blame. This just goes to show that American society is deeply divided along partisan lines - and the epidemic has been politicized by both sides. The Democrats exploited it to sway more voters to their side before last year's presidential election while the Republicans are now doing the same ahead of next year's midterm elections. Both parts of the country's ruling duopoly are to blame for misleading the masses about this apolitical issue of global epidemiological security.

There is no credible way to compare the situation in China and the US right now. Any serious ranking would place China at the top of the list and the US far below it. Doing the reverse like Bloomberg did is a journalistic disservice driven by ulterior political motives of a domestic and international nature. The former were just touched upon while the latter relate to discrediting the CPC as part of the US' ongoing information warfare offensive against the Party.

All relevant structures of the US, including informal ones such as the so-called "fourth estate" of the media (which includes Bloomberg), have ramped up their attacks against China since President Biden's inauguration. Some like Fox News do so directly while others like Bloomberg are less upfront about this. Nevertheless, the end goal is the same, and it's to portray China as epidemiologically irresponsible in order to advance the century's greatest lie thus far that the country is allegedly responsible for the COVID-19 pandemic.

Since that completely false accusation can't be factually proven, the fallback plan has been to raise questions about its handling of the outbreak. Even those attempts have failed in recent months since empirical and scientific evidence confirms that China responded better to COVID-19 than any other country. As such, the only recourse for these information warriors is to publish supposedly authoritative rankings in order to mislead their audiences. But the whole world knows better so this plan won't succeed.

The author is a Moscow-based American political analyst.