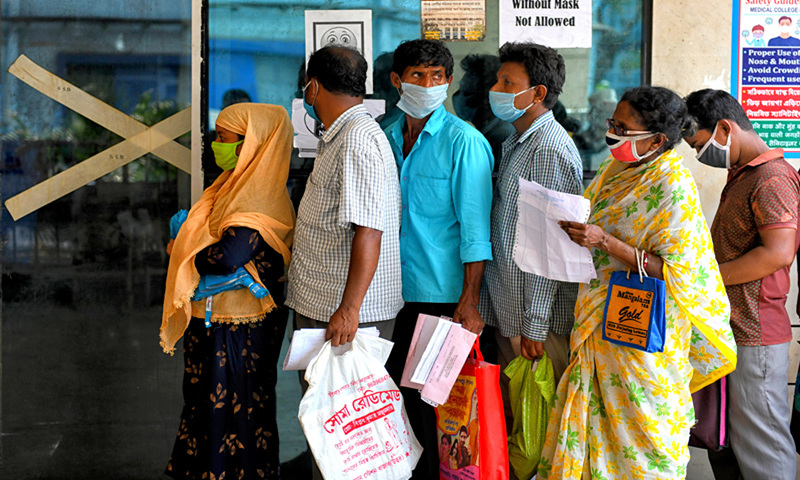 Indian people with COVID-19 symptoms queue for an Antigen Test at a government hospital. Photo: VCG

India’s COVID-19 epidemic has continued to rage on. China has become India’s largest supplier of crucial anti-epidemic supplies such as oxygen generators and ventilators. So far, China has provided India with more than 20,000 oxygen generators and 5,000 ventilators. India has submitted orders to Chinese companies to produce over 40,000 units of oxygen generators. However, Indian public opinion has not expressed its gratitude toward China for the emergency supplies, or it can be said that grateful voices have been very few. In contrast, many narratives have stressed that China's supplies are not aid, accusing China of “exploiting the opportunity to make money,” and claiming that it has "geopolitical intentions" to export these goods to India. Such rhetoric in India is in sharp contrast to their high-profile publicity on help from the US and the West. The Chinese people will certainly be disappointed after reading such opinions.

In terms of public opinion, Chinese and Indian societies have not got along well. Border tensions last year escalated sentiments on both sides, leading to a confrontation of public opinion. India has leaned closer to the US, further solidifying the social divide between China and India. This has become the background in which India is dealing with China in the face of a crisis.

China has made the greatest contribution to India’s current fight against the epidemic. Instead of being purely symbolic, China’s support and help has been very substantial. There is no atmosphere of public appreciation of China’s help in India. There is still a lot of resentment over border frictions and strategic hostility toward China. Out of a sense of pride, India has taken a lot of goods from Chinese companies, but has remained silent toward the fact. Hindustan Times has listed ten countries and regions that have started sending relief materials to India, and what kinds of materials they have supplied. But China is not on the list.

In the face of such a response from India, what should we do? Should we publicly accuse India of “repaying good with evil?” or turn our long-standing grievances toward India into mockery, even gloat about the Indian epidemic? I don’t think it is appropriate for us to be overly sensitive toward India’s reaction, especially going further to mock India's failure to fight the virus.

The official mindset of Chinese society toward India’s epidemic situation must be sympathetic and supportive of their battle against it, and this is indeed the case. I don’t think it’s proper for social media accounts of certain Chinese official institutions or other influential forces to mock India at present.

India has indeed done something wrong toward China. Even today when India is in trouble and China is lending it a helping hand, India still holds a grudge and remains narrow-minded. But currently, our prevailing attitude toward India should be still to show our sympathy and support, without being distracted by other sentiments. There is plenty of time and occasions for us to express our views regarding India. And we do not have to speak up upon them when India is struggling against the virus. We should not respond to radical voices in India, instead we should avoid escalating the spat between China and India among public opinion.

Although India has talked little about it, we have to say that China has done a magnificent job in supplying and supporting India. It is necessary for us to make the world more clearly aware of China’s actual role. Meanwhile, not like the US, the Indian government has not attacked China’s fight against the virus, nor has passed the buck to China. Currently, India is not only falling into a humanitarian disaster, but has become weak in the eyes of the rest of the world. The Chinese government proposed to offer India necessary support and assistance much earlier than Western countries. And our supplies have been provided to them with amazing speed, faster than any other country.

I understand that there are many voices and the public has their right to express various sentiments toward India. So do some figures who have many followers on social media platforms. But our public opinion, especially mainstream opinion, needs to follow the Chinese government’s narratives and moves as a whole, forming the tone of sympathy and support for India's fight against the virus. This is an indispensable part of China's national image.

We need to believe that actions speak louder than words. China’s supplies play a crucial role in India’s battle against the virus. We cannot ignore border frictions between China and India, but the bond formed through China’s substantial support to India’s anti-epidemic fight is also there. China and India are neighbors that cannot be moved away from each other. Apart from many frictions, China is India’s close neighbor which is better than a distant relative in the critical time of a crisis. As long as China does its best to bolster India’s fight against the virus, it will certainly become a factor in shaping Indians’ general perceptions of China.

China is a big country with a long history of civilization. Our national and international outlook has been shaped through thousands of years of experience. We should not be influenced by the logic of power which has been prevailing in the US and the West. When stepping up the construction of hard power, we cannot neglect the significance of “convincing people by virtue.” For China, virtue is not hypocrisy. Instead, it is our dignity and strength, which is one of the cornerstones of our international mobilization.