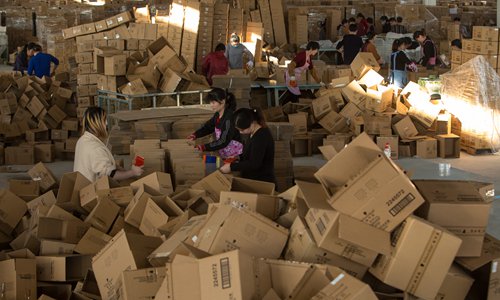 Singles' Day, a major shopping event in China and the world's biggest consumption spree, shouldn't be met with a broad boycott of Chinese and US products in different markets.

Since Washington launched the trade war against China, there has been no shortage of examples when it comes to economic issues being politicized. It seems that China's Singles' Day may be the next target.

If sales across Alibaba's e-commerce platforms decline this year on Singles' Day, it may hurt confidence in the Chinese economy. In the third quarter, the economy grew 6 percent year-on-year, the slowest pace in about 30 years. We need confidence to get through these hard times.

A boycott of Chinese products will be a double-edged sword for both China and the rest of the world. It's almost impossible to calculate the proportion of goods labeled "Made in China" in global consumer spending. Why do those have such a large market share? The reason is simple: most of them are cheaper than their counterparts. Cost-effective Chinese goods have made a major contribution to reining in inflation in the global economy and benefiting low-income consumers.

A boycott of Chinese products really means a boycott of a comfortable and affordable material life. If you want to look at the country of origin on your shoes and all the other things you buy, and choose according to this label, go ahead. But be ready to spend a lot more.

Hopefully everyone can enjoy the shopping spree on Singles' Day. There have also been concerns over whether Chinese shoppers will boycott US goods during the event. It's understandable that some observers think China will fight back against US tariffs on this day to safeguard its interests. However, we don't want to see a boycott of US products.

We hope every country including the US can be further involved and enjoy the world's biggest shopping spree on Singles' Day.