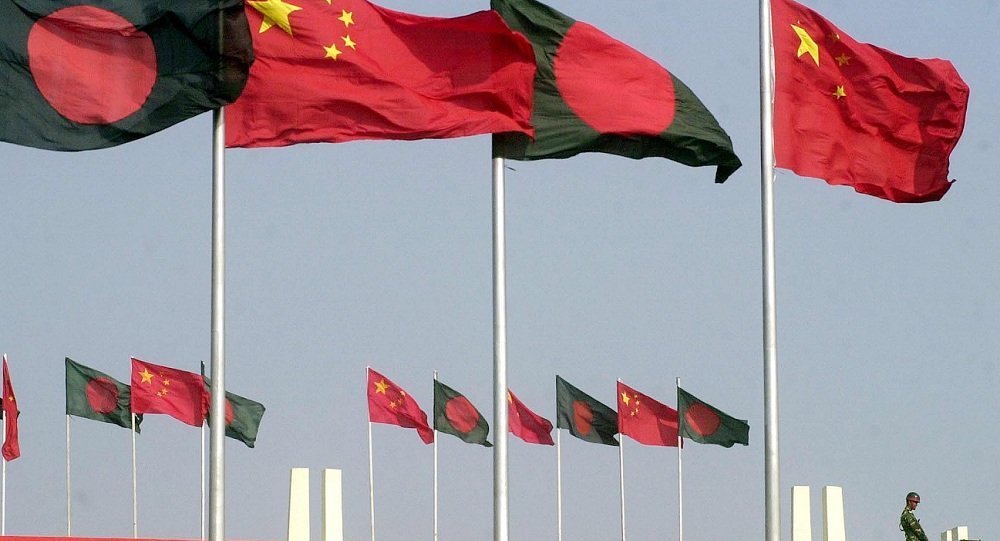 Though Bangladesh doesn't share a border with China, both countries enjoy deep ties - from economy to defense and people-to-people contact. However, economic relations between the friendly nations are the most significant aspect of their ties, which were elevated to a strategic partnership of cooperation in 2016.

China is the largest trading partner of Bangladesh and bilateral trade reached $18.74 billion in 2018. But Bangladesh has a huge trade deficit with China. The China-proposed Belt and Road Initiative (BRI) has created great opportunities for Bangladesh to reduce the trade gap with China. Under the BRI, Bangladesh can diversify its exports to the Chinese markets as Beijing is now more open to lift many tariff and non-tariff barriers.

Economists are of the view that as an important partner of the initiative, Bangladesh can also study the feasibility of a Free Trade Agreement with China which can be an effective tool for reducing the trade deficit. They also think that the BRI has really given a strong and effective platform to Bangladesh for negotiating with China over exporting more items to its huge market.

The BRI can also help Bangladesh fulfill its target of producing 82,000MW of electricity by 2041 when the South Asian nation dreams of becoming a developed country. To reach the target, the country needs massive investment in its power sector and China is expected to be one of the major investors to make Bangladesh self-reliant in power and energy in the next decade.

In order to encourage rapid economic development through diversification of industry, employment, production and export, Bangladesh is setting up economic zones and special economic zones in several areas including backward and underdeveloped regions. Dhaka is offering an attractive package of incentives to foreign investors including tax holiday and citizenship. The BRI cooperation can be a great opportunity for Bangladesh to bring in foreign investors for its economic zones. In particular, Chinese investors and entrepreneurs can play a major role in this regard as China has inked deals worth billions of dollars for development projects in Bangladesh.

As the highest foreign currency earner, garments manufacturing is the main lifeline of the Bangladesh economy. Though Bangladesh is second to China in garments exports, it can lure similar Chinese businesses to expand their portfolio in Bangladesh with its huge labor force and lower production cost. The BRI can help both countries bring about win-win cooperation instead of competition in the garments sector. Like many other sectors, the economic zones of Bangladesh can be used by Chinese businesses to join hands with their Bangladeshi counterparts in the clothing industry.

Bangladesh has achieved remarkable success in poverty reduction in recent years. But 24.3 percent of its population is still under the poverty line, while the rate of extreme poverty is 12.9 percent. It is for this reason Bangladesh has to work hard toward poverty eradication, and BRI cooperation has opened the door to Bangladesh to learn lessons from China about reducing poverty rapidly in a way the East Asian nation has done by lifting 700 million people out of poverty in four decades - a record in human history.

In addition, China has long experience of fighting pollution which the country has identified as one of its major challenges. To face the challenge and eventually reduce the impact of climate change, China has initiated a unique approach named "ecological civilization." It is aimed at bringing harmony between people and nature. China could succeed in making environmental issues a salient feature of its society through this approach. As Bangladesh is the worst possible victim of climate change, it can forge greater cooperation with China over the issue under the BRI. Ecological civilization is more relevant to Bangladesh as the approach can strike a balance between rapid development and environment protection, which is a must for sustainable development.