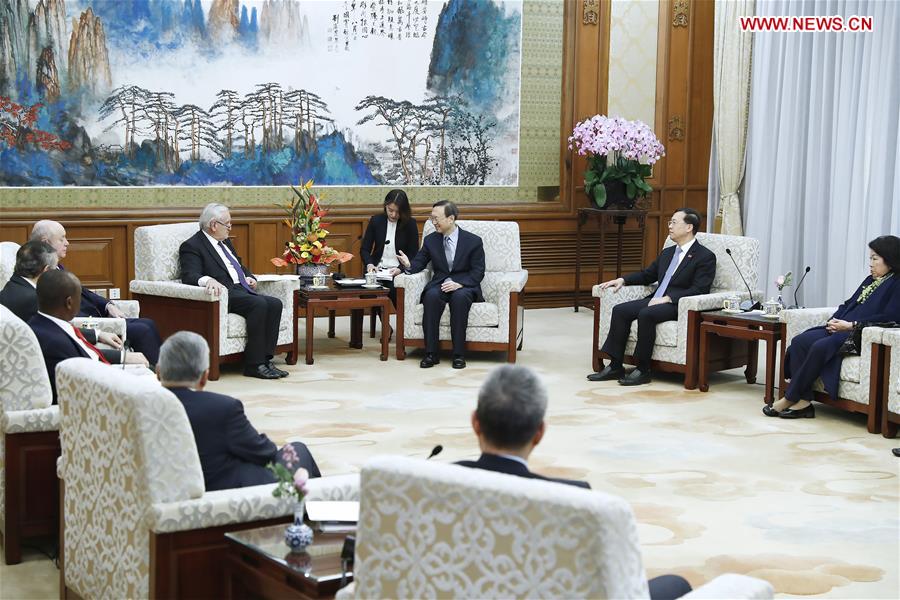 Yang Jiechi, a member of the Political Bureau of the Communist Party of China (CPC) Central Committee and director of the Office of the Foreign Affairs Commission of the CPC Central Committee, meets with the members of the Belt and Road Forum for International Cooperation (BRF) Advisory Council who attended the council's second meeting in Beijing, Dec 22, 2019. (Photo: Xinhua)

Countries should support an open world economy and oppose protectionism in order to achieve high-quality cooperation on the Belt and Road Initiative, said a senior Foreign Ministry official.

Vice-Foreign Minister Ma Zhaoxu, a member of the Advisory Council of the Belt and Road Forum for International Cooperation, said this belief is shared by the other council members, who gathered for their second meeting in Beijing on Sunday.

The council, made up of officials, academicians and former politicians, also supported the development of a network of partnerships on the initiative led by the Belt and Road Forum for International Cooperation, Ma told journalists on the sidelines of the meeting.

They suggested implementing projects to improve infrastructure interconnectivity that are inclusive, accessible, widely beneficial and reasonably priced, he said.

As many as 137 countries and 30 international organizations have signed documents of Belt and Road cooperation with China, according to Ma.

The international community is looking to the initiative for injecting more confidence and driving force in the global economy at a time when the protectionism is on the rise, he said.

Douglas Flint, Britain's special envoy for professional financial services to the initiative, said the initiative plays an important role in the global economy and multilateralism.

Huge investments are required to build economic ecosystems within developing countries and to connect those ecosystems to make trade and investment flows smoother, he said.

Shamshad Akhtar, former Pakistani interim finance minister and former under secretary-general of the United Nations, said the initiative is an open platform, and valuable for both developing and developed countries, adding that her country "has benefited tremendously" from the initiative.

China and Pakistan is cooperating on the China-Pakistan Economic Corridor, a flagship project under the initiative. A number of infrastructures are being developed for the project, including highways, railways and power stations.

The council first met in December 2018 and issued a report of findings and recommendations on the initiative in April.

The recommendations included enhanced synergy between the initiative and other national, regional and global development plans, and improving "soft connectivity" in areas such as standards and customs procedures.