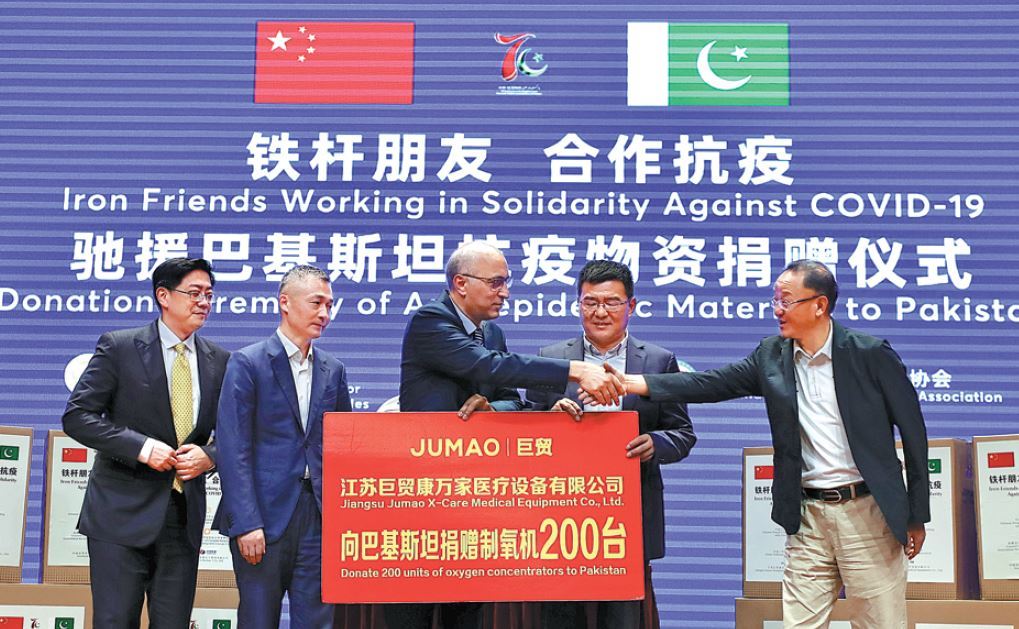 Moin ul Haque (center), the ambassador of Pakistan to China, shakes hands with a company representative to show gratitude for his and other companies' donations to facilitate Pakistan's fight against the pandemic, at a ceremony held by the Chinese People's Association for Foriendship with Foreign Countries in Beijing, on June 24, 2021. (Photo: Zhang Wei/China Daily)

Countries have hailed the major boost that the China-led Belt and Road Initiative has given to global economic recovery and the joint fight against COVID-19.

At an international conference on Wednesday, Beijing offered a fresh proposal to further strengthen the fight against the novel coronavirus and promote interconnectivity, green development and free trade among the countries.

The proposal was made when State Councilor and Foreign Minister Wang Yi chaired a high-level meeting on Wednesday night via video link on international cooperation under the BRI in the Asia-Pacific region.

To deal with the common challenge, Wang called for greater teamwork among countries to provide more medical supplies to countries in need and promote the waiving of intellectual property rights for COVID-19 vaccines.

The meeting, in which dignitaries from 29 countries and some leading international agencies participated, was held at a time when the number of countries that have signed BRI cooperation documents with China has reached 140.

The cumulative trade volume between China and its BRI partners has exceeded $9.2 trillion, and the total direct investment of Chinese enterprises in countries along the BRI routes has exceeded $130 billion.

At the meeting's conclusion, two initiatives proposed by the 29 countries on BRI vaccine cooperation and partnership on green development were adopted.

Armida Salsiah Alisjahbana, executive secretary of the United Nations Economic and Social Commission for Asia and the Pacific, warned that "the countries of Asia and the Pacific are still going through challenging times due to the COVID-19 pandemic".

"We are now experiencing the risk of a multispeed recovery across the region," she said.

Wang said the Asia-Pacific region should be a highland for development and cooperation, not a chessboard for geopolitical games, adding that Asia-Pacific countries are forerunners of and contributors to BRI international cooperation.

Beijing is willing to work with them to promote the BRI's high-quality development, offer Asia-Pacific solutions for the global COVID-19 fight, inject Asia-Pacific vitality into global connectivity, and voice Asia-Pacific confidence for the world's sustainable recovery, Wang added.

He lauded China's proposition that "vaccines should be considered a public good for humanity" and said he believes that vaccine cooperation is in the common interest of all countries.

Colombia is strengthening its relationship with China "on the trade and health cooperation fronts" and in their shared vision of "attachment to multilateralism", he said.

Pakistani Foreign Minister Shah Mahmood Qureshi told the meeting that his country highly appreciates the strong and unwavering support from President Xi Jinping and BRI partners in the journey toward shared prosperity.

He added that the China-Pakistan Economic Corridor, a flagship project of the BRI, complements Pakistan's efforts for a geoeconomic shift with an emphasis on economic integration and regional connectivity.