OPINIONS BRICS has more potential in an uncertain world

BRICS has more potential in an uncertain world 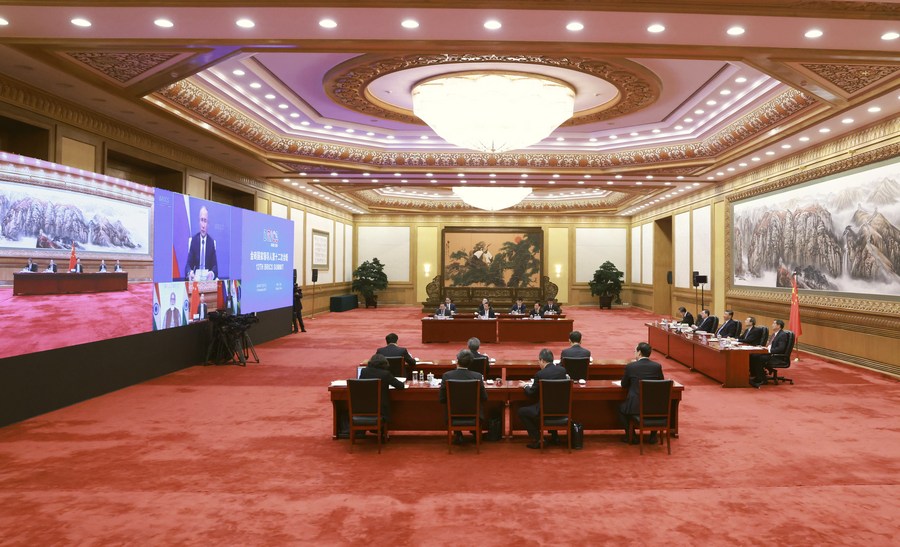 BRICS held its twelfth summit on Nov 17 via video link. This has been an important occasion to enhance solidarity among the member states of BRICS. The world is suffering from a raging pandemic, and two of its members, India and Brazil, are among the top three nations with the most daily confirmed cases.

As China has been leading the world in controlling the pandemic, and in vaccine studies and development, it is an opportunity for China to share its experiences fighting the pandemic with other members. China will be able to play an important role in helping other member states fight the pandemic.

The pandemic has posed an unprecedented challenge to our world. The US with its leading biological research facilities and scientists failed to control the virus effectively, and the first world nations in western Europe have been erratically floundering in dealing with the pandemic.

When the pandemic broke out in Wuhan, China, the US and West were gloating over China's misfortune. Peter Navarro, advisor to President Trump, went as far as to say that the pandemic in China would help bring jobs back to the US.

When China took measures to lock down Wuhan to prevent the spread of the pandemic, the US and the West rushed to criticize the Chinese measures as infringing upon people's freedom and so on. Now, as the whole world struggles with this pandemic, it will show who is swimming naked in the end.

With the slogans of "America first" and "Make America great again," the Trump administration has been withdrawing from many international treaties and organizations in complete disregard of US responsibility as the world's only remaining superpower, further fragmenting the world community.

The world has learned in the last four years that it cannot count on the US to act responsibly as the leader of the world. The unipolar world order is collapsing. This has created both risks and opportunities for the world.

The Trump administration's trade war with its partners, particular with China, caused tremendous damage to the world trading system. In this environment of uncertainty, there is tremendous potential for member states of BRICS to cooperate in many fields. Apart from coordinating their strategy and efforts in fighting the pandemic, they can promote more free trade measures within the group to deal with the slowing down of economic activities in some of the member states. Most of the member states' economies are complementary.

China's economic strength is its leading position in 5G technology development, its manufacturing sector, and having the biggest consumer market in the world with over 1.4 billion people. China can absorb many agricultural products from other member states if China stops buying US agricultural products.

India's strength is its agriculture and service sector, plus having the second-largest population in the world. China has been India's No 1 trading partner in the last few years. Trade between the two nations has been booming. With better understanding and more cooperation between the two nations, the trade potential between India and China is tremendous.

Brazil, as the leading economy in Latin America, is one of the largest exporters of beef, soybeans and tropical fruits. China has been importing a significant amount of soybeans and beef in recent years and exporting manufacturing products to Brazil. As the US declines, there is more trade potential between the two nations.

Russia's strength is in its energy sector. As the world economy slows down, the need for energy has been declining. Russia can step up its collaboration with other members in the energy sector.

South Africa as the leading economy in Africa has strengths in mineral excavation and natural resource development. It stands to gain from more cooperation within the group.

BRICS need to demonstrate to the whole world that it can play an important leadership role in the world in fighting the pandemic and promoting peace.