OPINIONS Businessman in politics: Can Terry Gou make a difference in Taiwan?

Businessman in politics: Can Terry Gou make a difference in Taiwan? 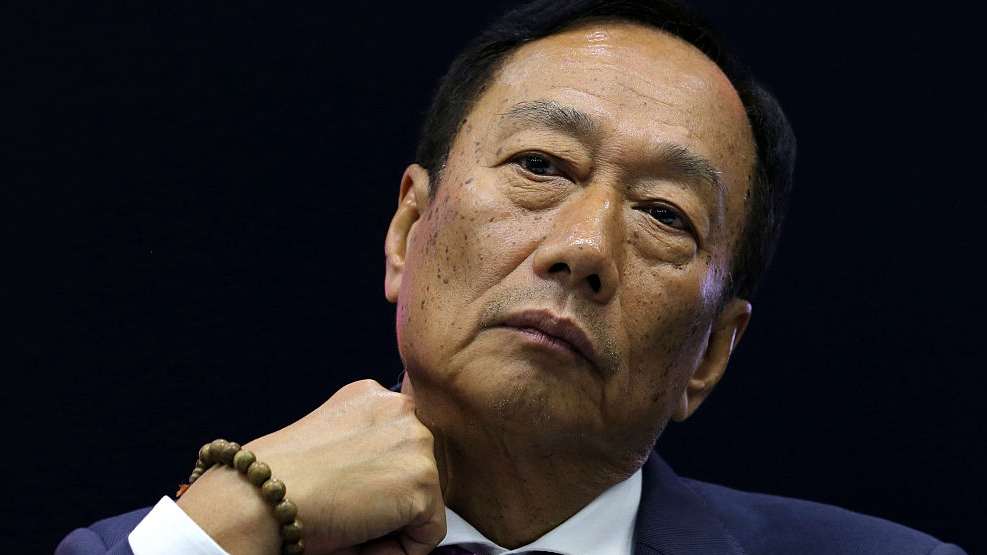 Terry Gou, Foxconn's chairman and the richest man in Taiwan, announced on Wednesday to run for next year's election as the Taiwan regional leader. The news gets people fired up in Taiwan, the Chinese mainland and even overseas. Foxconn's share price climbs on two consecutive days.

The 68-year-old Gou is a mighty rival of the other possible candidates.

He is a star entrepreneur. His business went global by assembling phones and home appliances, including the iPhone, reaching a fortune of 7.7 billion US dollars. He is seen as a legend of the manufacturing industry.

What's worth mentioning is that Gou enjoys high approval ratings according to the latest opinion poll of Taiwan-based Shih Hsin University, which is slightly lower than Han Kuo-yu, a new political star of the Kuomintang Party, but well above Tsai Ing-wen and Lai Ching-te, two members of Taiwan's Democratic Progressive Party who have declared candidacy.

Gou's popularity probably comes from the celebrity effect, but also reflects that the public opinion in Taiwan changes. People want to change.

They are waiting for a leader with a good recipe for the economy. Taiwan's slowing economy makes people lose hope. Though Taiwan authorities always put economic development in the first place during the past 20 years, no one could find a way out.

Besides, people greet a leader who is down-to-earth, instead of strictly adhering to party politics and maintaining self-interests. That's the reason why Han Kuo-yu, a real pragmatist, was elected to be the mayor of Kaohsiung – the third most populated city in Taiwan – beyond all expectations.

What's more, people in Taiwan welcome a leader who can pay attention to people's needs and livelihood, and who's likely to make a difference in their lives.

As a political outsider as well as a boss of a high-tech transnational group, Gou's considered to be more practical and open-minded to get Taiwan out of trouble. His recent propositions demonstrate his insights.

Gou has written down his thoughts about Taiwan's destiny on his Facebook on 13 April 2019, that is "peace for defense, competition for the market, research and development for technology, self-reliance for one's own destiny" He received 28,000 likes and more than 2,000 comments under this post.

Three days later, he emphasized that "there is no security without peace, no future without economy" when he was attending an event.

The proposition differs from other Taiwan's politicians since he is pondering over Taiwan's future with a broad vision and inspiring people to master their own fate instead of relying on big powers.

However, those big powers are casting a covetous eye on Gou; thus the road to be elected as the next leader is set to be tortuous. Taiwan's political situation changed rapidly in the past few weeks, and it's hard to predict the progress.

How could a businessman become a reliable politician? Can he offer more specific and feasible policy proposals to convince the voters? Can he confront the provocations from his opponents and keep predominance?

These challenges are undoubtedly in front of him. However, before he even gets to tackle these problems, he needs to win the party's primary first, which is also not an easy task.