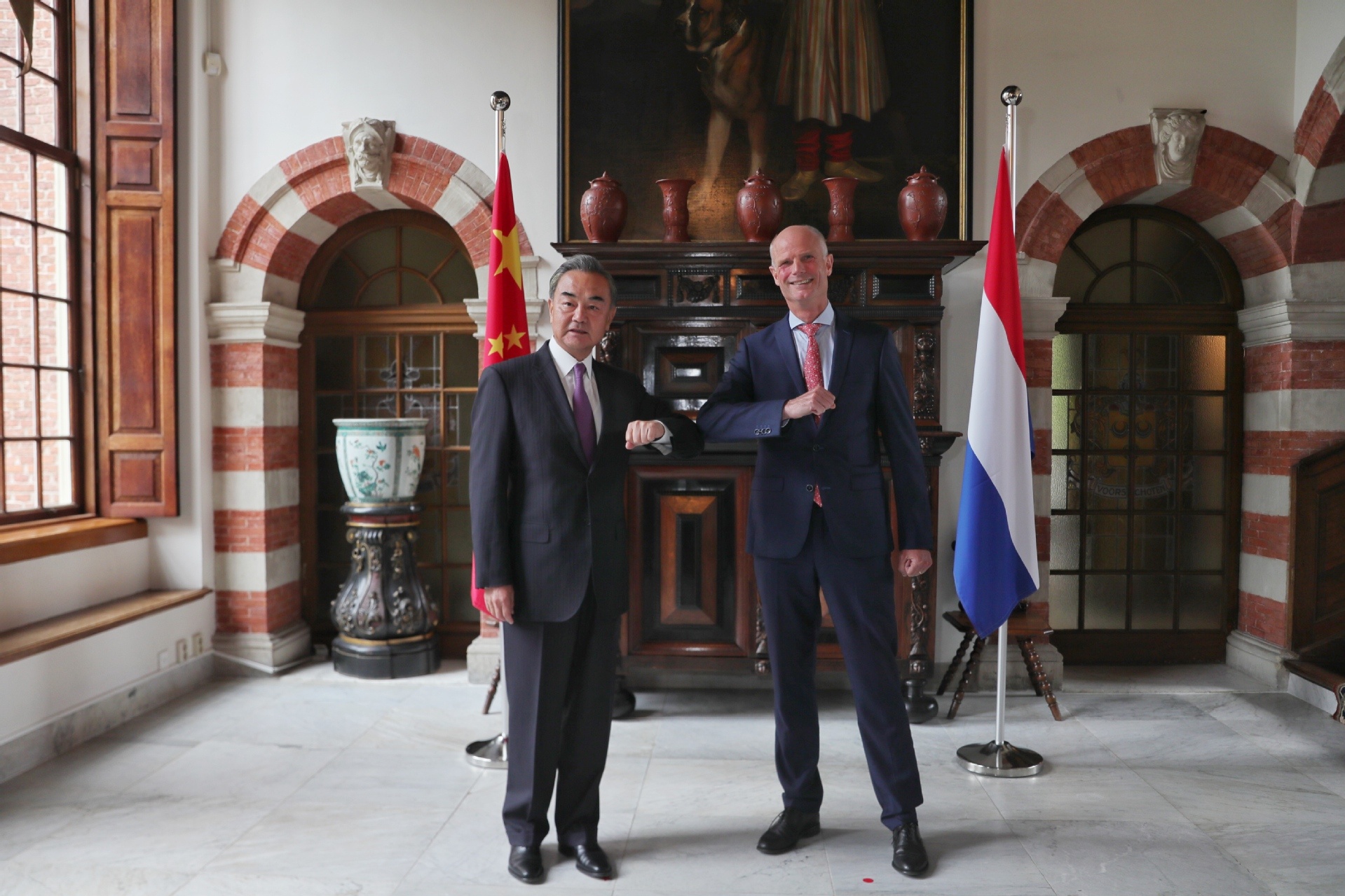 Visiting Chinese State Councilor and Foreign Minister Wang Yi and Dutch Foreign Minister Stef Blok pose for a photo before their talks in the Hague, the Netherlands, Aug 26, 2020. (Photo: Xinhua)

The warm welcome Chinese State Councilor and Foreign Minister Wang Yi received in Rome and the Hague, and the amicable atmosphere in which his talks were conducted with his hosts during his visits to Italy and the Netherlands on Tuesday and Wednesday, despite touching on some sensitive issues, have conveyed an unequivocal message to the world that mutual respect and cooperation remain the foundation of sound international relations.

It is narrow-minded for some to depict Wang's trip to Europe — he will also visit Norway, France and Germany before Sept 1 — as the latest effort of China to pit Europe against the United States.

Wang made it clear in his first stop in Rome that China is unwilling to engage in another Cold War. And as his Italian and Dutch hosts indicated, neither do European countries have any interest in the new Cold War some US politicians are calling for, as Europe is focused on practical cooperation and the resolution of common challenges such as the pandemic and climate change.

Actually, China always attaches great significance to fostering a cooperative relationship with the US, just as it does with its relations with European countries, and the European Union as a bloc.

None of the three purposes China hopes to realize through Wang's trip — to deepen economic and trade cooperation, to stabilize global supply chains and cope with the pandemic, and to inject positive energy into multilateralism and improve global governance — is aimed at driving a wedge between Europe and the US.

Rather than being taken as a signal of Europe siding with China, the friendly discussions Wang has had during his trip should be viewed as the shared aspiration of the international community to set aside ideological prejudices and strengthen cooperation and coordination to weather the storm.

That shared resolve to stand with one another during the crisis is being intentionally distorted by some in Washington, but as a country suffering severely from both the pandemic and its economic repercussions, such solidarity would also benefit the US if it was willing to join the ranks.

In his meeting with Dutch Foreign Minister Stef Blok, Wang warned that without countries working together, the world would be dragged back to “the law of the jungle”, which he said would be to reverse the course of history.

As always, China is ready to share its development opportunities with the world, and open its door wider to help realize common development. Its selfless assistance to Europe and other hard-hit countries and regions in the pandemic, including the US, speaks volumes of the goodwill it has toward the world and its strong sense of duty as a major country.

Rather than a new Cold War, China hopes countries will build a community of warm, cooperative relations.