BEIJING, Jan. 2 (Xinhua) -- The glittering crystal ball still dropped in the Times Square in New York as usual on the New Year's eve. Only this time was the festive moment of confetti joined virtually because of the raging pandemic in the United States. 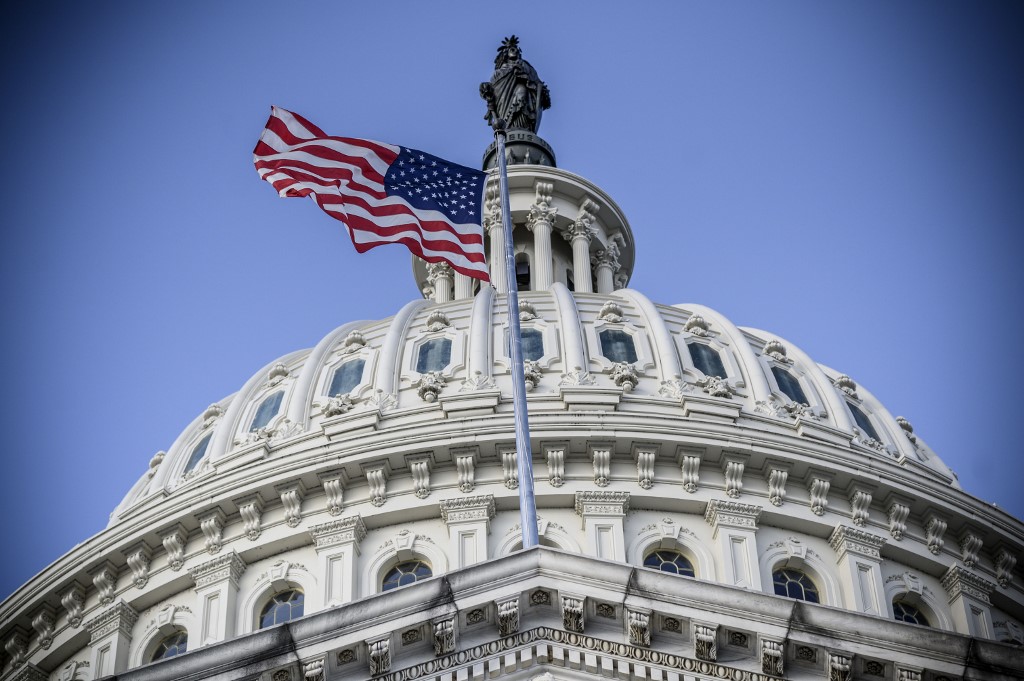 In this file photo taken on December 29, 2020 the US Capitol building is seen on a cold and sunny winter day as Congress is in session in Washington. (Photo: AFP)

As families were celebrating a highly unusual New Year's Day on Friday across the United States, the start of 2021 marked another grim milestone of the country's seemingly out-of-control outbreak: 20 million infections, according to the latest tally by Johns Hopkins University.

The hard yet inevitable question is: how many more infections or deaths are needed so that Washington politicians can finally start to replace callousness, chaos and ignorance with common sense, empathy and action in the country's fight against the virus.

A public health crisis of such an unbelievable proportion calls for a swift, rational, and collective response. That is exactly what has been missing in the United States since the start.

In some sense, the lack of an aggressive nationwide strategy against the deadly pathogen is deadlier and much more devastating than the virus per se.

At the early stage of the outbreak in the United States, the federal leadership squandered time that they could have used to get prepared and organized.

For the sake of political self-interests, some Washington politicians kept playing down the pandemic, feeding lies to the public and stigmatizing other countries. They even pushed for an immature reopen of businesses and schools, only triggering one surge in new cases and deaths after another.

When the Great Depression was hitting the United States hard in the 1930s, then US President Franklin D. Roosevelt gave "Fireside Chat" via radio regularly, seeking to bring comfort and strength to his countrymen in a time of an arduous crisis.

"Let us unite in banishing fear," he famously said in his first chat. "Together we cannot fail."

The tragedy in America today is that the leadership in Washington seems to be working against the welfare of the American public at a time when it is needed the most.

That's part of the reason why it took the United States over nine months to register the first 10 million cases, while only two months for the second 10 million.

An anti-intellectualism is also strikingly dumbfounding in the US response to the virus.

Some US politicians considered it as "a flu" and told reporters that the virus would eventually disappear like a miracle.

Mask-wearing and social-distancing, proven measures to contain the spread of the virus, have been politicized as a litmus test and a political wedge issue to bring the deeply-divided country further apart. It is not that those politicians do not know what is the right thing to do. On the contrary, it is political calculation that has blinded their conscience.

And this week, the country started its COVID-19 vaccine rollout nationwide. Washington politicians are dreaming to terminate the pandemic with vaccinations, and vaccinations only. Also, the country has a frantic hoarding of vaccines. Those politicians need to know that vaccine nationalism will not save the United States, but prolong the pandemic and increase the costs of the global fight against the pathogen.

Anthony Fauci, the nation's top infectious disease expert, warned recently that the distribution of a COVID-19 vaccine does not mean people should drop "normal, standard public health measures." "It's not a substitute, it complements it," Fauci said in an interview with MSNBC.

While the infections and deaths continue to spike in the world's most powerful economy, the raging pandemic has further exposed the deep-seated problems engulfing the highly fragmented US society.

The conflicts between the rational and the irrational, the gap between the rich and poor, as well as the irreconcilable partisan divide have distracted the public, worsen the situation, and eventually paralyzed the control and prevention efforts.

Racism, scepticism and conspiracy theories are fueling those disagreements and splits, and partisan clashes are everywhere from coronavirus hearings to the COVID-19 relief negotiations.

While the cold-blooded and toxic political maneuvering has no end in sight, the American public has become the victim.

The US annual deaths cracked 3 million for the first time and made 2020 the deadliest year on record, while the life expectancy dropped as much as three full years, said Robert Anderson of the Centers for Disease Control and Prevention of the country.

Kenneth M. Johnson of the University of New Hampshire said the pandemic will cause deaths to outpace births in more than 50 percent of US counties this year, the first time in US history, according a recent report of the Guardian.

A thought-provoking episode in the Newsroom TV series is when anchor Will McAvoy was asked how America is the greatest nation on earth. "It's not ..." McAvoy told the college girl who asked the question.

Probably it used to be. But the American failure today is transpiring in a systematic way.

"The COVID-19 debacle has also touched-and implicated-nearly every other facet of American society: its shortsighted leadership, its disregard for expertise, its racial inequities, its social-media culture, and its fealty to a dangerous strain of individualism," an Atlantic article said.

It is hoped that when the next time the crystal ball drops, the celebrating crowds can once again hug each other at the Times Square, instead of watching TV at home. But for that to come true, the best of the country needs to come back.