Can China, Japan and ROK escape the 'Northeast Asian Paradox'? 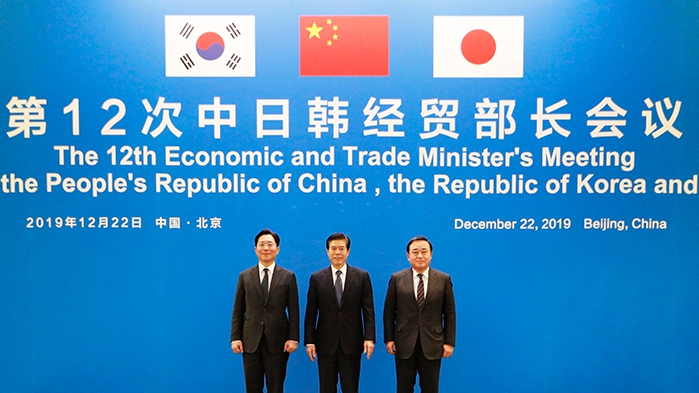 On December 22, just two days before the 8th Trilateral Leaders Meeting, China, Japan and the Republic of Korea (ROK) held the 12th Trilateral Economic and Trade Minister's Meeting in Beijing. They released a joint statement to further strengthen and develop economic and trade cooperation, including improving mutual trade and investment, promoting an early conclusion of the Regional Comprehensive Economic Partnership (RCEP) agreement and the negotiation of China-Japan-ROK free trade agreement as well as fighting against trade protectionism and pushing forward the multilateral trade system.

Trilateral cooperation will surely boost regional economic growth as economic interests serve as the cornerstone of China, Japan and ROK trilateral relations. After the Cold War, Japan and the ROK have continued to expand investment in China, deepening economic reliance among the three.

In 1999, then Chinese Primer Zhu Rongji, then Japanese Prime Minister Obuchi Keizo and then South Korean President KIM Dae-jung decided to push forward their trilateral cooperation to deal with Asia's financial crisis. In 2011, the three members decided to set up a trilateral cooperation secretariat in Seoul. In 2018, China became the largest trade partner to both Japan and the ROK while they are respectively China's first and second-largest source of investment.

Nowadays, the economy in Northeast Asia is once again clouded by various gloomy risks, especially the Trump administration's obsession with trade protectionism. That drives China, Japan and the ROK to show their willingness for deeper cooperation, try to boost regional investment, export and consumption confidence, and defend against "Trump shock."

Northeast Asia is the most populated, energetic area with complex interests intertwined in the world. Generally speaking, regional cooperation will gain support from regional members, such as RCEP. But a few regional countries are more concerned about their comparative benefits, such as the protection of weak industries and regional influence, which has led to the suspension of RCEP negotiations.

Sometimes tense struggles develop between the three nations. For example, Japan strongly protects its agriculture from China and the ROK, and the ROK is concerned about losing its comparative advantages in a new trilateral free trade agreement – the Sino-ROK free trade agreement. East Asian regional cooperation is complicated, and it needs China, Japan and the ROK to work together to make a breakthrough.

The trilateral ministers' meeting will also be helpful to ease regional tensions. Northeast Asia is the only area with a Cold War heritage, and it has built a contradicting structure of economic interdependence with security confrontation, which some international watchers call the "Northeast Asian Paradox."

The US continues its offshore balancing strategy for Northeast Asia, maintaining its alliances with Japan and the ROK while employing "divide and rule" measures among China, Japan and the ROK.

Since 2018, it publicly claimed China as "a strategic competitor" to exert "maximum pressure." The US has not yet normalized its relationship with the Democratic Republic of Korea (DPRK), which has led to a nuclear crisis. Japan, on the other hand, refuses to admit its WW II crimes and firstly has excluded the ROK from its "exportation white list" to rebuke the ROK's assertion of "forced labor" and "comfort women."

China will continue to work with Japan and the ROK to safeguard regional peace and build a prosperous Northeast Asia. China will embrace more bilateral, regional and global cooperation. The trilateral cooperation among China, Japan and the ROK has become an important platform to promote pragmatic cooperation on trade and logistics, expand mutual understanding and friendship, persuade Japan to openly admit its historical crime, and set up a successful example to bridge hostile regional players based on common interests. The Sino-Japan-ROK trilateral cooperation will give its role a full play in breaking the so-called Northeast Asian Paradox.