OPINIONS Can France's Macron bring Lebanon back from the brink?

Can France's Macron bring Lebanon back from the brink? 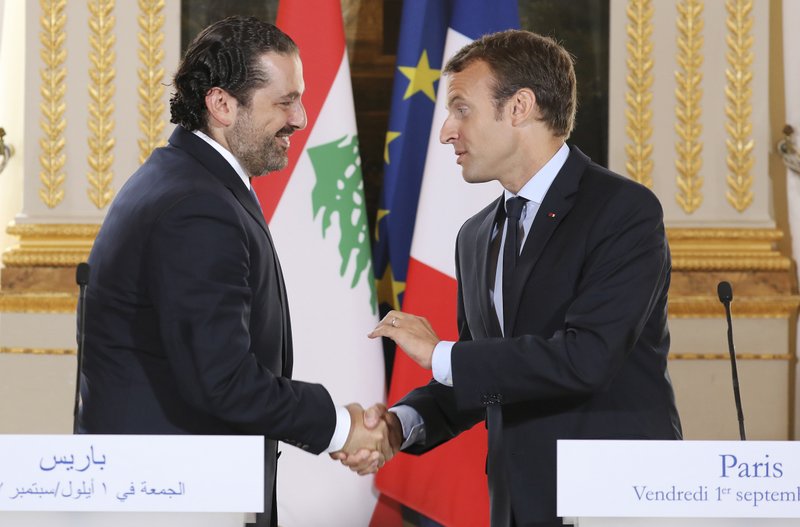 He’s trying to defuse Lebanon’s political crisis and preserve regional stability by leveraging France’s trade relations with rival players in the region and historical ties to its former protectorate.

It’s a risky gambit, but Macron may be better placed than anyone right now to succeed.

Much will depend on what happens when Lebanese Prime Minister Saad Hariri comes to France and meets Macron on Saturday. That’s assuming Hariri is allowed to leave Saudi Arabia, where he may or may not be held against his will since a bizarre resignation attempt that stunned Lebanon.

Macron says he invited Hariri and his family for a few days and wants him to return to Lebanon soon.

While Macron insists that he’s not offering “exile,” Hariri’s return could be complicated by Lebanon’s internal tensions. Analysts say France, where Hariri frequently stays thanks to decades-old family ties here, could be a safe place to wait those out.

The invitation is part of what’s shaping up as a broader Macron strategy to reassert French influence in the region, while the United States under President Donald Trump is increasingly seen as unpredictable or disengaged.

Macron’s office said France’s strategy is to talk to all powers in the region and not to appear as choosing a camp.

That’s especially important, and delicate, when it comes to Lebanon. Saudi Arabia is locked in a feud for influence in the region with its main rival, Iran — and both countries support opposite sides in Lebanon.

Hariri announced his resignation from Saudi Arabia two weeks ago, citing concerns over meddling by Iran and its Lebanese ally, the Shiite militant group Hezbollah, in regional affairs. The resignation was seen as engineered by the Sunni Saudis and raised fears that it would drag Lebanon into the battle for regional supremacy.

France, meanwhile, has centuries-old ties to Lebanon and “a duty of care vis-a-vis Lebanon that is a deeply ingrained part of French foreign policy,” said Francois Heisbourg, chair of the International Institute of Strategic Studies.

Hosting Hariri in France “doesn’t give any idea of a political solution to the problem” in Lebanon, Heisbourg said, but “there is some advantage in trying to calm down ... a country which abducts foreign prime ministers.”

Since taking office six months ago, Macron, a pro-European who advocates for the “benefits” of globalization, has sought to boost his international stature. France, with one of the world’s biggest diplomatic networks, wants to use its influence as a veto-wielding U.N. Security Council member and a major European power.

After an unexpected stop in Riyadh to meet Saudi Crown Prince Mohammed Bin Salman on Friday, Macron discussed Lebanon’s crisis Wednesday with U.N. Secretary-General Antonio Guterres, and held a flurry of phone calls this week to set up Hariri’s arrival.

Macron seems to want not only to cool panic in Lebanon but also to rein in Saudi anger at rivals in the Gulf.

A French diplomat said France is using these exchanges to push Saudi interlocutors about not interfering in the affairs of other countries in the region. The official was speaking anonymously because he was not authorized to be publicly named according to government policy.

At the same time, Macron is seeking to keep a good relationship with Iranian authorities. He plans to visit Iran at the beginning of next year.

Yet at the time, Chirac was perceived as favoring the Saudi-backed Hariri camp, said Denis Bauchard, former diplomat and Mideast expert at the French Institute for International Relations. Chirac was a close friend to Hariri’s slain father, Rafik Hariri — and the Hariri family loaned its Parisian apartment for years to Chirac after he left the presidency in 2007.

“France cannot substitute for the United States in the region. (Macron) doesn’t have the intention or the means to do that, but he can try to play a role” of mediator, he said.