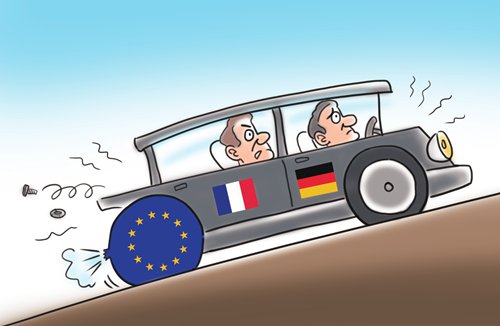 Illustration: Liu Rui (Photo: Global Times)
French President Emmanuel Macron has shown his ambition recently. Probably out of the impulse to rejuvenate the French nation, the young president chose to support the US and the UK on the Syria issue. Among all the European leaders, Macron is US President Donald Trump's most intimate counterpart. He visited Washington DC as "spokesman of Europe," and suggests preserving the 2015 Joint Comprehensive Plan of Action, or Iran nuclear agreement. And partly because of Macron's influence, Trump postponed steel and aluminum tariffs on the European Union. However, what really bothers Macron is how to restart the Franco-German axis and promote euro zone reform and the rejuvenation of the European Union.
These issues are all about France's own destiny and long-term peace and stability. Consequently, Macron visited Berlin, Brussels and Strasbourg - the official seat of the European Parliament - to persuade members of Germany's Bundestag and the European Parliament to support his European reform plan.
The main part of a French-version reform is the same as Macron's 2017 Sorbonne speech, including turning European Stability Mechanism into a European Monetary Fund and setting up a common budget in the euro zone. However, the meticulous Germany was not impressed by Macron's passion.
Although German Chancellor Angela Merkel said "there is a wide agreement between France and Germany" on EU reform, she emphasized that the cooperation between France and Germany is always out of different considerations, and "compromise" is of great importance.
France's main problem is, faced with the risks of the reform, its economic strength does not match its great ambition of being the leader of Europe. The results of Macron's reform are still unknown in the short term, and his suggestion to carry reform into other areas has faced objections from French society.
Consequently, in his opinion, domestic reform and euro zone reform are complementary. Persuading Germany to put more money into the euro zone can stabilize the market and create a better environment for the French economy and so win more time for his domestic reform. Once France gains its economic vitality, it earns the status of being a "leader of the EU," and can further push EU reform. However, as the biggest investor, Germany is obviously more cautious about the risks and anticipated profits, and will not totally accept France's radical reform plan.
The 2019 European Parliament election is coming, and Macron's La République En Marche! still needs to fight for seats in parliament. The result of the election can be seen as the first opinion poll on Macron's leadership. If the result is not satisfactory, euro zone reform might come to nothing and the reformer's leadership may not last long. Although Macron expressed his ambition in the European Parliament, most parliamentarians told the young man to be realistic, as was expected.
The purpose of Macron's reform is to set up a transfer union in the euro zone so as to narrow the development gap between southern and northern Europe. As much as the reform depends on northern European countries' investment, it triggered new disputes.
Eastern and western Europe countries also face differences in politics: a huge obstacle for European reform. Most of the dissenting Central European and Eastern European countries are less developed non-euro zone economies and they will be left farther behind if the euro zone embraces a more rapid development after reform.
Although France and Germany have troublesome domestic affairs, they collaborate in confronting strong-willed Trump, or at least seem to. Merkel also visited the US following Macron's visit and she also hopes to make the US retain a strategy which benefits France, Germany and even Europe.
Will Merkel achieve her goal? And will France realize its dream of major power status? The answers may be revealed soon.