US Secretary of Defense James Mattis' visit to China last week came amid rising tensions between the two nations. This is the first visit to China by a US defense secretary in four years and the first by a defense chief under US President Donald Trump. 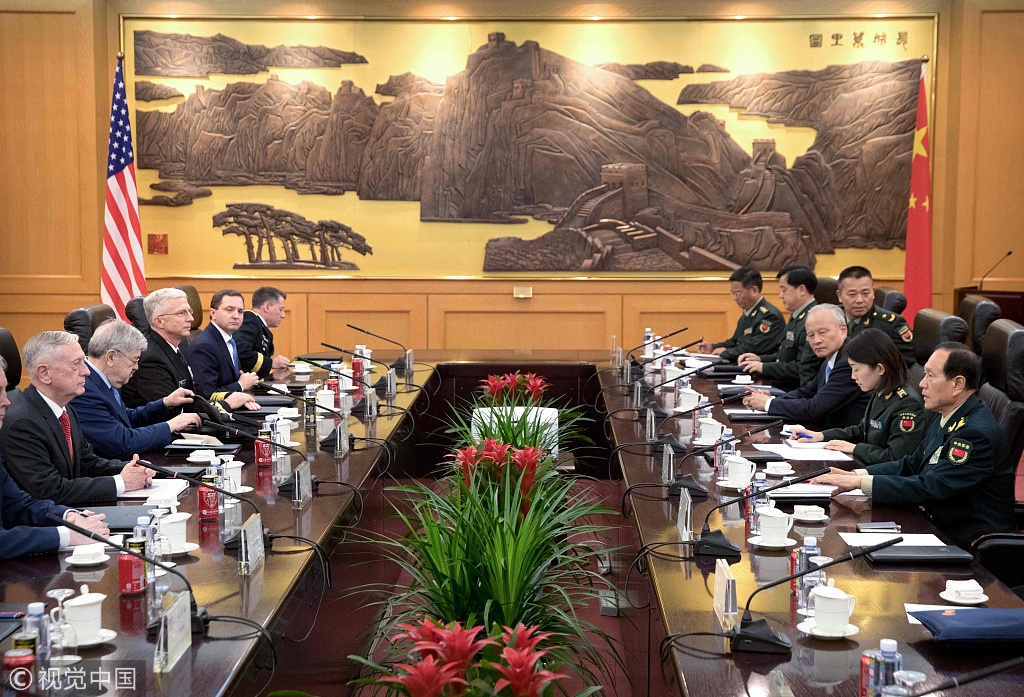 At a time of frequent sparring between China and the US and estranged military ties, it is necessary to keep lines of communication in top form.

In recent years, with the narrowing of the gap in strength between the two countries, there has been a surge in Sino-US competition. The US' strategic containment of China has intensified, particularly on the military front.

Since Trump took power, the new version of the US National Security Strategy labeled China a "revisionist power" and a US rival. In issues such as trade, Taiwan and the South China Sea, Washington has exerted more pressure on China.

In the South China Sea row, the Trump administration focuses on what it calls freedom of navigation operations, compared with the Obama administration's practice of blaming China for island-building. It has also handed over the rights of US carriers to patrol the South China Sea to the Pacific Command. All these have led to more patrols by the US fleet in the region and made their reconnaissance activities all the more risky and provocative.

During the first one and half years since Trump took power, the number of patrols by US ships in the South China Sea almost equals those during eight years of the Obama administration. Meanwhile, as the US warships get closer to the territorial domains of Chinese islands, there is heightened risk of clash between the two militaries at sea.

As for the Taiwan question, Washington has frequently challenged Beijing's bottom line. Right after Trump became president-elect, he claimed that the one China policy can be traded. The crisis was resolved only after bilateral communication and he said that the US government adheres to the policy.

However, earlier this year, Trump signed the Taiwan Travel Act into law. The US endorsement of the act has increased the possibility of military friction or even confrontation between China and the US.

Meanwhile, in face of China's rising military strength, the US has put in place the third countervailing strategy, trying to weaken China's defense modernization. This will dent the security cooperation between the two countries. A typical example is the Pentagon's withdrawal of the invitation to China to participate in this year's Pacific Rim exercise.

Mattis' visit to China will help stabilize military ties between China and the US. Although Mattis said he would just "do a lot of listening," such "listening" will help enhance mutual understanding and reduce the risk of friction and confrontation between the two sides.

For both, it is increasingly important to manage strategic differences and prevent military escalations. Only when the two reach an agreement on avoiding military clashes, can bilateral relations develop. As for the development of defense ties between the two sides, both need to work on that. They can enhance communication at senior military levels and strengthen the systematic buildup of conflict prevention and crisis management. They can also increase joint military exercises and training to improve mutual understanding and engage in more multilateral security cooperation to reduce speculation among regional countries and boost confidence in their military cooperation.

The author is secretary-general of the International Security Study Center at China Foreign Affairs University.