OPINIONS Can SAARC recapture its influence in South Asia?

Can SAARC recapture its influence in South Asia? 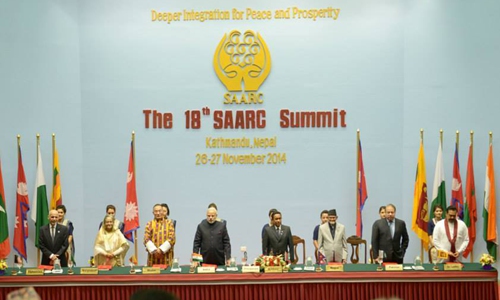 "Australia is an observer of SAARC [South Asian Association for Regional Cooperation], which brings our two countries to work within a framework of regional cooperation as well," said Nepal's Foreign Minister Pradeep Gyawali on Saturday to mark 60th year of diplomatic relations with Australia.

Other observer countries and regions to this organization of South Asian countries include China, the US, Japan, South Korea and the European Union.

Gyawali's latest reference to SAARC is an indicator of Nepal's continued commitment to that body, which has virtually remained dormant since Kathmandu hosted the 18th summit in November 2014. Shortly before it ended, participants from Afghanistan, Bangladesh, Bhutan, India, Maldives, Nepal, Pakistan and Sri Lanka announced their next biannual meeting would be hosted by Pakistan in November 2016. They had unanimously agreed on the date and venue of the 19th summit that was to include India's Prime Minister Narendra Modi and Pakistan's Prime Minister Nawaz Sharif. Persuaded by Nepal's prime minister at the time, Sushil Koirala, Modi and Sharif publicly shook hands to assure the region, and the world at large, that they would work together for the region's well-being. In other words, bilateral differences or acrimony would not impede the process that was initiated in 1985 for the region that is home to 1.7 billion people.

Pakistan was chosen as the country to host the mega event of 2016 because the SAARC charter requires the host of the next meeting is chosen by alphabetical order. Subsequently, that gave Pakistan time to make preparations for the upcoming summit. However, new disputes pertaining to border skirmishes in the Kashmir area angered India, which pulled out of the scheduled summit just weeks before it was to take place in Islamabad. Sensing New Delhi's uneasiness, some other member-states declared that they too would pull out from the planned event. Meanwhile, Pakistani diplomat, Amjad Hussain B. Sial, assumed the office of SAARC Secretary General at the secretariat located in Kathmandu. It was unlikely to enthuse India.

As founding member and the current chair, Nepal views that the ongoing stalemate as a temporary phenomenon: once the current phase of hostilities subsides, as they have in past, India and Pakistan will recall their public pledge to work for the betterment of the entire South Asian region. Nepal's incumbent prime minister, Khadga Prasad Sharma Oli, appears optimistic in his belief, and commitment to regional cooperation. The most recent occasion was on February 7 when he visited the SAARC secretariat. "It [SAARC] represents hope of over 1.7 billion people of this region for accelerated economic growth, social progress and cultural development," Oli said during his visit which attracted extensive media coverage.

In 2018, Nepal hosted leaders of the countries belonging to the group called the Bay of Bengal Initiative for Multi-sectoral Technical and Economic Cooperation (BIMSTEC). This group, launched in 1997, includes five SAARC members and two countries from Southeast Asia: Myanmar and Thailand. Two other SAARC members, Afghanistan and Pakistan, are not members of BIMSTEC, which is why India attaches considerable importance to this entity. Indian leaders and leading diplomats have made public pronouncements aimed at ultimately developing BIMSTEC as a security alliance of member-states. But Nepal has declined to be drawn into the plan as country's constitution requires it to remain non-aligned to any security alliance or military bloc.

Nepal also believes that BIMSTEC cannot be an alternative to SAARC. The geographical area, historical perspectives, demography and cultural dimensions the SAARC cover a far wider area and are much more relevant to the region. Myanmar and Thailand are already in another Asian body, ASEAN. In the early 1980s, president Ziaur Rahaman of Bangladesh and King Birendra of Nepal articulated their vision to form a South Asian group of seven countries. Initially, Afghanistan was not among them. Its application for membership was approved only in 2005, during the Dhaka summit. It formally joined SAARC in April 2007.

The Dhaka summit is also remembered for its acceptance of China as an observer. Nepal's King Gyanendra proposed giving China observer status despite opposition from some quarters. Afghanistan's full membership was proposed by India as a counter move, although Nepal was not enthusiastic about this idea in view of the continued presence of American troops there.