OPINIONS Can Tokyo be a good mediator in Washington-Tehran tensions?

Can Tokyo be a good mediator in Washington-Tehran tensions? 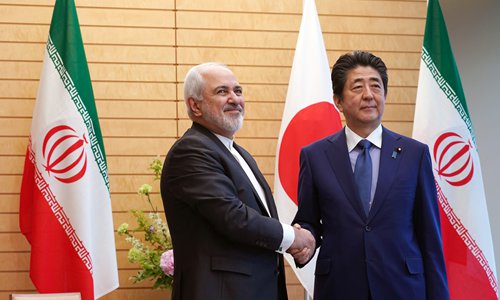 It was reported by Japanese media recently that Japanese Prime Minister Shinzo Abe would visit Iran in mid-June. Citing government sources, leading Japanese newspaper Yomiuri Shimbun said that during the recent visit to Japan, US President Donald Trump supported Abe's decision to mediate US-Iran tensions. If Abe visits Iran, he will be the first prime minister to go to the Middle East nation since the visit of Japanese prime minister Takeo Fukuda in 1978. What's behind Abe's decision to visit Tehran? What will be the effects of such a visit?Tokyo and Washington are traditional allies with aligned diplomatic, military and security interests. At the same time, Japan has good relations with Middle Eastern countries, Iran being one of them. Japan is a country with scarce natural resources. However, as the third largest economy, Japan needs a large amount of energy to develop. It relies on importing oil and gas, a huge amount of which is from Middle East nations. Japan's Middle East diplomacy is essentially energy diplomacy. Iran is one of Japan's major exporters of energy. According to The Diplomat, Tehran was Tokyo's sixth largest crude supplier in 2017. Thus, Japan has its own interests in Iran, as it has a huge demand for energy from this Persian Gulf nation. Except for being in line with Washington over politics with these countries, Tokyo's interest in Middle Eastern countries rests on the requirement of energy. Therefore, Japan has an economic dependency on Iran and cannot afford to enter into a standoff with countries rich in energy. Furthermore, in recent years, Japan has been seeking to be a great power in politics, over and above exercising significant economic influence. Japan shows a proclivity to participate in not only East Asian, but also international affairs such as mediating US-Iran tensions. This shows that Tokyo intends to augment its international standing and make its voice heard globally. It is a challenge for Japan to balance its political and economic interests as it needs to be politically consistent with the US while satisfying its energy demand. The Trump administration has heightened tensions with Iran by imposing economic sanctions. Besides the nuclear issue, other reasons, for instance the Islamic Republic's style of governance, also contributed to Washington-Tehran dispute. However, Trump said on May 27 that Washington is not looking for a "regime change" in Tehran.With escalating US-Iran tensions, Abe's visit can further cement Japan's alliance with the US and deepen ties with Iran. By taking advantage of its relations with Tehran, Abe can play a role in mediating their tensions. He would convey Washington's views to Tehran. However, it remains to be seen how good a mediator can Japan be. The author is director of the Institute of Japanese Studies at the Chinese Academy of Social Sciences.opinion@globaltimes.com.cn