OPINIONS Can US and China learn from each other?

Can US and China learn from each other? 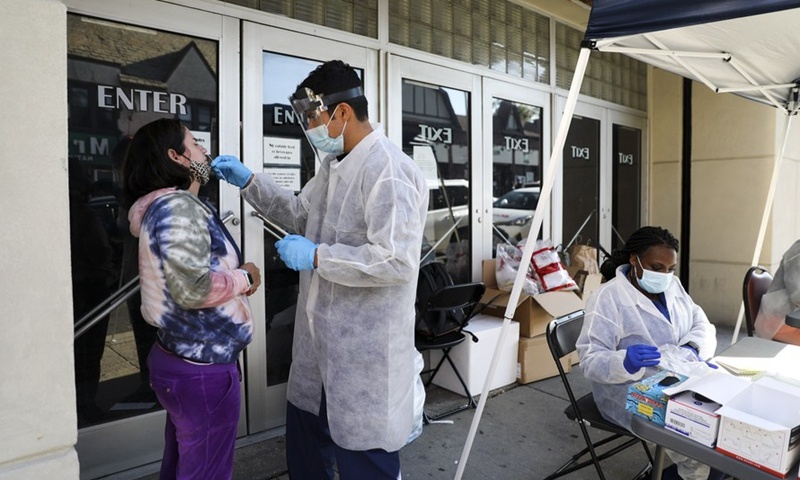 A woman gets COVID-19 test at a makeshift test site in Kew Gardens, one of the COVID-19 hotspot areas in New York City, the United States, Oct. 6, 2020. (Photo: Xinhua)

The US looks "totally messed up", but it may still be "functioning normally". It is a sample of how resilient a country can be to "turbulence".

Of course, few countries in the world dare to play like the US. Chances are, half way through the process, or even less, the country is in a mess and out of control. And whether the US will be able to maintain normal function while being in a mess this time makes many Americans feel not so sure. Many Americans are beginning to really worry that the political divide in the US is no longer an electoral game. It has gone too far and "turned the fake into the real." There are also fears that even if the US can pull through this time, political division will increasingly look like an "irreversible terminal disease" of the US liberal system. This election may not be the end.

The US system clearly has its moments, or it would not have emerged as the superpower that has led the world in so many ways. But the once mighty US system went too far, and the result is the rotten system it has today. Among other things, 230,000 people have died of COVID-19 in the US so far. This is the ulcer and shame of the US system that history can never forgive.

COVID-19 gives the Chinese system a rare opportunity to prove its strength and legitimacy. This remarkable achievement, superimposed against the backdrop of China's rapid development over the past few decades, is compelling. Now some elites in the US are turning the game between China and the US into a political confrontation. I hope this is not a process in which both sides are forced by this confrontation into two different extremes, forcing both sides to lose their sense of degree in order to fight.

History tells us that some mutual learning and reference are often achieved through confrontation. I hope this dialectical relationship will play a subtle role in the game between China and the US.  In the end, from a larger historical perspective, China and the US have unconsciously absorbed some of each other's strengths in various aspects, rather than just decoupling and become two separate systems like Earth and Mars.

If the results are good, both China and the US  will be more constructive. China's social tolerance will be improved. The US on the other hand, will restrain the erosion of the interests of the people by reducing the vicious fights between political parties. This may be a possible way of "win-win".