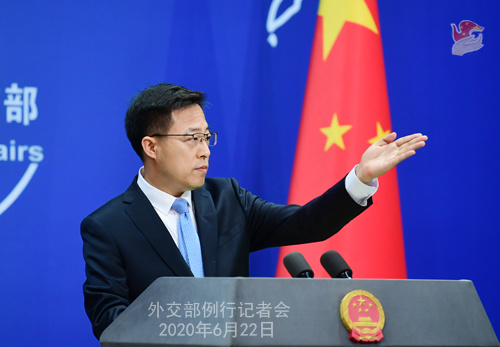 "Recent erroneous remarks by the Canadian side have clearly shown that Canada is practicing double standards on so-called issues of judicial independence," Zhao told reporters at a regular media briefing in Beijing.

Zhao made the remarks after Canadian Prime Minister Justin Trudeau said on Friday that he was "disappointed" and called on China to end what he called the "arbitrary detention" of Michael Kovrig and Michael Spavor. Both of them were detained in 2018 on "suspicion of engaging in activities that endanger national security" and were formally charged on Friday with spying by Chinese prosecutors.

"There is no such thing as arbitrary detention in China," Zhao said, adding that Chinese judicial organs are handling the cases independently and protecting the two Canadians' legitimate rights in accordance with the law.

China urged the Canadian leadership to respect the rule of law and China's judicial sovereignty, he added.

The spokesman stressed that anyone without bias would agree that the case of Meng Wanzhou, chief financial officer of Huawei, is a serious political incident.

The motive of the United States is to oppress China's high-tech companies like Huawei, and Canada has been acting as an accomplice in this case, Zhao said.

"We strongly urge the Canadian side to correct their mistakes and immediately release Meng and ensure her safe return to China," he added.

When asked about China's response if Huawei was banned from Canada's 5G network construction, Zhao said that China's position on the issue of 5G technology remains clear and consistent.

"The Chinese government asks Chinese companies to observe international rules as well as local laws and regulations when doing business overseas," he said. "We also hope that related countries could provide a fair, just and nondiscriminatory business environment."