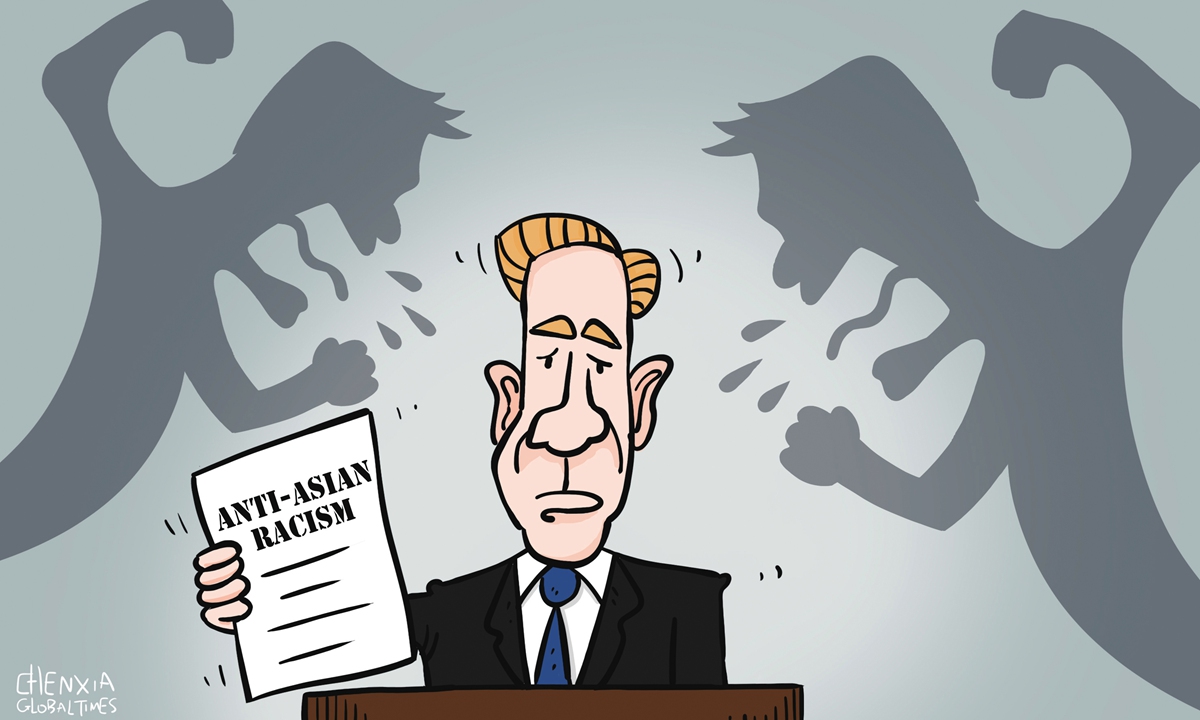 This past June, a survey by the Angus Reid Institute found that more than half of Asian Canadians had personally experienced anti-Asian racism in the past year.

And while anti-Asian racism has been criticized by some Canadian politicians and influencers, it turns out that when it comes to combatting anti-Asian racism, there is often much less appetite to do much about it.

Recently, Canadian Senator Yuen Pau Woo shared on social media a column in the Toronto Star newspaper, which paraphrased Chas Freeman, a retired US diplomat, in saying that, "the United States, assisted by Canada, took (Huawei CFO) Meng (Wanzhou) hostage in the first place as part of its trade-and-technology war with China."

Such a statement, while perhaps uncomfortable for many Canadians to acknowledge the Meng Wanzhou arrest as being purely political in nature, is certainly a reasonable view to hold.

In fact, no less than former Canadian foreign minister and deputy prime minister John Manley argued that the Meng case was clearly one of a political nature.

Donald Trump's comments at the time of Meng's arrest had, "given Ms. Meng's lawyers quite a good reason to go the court and say 'This is not an extradition matter. This is actually leverage in a trade dispute and it's got nothing to do with Canada,'" Manley remarked shortly after Meng's arrest.

But when Senator Woo pointed out the same truth, by sharing the article from the Toronto Star on Twitter, he faced a barrage of anti-Asian racism as a result.

Multiple respondents suggested that Senator Woo must be a Chinese spy.

"Where does their allegiance lie?", one respondent asked rhetorically. Another asked "Where do your loyalties lie, Senator?"

And scandalously, Chris Alexander, a former diplomat in the Stephen Harper government, posted on Twitter that "mouthpieces for foreign propaganda" like Woo should resign from the Senate.

While the political motivations of Meng Wanzhou's arrest - driven by the US agenda to combat China's ascendant technology industry - are abundantly clear, what is particularly egregious was not only the denial of this verifiable fact, but the knee-jerk anti-Asian racism that inevitably followed when Senator Woo dared to point out the uncomfortable truth.

Unfortunately, this recent string of racism on social media was not the first time Senator Woo faced anti-Asian racism for speaking out in a nuanced way about China.

This past June, Senator Leo Housakos introduced a motion which sought to condemn China for the alleged discrimination against the Uyghurs in Xinjiang. Fortunately, and despite widespread anti-China misinformation in the news media on the topic, Leo's motion was defeated with 33 Senators opposing the measure, with 29 voting in favor.

While there was some criticism voiced by anti-China activists against the 33 Senators who voted down the motion, according to a recent report by Global News, it was only Senator Woo who faced hateful rhetoric and racist messaging.

"While they all faced criticisms from some quarters, only one - Sen. Yuen Pau Woo, leader of the Independent Senators Group - seems to have been singled out as an alleged stooge… told to resign and 'go home,'" according to the Global News report.

The attacks on Senator Woo are significant for more reasons than just about the anti-Asian racism, troubling as those incidents were. In fact, what the voices of condemnation against Senator Woo, namely from Chris Alexander, are based on the illogical premise that one cannot be a proud Canadian and yet be opposed to steps which would cause a rift in relations between Canada and China. Indeed, it should be clear that, regardless of one's ethnic origins, the spread of anti-China propaganda serves no productive purpose.

Fortunately, while the voices of online trolls - even those with influential platforms - may be troublesome, the facts remain that Canada and China could be moving closer together, regardless of those who would seek to disrupt the trend.

According to a recent Op-Ed in the Business In Vancouver news journal by China's ambassador to Canada, Cong Peiwu, trade between China and Canada grew by 19.9 percent from early 2020 to early 2021. Canada's imports from China, and its exports to China, had both grown by double digits in just one year.

As Ambassador Cong wrote, "I believe mutual respect at every level will ensure mutual benefit and win-win outcomes." Indeed, despite the voices trying to disrupt a closer relationship between China and Canada, it seems that the majority of Canadians see the benefit in a closer relationship, and the harm that anti-China propaganda serves to Canadians.

The author is an expert in international branding strategy, with a particular area of interest in China's image in the Western world. He holds a Bachelor of Journalism degree.