Capital's curve can be shortened with its resolute, decisive actions: China Daily editorial 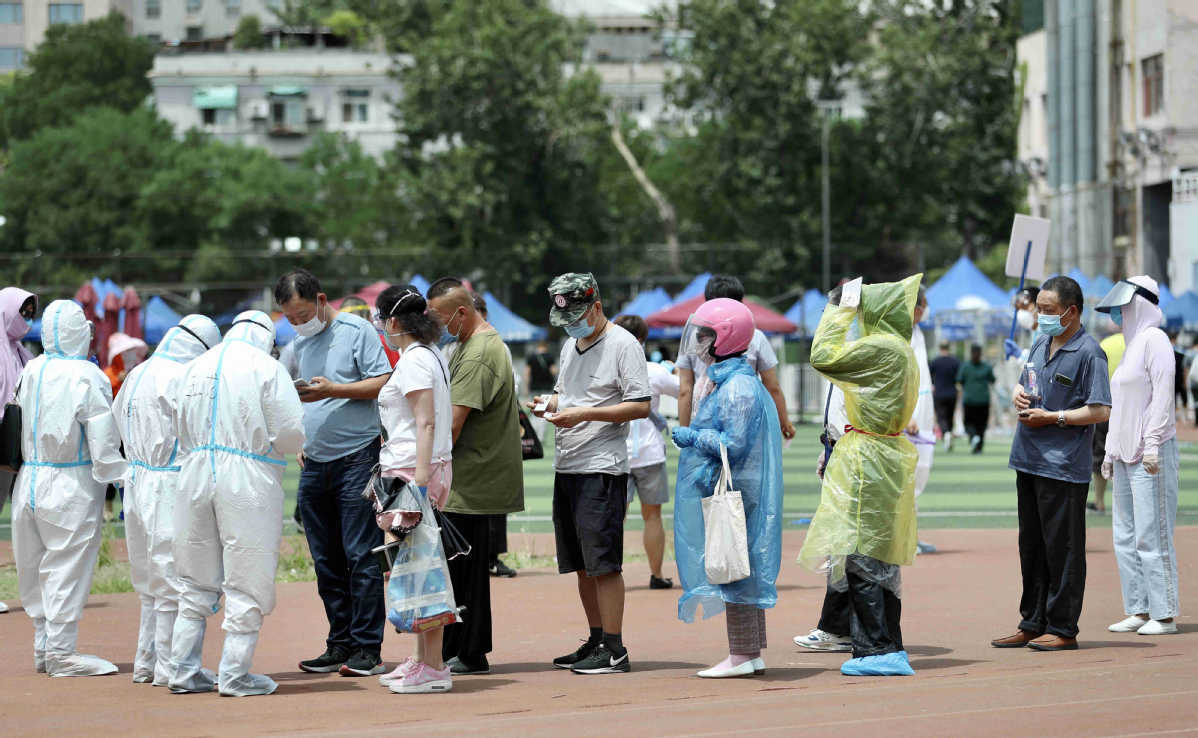 People line up for nucleic acid testing on June 15, 2020 at Guang'an Gymnasium in Xicheng District, Beijing. [Photo by Zou Hong/chinadaily.com.cn]

Just when residents had begun to anticipate life in Beijing returning to normal, a cluster of novel coronavirus infections has emerged to once again put the city on a war footing.

That 79 people have been confirmed infected with the virus in the city from Thursday to Sunday, which had not seen any local cases for 56 days before that, shows warnings of the possibility of a second wave need to be heeded and vigilance maintained.

Which is why the city has reinstated the tough transmission control measures that had been eased just a few days ago. With all of the new infections linked to the huge Xinfadi food market in the city's Fengtai district, it is hoped that the latest outbreak has been caught at an early stage, and that with lessons learned an epidemic can be prevented.

On the weekend, not only was the market and adjacent 11 neighborhoods locked down, but also 29,386 people that had visited the market over the past 14 days, and 39,497 residents living in the 11 residential communities were given nucleic acid tests. As of Sunday midnight nearly 40 percent of the test results were known, with none of them positive.

By Monday noon, nearly 200,000 people known to have visited the market over the past 14 days had been located in the city, and were under home quarantine, waiting to be tested.

Although the remaining test results are still to be disclosed, and the number of infections is likely to increase for a while, the available statistics and the information so far, suggest that this outbreak can be controlled.

But only if other local governments demonstrate similar responsiveness, because even if most of the people infected with the virus in this outbreak have now been identified and put under proper medical observation, there might still be a few who have not yet been identified or have already left the city. For instance, two infections related to the market were confirmed in Liaoning province on the weekend.

As such, no time can be lost in finding all the possible links in the transmission chain. The Beijing authorities and those elsewhere must carry out tracing, quarantine and treatment as quickly as possible with the utmost diligence.

That is why the capital has mobilized community-level civil servants to quickly screen residents in the city and why other local governments should do the same.

With the help of big data collected from the transportation departments, hospitals and the personal health status tracing apps that almost all smartphone users in the country installed over the past few months, it should now be possible to find the needles that would otherwise be hidden in the haystack.

While these efforts are underway, the outbreak in the capital indicates some loopholes in the prevention and control work need to be plugged.

Genetic sequencing tests of virus samples taken from the market indicate the strain of the virus is the same as that in Europe. Which should raise the vigilance of all quarantine and inspection departments to make it compulsory to check whether imported frozen foods are contaminated with the virus.

The risk of a second wave is very high, and resolute and decisive measures and continued vigilance are needed to prevent that happening.