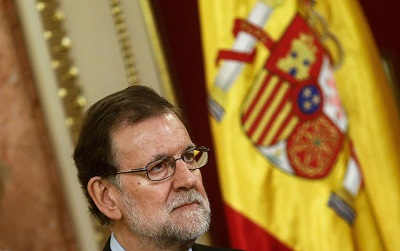 After a crisis cabinet meeting Saturday, Spanish Prime Minister Manuel Rajoy announced that Madrid would suspend Catalonia's political autonomy, fire Catalan President Carles Puigdemont and call elections in the region within six months. Puigdemont later claimed he will never accept Madrid's plan, and called it a "coup."
About 450,000 people took to the streets of Barcelona on Saturday against Madrid's move. Regional leaders who support independence blamed Madrid for suspending democracy, freedom and human rights. The Spanish Attorney General José Manuel Maza said that if independence is declared, the Spanish prosecutor would file a lawsuit for "rebellion" against Puigdemont.
The crisis is becoming increasingly intense. It seems that no political and legal measures in Spain or the EU could resolve the puzzle. The West's extravagant explanation over democracy, freedom and human rights over a long period of time is the fundamental reason this time, which provides the Catalan separatist movement a moral high ground it's not supposed to have. Leaders requiring "democracy" in Catalonia are more confident on the strength of their righteousness than those in the Spanish government who are preparing to file a lawsuit against them.
There have been signs of the emergence of separatism in the West, but in prosperous old days, sufficient bread and butter helped dissolve the problem. However, the situation has changed. The Catalan independence movement is revealing a real danger.
Apparently, Spain is running out of measures to quell the crisis. All it has left is resolving it the hard way. But firing and prosecuting an elected leader because he wants independence and exercises his rights over democracy and freedom seems like a slap on the face of Europe.
A state is still an effective and basic unit for human society and in maintaining world order. But during the decades after the Cold War, the West had destroyed some countries it does not like, supported almost every single anti-government activity in those nations and backed most of the separatist movements there, making people believe that democracy is above everything. Yet what happened in Catalonia may be a turning point.
Over the past few years, the UK has divorced from the EU, and the refugee crisis and terrorism have shocked Europe. Now that the Catalan independence movement has become an institutional challenge, all these events are probably not isolated from each other. They all indicate that governance in Europe is hard to sustain.
How to deal with Puigdemont and his comrades-in-arms will have a far reaching influence. Leaving them alone would mean turning a blind eye to separatism. Suppressing them, on the other hand, would mean a part of Europe's values system crashing.
The Catalan independence movement sets off alarm bells for Europe to adjust. Europeans are addicted to their previous glory. But the continent is now facing various challenges. It's time for them to wake up.