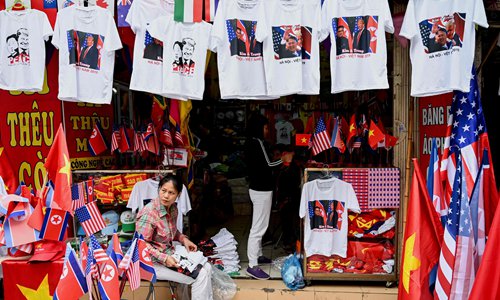 A vendor waits for customers while displaying T-shirts with pictures of US President Donald Trump and North Korea's leader Kim Jong-un in Hanoi on February 27, 2019, ahead of the second US-North Korea summit. (Photo: VCG)

As UN sanctions on North Korea remain in place, Chinese enterprises need to temper their enthusiasm for potential business opportunities in the virgin land to avoid becoming a target of US attacks.After the summit between US President Donald Trump and North Korean leader Kim Jong-un failed to reach a deal in Hanoi, Vietnam last month, media reports said Tuesday that UN experts are investigating possible violations of sanctions on North Korea in about 20 countries. The possible violations range from alleged nuclear procurement in China to military cooperation with Iran. It is unclear whether the moves are indirectly related to Washington attitude toward Pyongyang. Since the US and North Korea failed to reach an agreement in Hanoi, sanctions are unlikely to be lifted soon. It will be a long and painful process to ease sanctions on North Korea, and Chinese enterprises need to be prepared for this.Washington will probably maintain maximum pressure on North Korea, and seek to exert its influence on the UN to ensure a stricter enforcement of the sanctions. What's more, the US may take unilateral action to punish those who maintain economic interactions with North Korea they alleged illegal. Compared with companies from South Korea and Japan, Chinese enterprises may more easily become the targets of US actions.Chinese telecoms giant Huawei is in the middle of a tough battle with the US, which accuses the company of violating US sanctions against Iran and North Korea. The US may use sanctions on North Korea as an excuse to crack down on Chinese companies and prompt Beijing to make compromises during the ongoing trade talks with Washington. China has strictly implemented UN Security Council resolutions related to North Korea. But in China, many companies believe the denuclearization of the Korean Peninsula will soon lead to sanctions relief and an opening-up in the isolated country, so they are closely watching potential business opportunities in North Korea. They can continue preparing for sanctions relief but should be patient and strictly follow the UN sanctions on North Korea. China is willing to strengthen economic cooperation with North Korea but Chinese firms need to adopt a prudent attitude in case they are unfairly targeted by the US.