As predicted, among all the celebrations for the 70th anniversary of the founding of the People's Republic of China, it was the large-scale military parade in Beijing on Tuesday that grabbed the world's attention. To some, it would appear to be the only thing that Beijing did to celebrate that momentous historical event. They simply watched it through their own ideological prisms and saw it as proof of the rising military might and geopolitical ambition of a country different from their own. 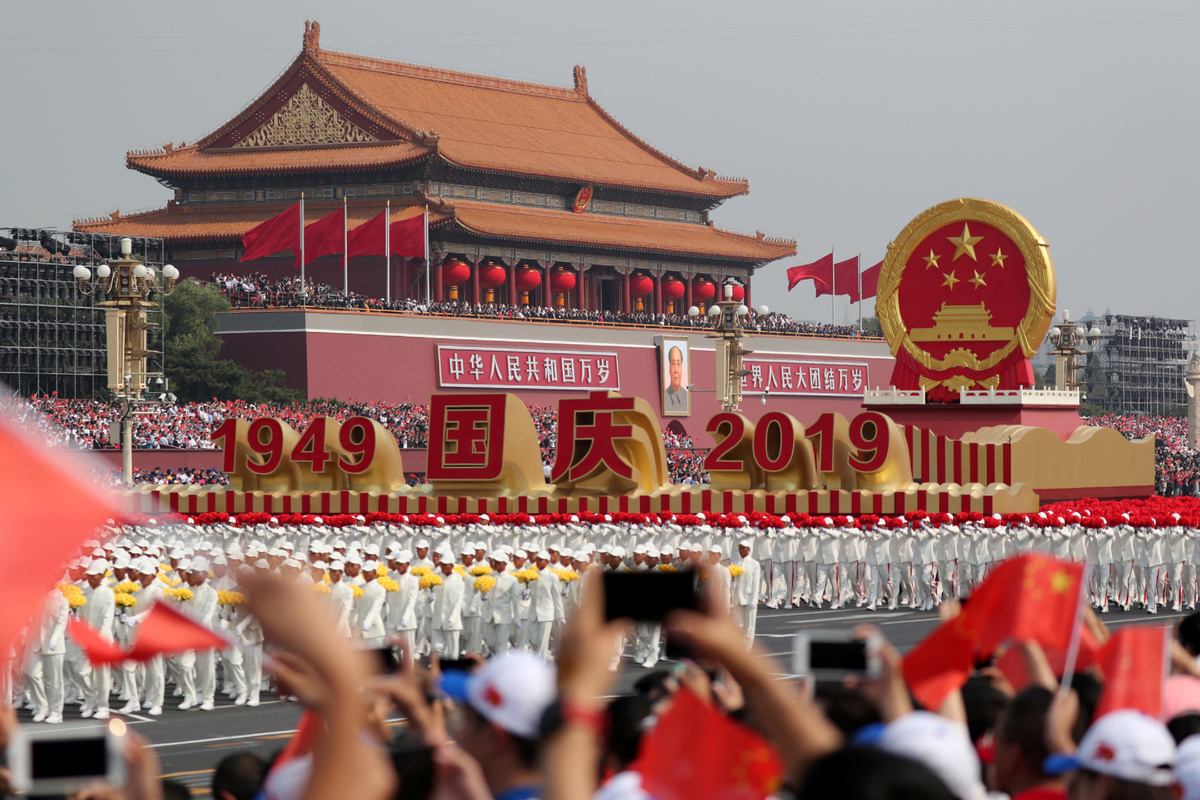 A float featuring China’s national emblem travels past Tian’anmen Gate during a parade marking the 70th anniversary of the founding of the People's Republic of China, on its National Day in Beijing, China October 1, 2019. (Photo: China Daily)

This was evident in the reports of Western media, which, ignoring the context, felt no qualms about using the occasion to hype up a "China threat" focusing on new weapons such as a "nuclear-capable missile designed to evade US defenses".

Yet viewed objectively, the grand ceremony in Tian'anmen Square actually provided the world with an opportunity to appreciate an entirely different picture and to hear a completely different message, as the country reflected on its past and looked forward to the future.

As President Xi Jinping said in his speech at the event, the founding of the PRC 70 years ago completely changed China's fate. The Chinese people stood up to put an end to their poverty and weakness.

The painful memories of the nation's humiliations at the hands of foreign powers and domestic turmoil over more than 100 years prior to the founding of the New China continues to fire the resolve of the Chinese people of all ethnic groups that such ignominy should never happen again. This purpose has not only spurred the hard work, vision and courage of the Chinese people throughout the 70-year history of the New China, but, more importantly, will continue to shape its future.

"No force can ever shake the status of China, or stop the Chinese people and nation from marching forward," Xi said.

But, although the country will not be cowed by threats or subdued by pressure, he assured the world that China remains committed to its path of peaceful development. While the nation will resolutely defend its hard-won independence and territorial integrity, the Chinese people cherish peace and will strive amicably to work with the people of other countries in pursuit not only of the nation's overdue rejuvenation but also a community with a shared future for all mankind.

Having suffered repeatedly from foreign bullying, the Chinese people have ingrained in their minds that invading, enslaving and colonizing other peoples, for whatever reasons and in whatever forms, are evil acts. And, despite the scaremongering of some about China's military parade, China remains committed to a new type of international relations based on equality and common prosperity. It does not pursue hegemony or seek expansion. It will never be subordinate to others, but neither will it coerce others into submission.

Having become a strong, comprehensive national power, it is in a better position than ever before to make greater contributions to humankind. Not only by shouldering more responsibility to help other developing countries improve their people's livelihoods. But also by actively exploring and applying a Chinese approach to upholding multilateralism, international peace and stability, and common development.

Over the past 70 years, China has integrated itself into the global community and made ever greater contributions to safeguarding world peace and boosting global prosperity through its development, and it will continue to do so.

It is the Chinese people's longing for better lives that has prompted the Communist Party of China to blaze the path of socialism with Chinese characteristics, through which the nation not only continues to pursue its rejuvenation, but also further contributes to the well-being of the world.

While those who bear ill-will toward China have chosen to focus on the military hardware in the parade and tried to portray it as having aggressive intentions, Xi, also chairman of the Central Military Commission, reminded those watching that the nature, purpose and character of the People's Liberation Army and People's Armed Police Force is to resolutely safeguard China's sovereignty, security and development interests, and firmly uphold world peace.

What the event displayed is not aggressive intentions, but the pride China takes in its accomplishments and its awareness that unity is strength.

By coming together at this moment, wherever they might be, the Chinese people were able to reflect on what has been achieved over the past 70 years and look forward to the bright future of national rejuvenation.