Changing forms of greetings signify the changes in Chinese society 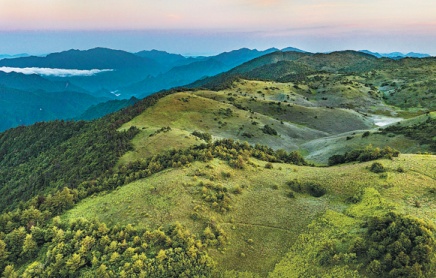 Forests have recovered on the mountains in Chengkou county, Chongqing. TAO MING/XINHUA

Editor's Note: China has made great efforts to better protect its environment. What are the achievements and challenges? In the first of a series of commentaries, a senior journalist of China Daily tries to find the answers.

Since my childhood, I have been greeting people not with "Hello" but with "Chi guo le?", which in English means "Have you eaten?" My elders had been greeting each other that way for generations.

When I started learning English about 50 years ago, I was taught that the English people greeted each other thus: "Nice weather, isn't it?" I thought it funny but did not bother to find out why.

In recent years, however, I have noticed that fewer and fewer Chinese people use the traditional chi guo le? as a form greeting. They seem to have copied the English greeting－"nice weather, isn't it?"－or just "hello".

Some years ago, when I greeted a friend by praising a rare blue sky in Beijing, I suddenly realized that unintentionally, people in different countries may ask the question they are most concerned about while greeting each other.

Facing starvation for centuries, the Chinese people were worried more about food than anything else, and that's why they greeted each other with chi guo le? Blanketed by fog and frequent rain for most of the year, the English people naturally congratulate each other for a nice weather. So when the Chinese people no longer have to worry about the next meal－and instead are more concerned about smog－they have started using the English form of greeting. After suffering environmental degradation for the several decades, the Chinese people long to see blue skies, green mountains, free-flowing rivers, and feel the fresh air.

During the Han (202 BC-220 AD) and Tang (618-907) dynasties, China's capital－present-day Xi'an－is said to have a population of about 1 million. But for all the prosperity and power the two dynasties enjoyed, they had to look east to shift the capital toward the end of the reigns. There might have been other reasons for shifting the capital but environmental degradation, according to historians and archeologists, was very important among them.

Beijing, the national capital today, has a population of more than 20 million. For decades, it has been suffering from water shortage and air pollution. Scientists and environmentalists, for some years now, have been discussing whether or not the capital should be relocated. But there is hardly any ideal place to shift the capital, as pollution is widespread and water shortage is a big problem in most parts of China.

Some measures have been taken, such as building satellite cities and sub-centers to ease the ecological and environmental impact on Beijing, but the best solution, according to the central government, is to coordinate economic development with environmental protection to make the capital and the country economically prosperous and ecologically beautiful.

The goal is to improve the environment while maintaining healthy economic growth. To improve the air quality in the Beijing-Tianjin area, a lot of factories producing cement, iron and steel and glass, and power plants in Hebei province have to be dismantled or destroyed. In the past, the implementation of policies to reduce the number of polluting industries rendered millions of people jobless, but the unemployed were either compensated or absorbed into other sectors.

In some key areas along the Yangtze River, the strictest 10-year fishing ban that will come into force next year will leave 100,000 fishing boats idle and as many as 300,000 fishermen jobless. But the central government has allocated billions of yuan to compensate the fishermen while the local governments are leaving no stone unturned to create new jobs for those who have lost employment.

After years of country-wide efforts, China's ecological situation has been changing for the better, as the results of different surveys show. No wonder Beijing residents have been seeing a lot more blue skies as compared with, say, eight years ago. But it is too early to celebrate and we should be clear-minded that the situation is far from stable. If we miss the present critical window to improve the environment, we will regret endangering our future, and the future of the next generations.

Someday, when blue skies and good weather become the norm in Beijing, I hope I can stop saying "Nice weather, isn't it?" to greet people just as I have stopped saying chi guo le?