Child labor, a sore spot in US' human rights record 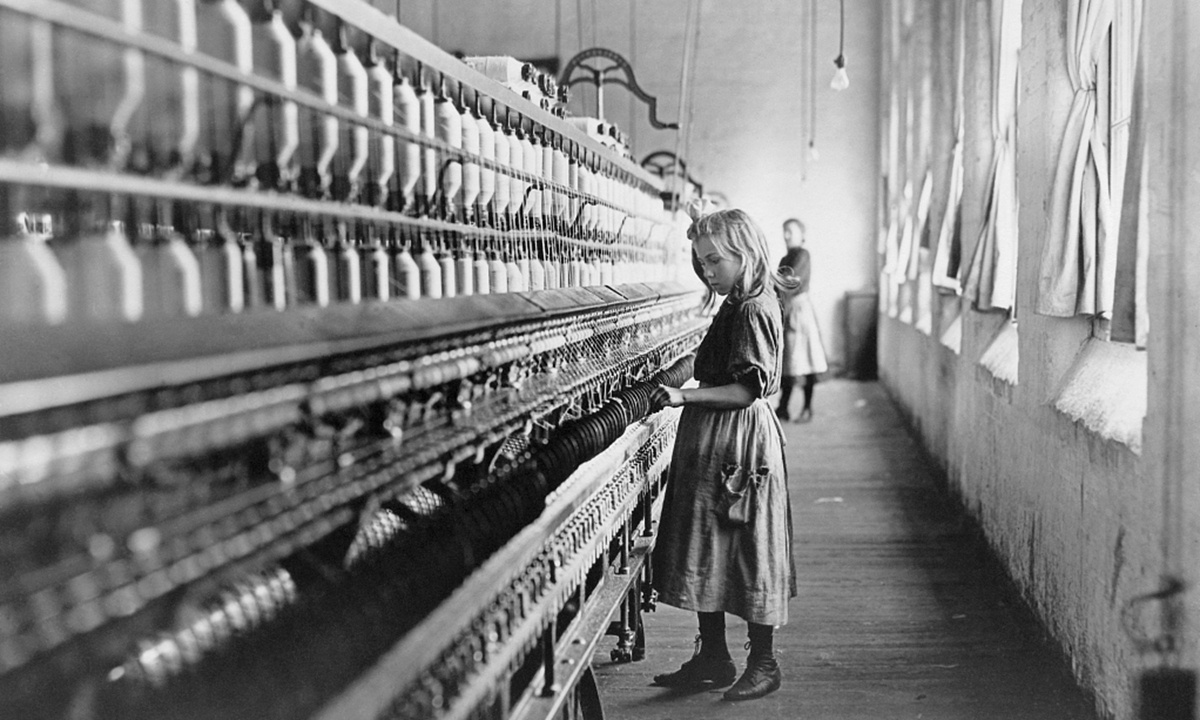 On May 30, US President Joe Biden said at a Memorial Day ceremony in Delaware, "We could do nothing but speak out for human rights around the world because that's who we are."

Not long ago at the US-China High-Level Strategic Dialogue in Anchorage, Biden's National Security Adviser Jake Sullivan also boasted, "A confident country is able to look hard at its own shortcomings."

Should the US be truly confident and introspective, they are supposed to look hard into their own labor problems, in particular their "dark history" of child labor, with the World Day Against Child Labor (June 12) approaching.

The US brands its core values as "democracy," "liberty," and "human rights," stressing their focus on child development and portraying the US children as the happiest and most carefree world over. However, what is less known is that the US is the only country in the world that has not ratified the UN Convention on the Rights of the Child (UNCRC). Abusing child labor has been a long-standing labor rights issue in that country.

The International Labor Organization (ILO) has been expressing concerns over the US' child labor problem for years and repeatedly urged the US government to take measures to address this issue. However, the US has done nothing to address it. Using child labor is not only a proof of the US' gross violation of labor rights, but also proof of its double standards on human rights.

Child labor in the US could be traced as far back to its slavery system. During the American Civil War, when the North and the South were fighting bitterly over slavery, child labor was already widely used in the North, as children could be badly paid and were much easier to control. At that time, young children were often used to replace adults to operate machines and often worked up to 10 to 12 hours a day.

Even years after the end of slavery, child labor continued to exist in the North and replaced many slaves. Sometimes poor children were even taken away from their parents and sent to work in rich families. Capitalists only needed a labor force, no matter black or white, old or young, so long as their own children were not involved.

To cite just one example, factories in the US widely employed children to sweep chimneys, because they were tiny enough to work in the narrow channels. But there was neither health nor safety protection for these children cleaning the thick, hot dust in the narrow chimneys. Usually they had to work until the age of 16, when they could no longer fit in the chimneys and had to turn to other drudgery.

It was documented that an eight-year-old child was forced to clean a barely extinguished chimney in a brewery, but tragically this poor little child was stuck in the chimney and wasn't found until scorched.

It was not until president Franklin Roosevelt signed the Fair Labor Standards Act in 1938 that the century-long abuse of child labor in the US was restricted.

The US likes to credit its success to its strong sense of responsibility, independent entrepreneurship and respect for scientific innovation. However, it can neither conceal its dark history of using child labor, nor can it hide the truth that child labor is still widely used.

The tobacco industry in the US is still employing children under 16 to work on high-risk tasks. In 2014, a non-governmental organization pointed out that American tobacco farms hired a large number of children aged 14 and under to harvest tobacco, dry tobacco leaves, and even operate heavy machinery.

Standing at the bottom of the industrial chain with low profit margin, the tobacco farms hire children and exploit their surplus value, which has become routine.

However, the harm caused by tobacco farming to children's health is irreversible. It was reported that children working in tobacco farms generally have nausea and headaches, showed symptoms of nicotine intoxication, and some were diagnosed with lung infections. A few American congressmen proposed a bill to prohibit minors under 18 from engaging in work on tobacco. Several years have passed, but the bill has not even entered the voting stage.

American labor law, however, stipulates that with the permission of their parents, children at the age of 12 and above can engage in work at farms, with no time limit. If they work on their family farms, there is even no age limit at all.

The child labor problem in the American agriculture industry is more appalling. According to some reports, approximately half a million children in the US engage in some sort of agricultural work. It is not uncommon for these children to start working at the age of 8, and work 72 hours a week, amounting to over 10 hours a day. The risk for child laborers to get cancer caused by pesticides is three times that of adults.

According to official US statistics, in 2019 alone, 858 child labor cases were identified in violation of the Fair Labor Standards Act, and 544 minors were found working in hazardous places. 5.5 percent of child labor worked on farms, and half of child labor deaths came from the agriculture sector. From 2003 to 2016, 237 children died in agricultural accidents.

The child labor problem is like an abscess in the human rights record of the US, reminding the world of the hidden shadow of the so-called "democracy beacon," and its double standards approach on human rights.

The World Day Against Child Labor is coming up. Should the US have the confidence to look hard at its own shortcomings, it's time for them to show regrets to the scorched child, as well as to children of all ages and ethnic groups that have been exploited.