By He Dan | People's Daily app

Climate change is a pressing issue of international concern, and a tough problem of our times impacting future development.

On May 6, during a phone conversation with UN Secretary-General Antonio Guterres, President Xi Jinping mentioned China’s emission reduction goals for tackling climate change and emphasized that “China has taken the initiative to do that, instead of doing it passively.” In addition, providing assistance to developing countries “is China’s consistent practice, as well as its moral responsibility.”

On May 26, Xi sent a congratulatory letter to the World Judicial Conference on Environment, and said that “the earth is the common home of humanity,” and we should “build a beautiful home for humans and nature coexisting harmoniously.”

Xi also emphasized on several occasions that addressing climate change is a common cause for mankind. China has never been absent for meeting the serious challenge of climate change.

On January 18, 2017, Xi declared solemnly at the UN headquarters in Geneva, “China will continue to take steps to tackle climate change and fully honor its obligations.” Such remarks contribute to consolidating and promoting the multilateral process on global governance of climate change when the process meets with difficulty. 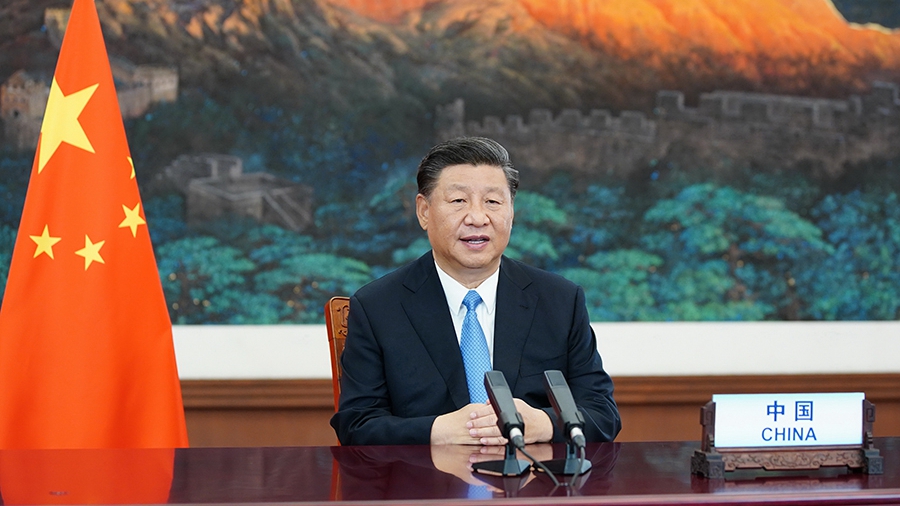 President Xi Jinping addresses the general debate of the 75th session of the United Nations General Assembly via video on September 22, 2020. (Photo: Xinhua)

In September 2020, Xi put forward its carbon goals while addressing the general debate of the 75th session of the UN General Assembly. “China will scale up its intended nationally determined contributions by adopting more vigorous policies and measures. We aim to have CO2 emissions peak before 2030 and achieve carbon neutrality before 2060.” This means that China will use a much shorter time span than many developed countries to move from peak carbon to carbon neutrality.

The carbon goals concern the sustainable development of the Chinese nation and building a community with a shared future for mankind. It is China’s solemn promise to address climate change and promote global ecological conservation, and enhance morale for the international community.

This fully shows China’s role as a responsible major country, and highlights China’s due contribution to promoting global environmental conservation.