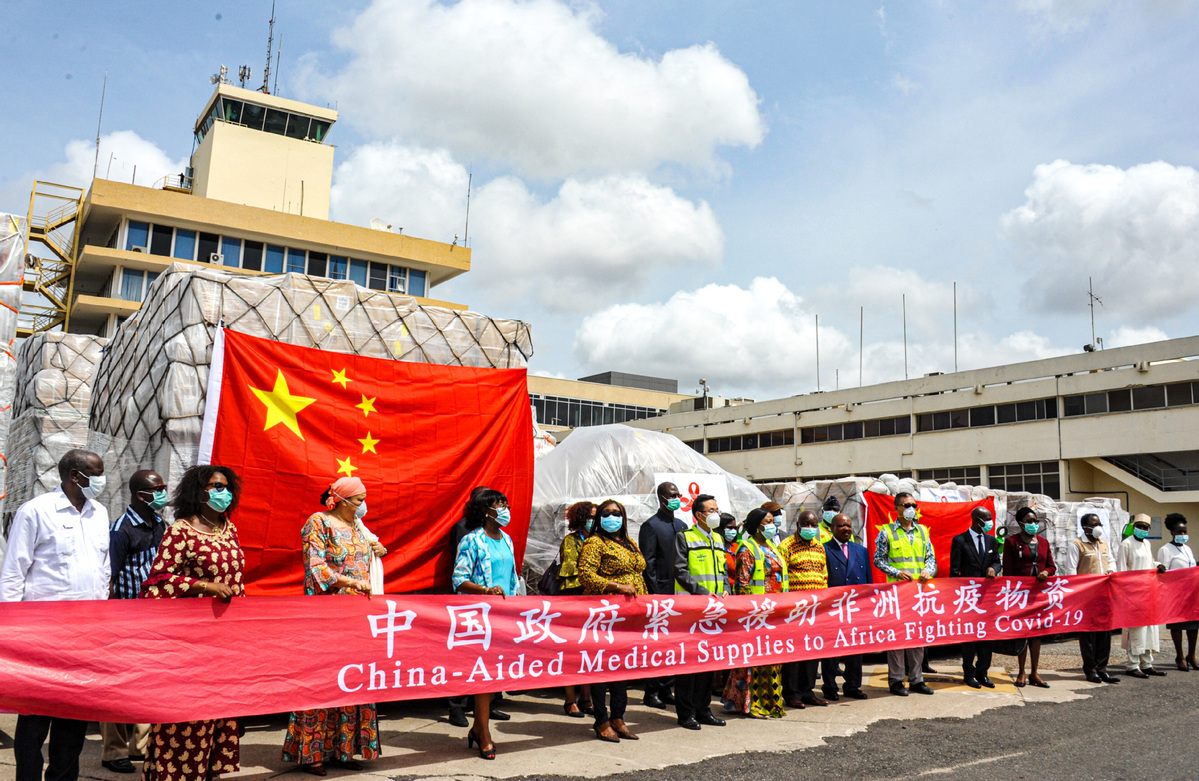 A welcome ceremony is held at the Kotoka International Airport in Accra, Ghana, as medical equipment donated by China arrives in Ghana, on April 6, 2020. [Photo/Xinhua]

Before painting a grim picture of the global economy — that it would contract by 3 percent this year — the International Monetary Fund had said Africa's growth potential for 2020 is high if it is not affected by the novel coronavirus pandemic.

African countries such as Ethiopia and Rwanda that are not dependent on natural resources alone for economic development and have relatively high economic diversity and good institutional environments have become the main drivers of Africa's development. Also, the African Continental Free Trade Area has been facilitating the development of Africa's sub-regions to realize the continent's overall development potential. And although the East African community has been the fastest growing and most integrated sub-region, most member countries of the Economic Community of West African States are developing at a fast pace.

China and African countries enjoy win-win trade relations thanks to their shared goal for common development. Based on the principle of equality, mutual benefit, mutual respect and non-interference in each other's internal affairs, China and Africa managed to raise their trade volume to more than $200 billion in 2019.

African countries are eager to modernize their industrial and agricultural sectors to achieve economic independence and sustainable development, while China has rich experience in agricultural and industrial development and is undergoing economic restructuring as part of deepening reform. Which means the two sides' complementary advantages can help them further expand their already mutually beneficiary economic partnership.

In the global fight against the pandemic, China has shown its commitment to building a community of shared health for humankind and a China-Africa community with a shared future. It has also taken effective measures and urged the international community to help African countries prevent and control of the virus.

On May 18, in his address to the 73rd annual session of the World Health Assembly, the World Health Organization's decision-making body, President Xi Jinping said, “we must provide greater support for Africa” .

The US and China are the two largest economies in the world, yet they have different political systems and development principles. The US, for instance, seeks to promote Western-style democracy in Africa, which is in contrast to China's principle of respecting African countries independent choice of economic development model and political system.

Worried that China's cooperation with African countries in infrastructure construction could prevent the US from consolidating its presence on the continent, the White House has alleged that the China-proposed Belt and Road Initiative poses a threat to US national security and is a means to promote “neocolonialism” and trap African countries in debt. In fact, to counter the Belt and Road Initiative, the US has proposed “Prosper Africa”, ostensibly to help US enterprises obtain raw materials from Africa and expand their presence on the continent and offset China's influence.

Meanwhile, to control the rapid spread of the novel coronavirus across the continent, many African countries have imposed strict measures and restricted the movement of people. But since more than half of Africa's population relies on the informal industry to make a living, these measures have affected many people's livelihoods. Taking advantage of the situation, some Western media outlets have blamed China for the outbreak and stigmatized Chinese cooperation projects in Africa, even urged some African states to attack China. They have even misinterpreted China's aid to African countries as “compensation” for exercising “further control” on Africa.

The Chinese and US economies have different advantages. In terms of trade, China is far ahead of the US in Africa, while the US has an advantage in investments in Africa — in fact, the two sides are less competitive, perhaps even complementary in some areas. For example, Chinese enterprises are experts in infrastructure construction, whereas US companies are leaders in technological equipment, operation and management. Also, Western countries, including the US, mainly invest in private enterprises and trade, and their assistance to African countries is more in areas such as medical care and education, while most of China's aid and investment are concentrated in infrastructure, manufacturing and other sectors.

But by helping African countries improve their infrastructure and information and communications technologies, Chinese funds and projects are playing a vital role in reducing the operating costs of US enterprises and improving and integrating the sub-regional markets in Africa, and thus creating more opportunities for US investors.

China and the US share the common goal of improving global economic rules and governance, and maintaining a good market order in Africa, as well as boosting demand and expanding trade in Africa. As such, they should work together for mutual benefit, not get entangled in confrontation.

The authors are researchers at the China Academy of Belt and Road Initiative, Beijing International Studies University. The views don't necessarily reflect those of China Daily.