During the Special ASEAN-China Foreign Ministers’ Meeting in Celebration of the 30th Anniversary of Dialogue Relations and the 6th Lancang-Mekong Cooperation Foreign Ministers’ Meeting, both held in southwest China’s Chongqing municipality from June 7 to 8, participants reached a general consensus on enhancing China-ASEAN cooperation and the Lancang-Mekong Cooperation, showing their wish to jointly create a brighter future through solidarity and deeper cooperation. 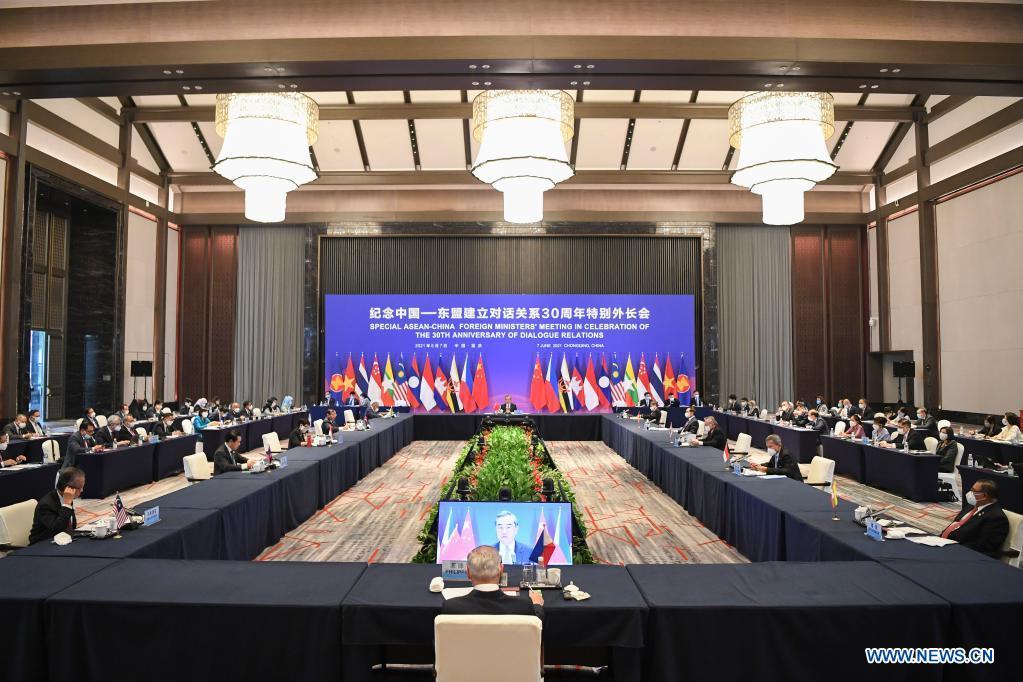 Over the past 30 years, China-ASEAN relations have developed by leaps and bounds. The two sides have become each other’s largest trading partner, most connotative cooperation partner and most dynamic strategic partner through their joint efforts.

In 2020, China and ASEAN became each other’s largest trading partner for the first time. Their two-way investment has continuously been expanded and balanced, and exceeded $200 billion accumulatively.

The signing of the Regional Comprehensive Economic Partnership (RCEP) signifies that Asia-Pacific nations are becoming a powerful force for safeguarding free trade and multilateralism and leading international cooperation.

It should also be noted that China and ASEAN countries have stayed united in the fight against the COVID-19 pandemic, vividly demonstrating close brotherhood and sound neighborly relations.

China and ASEAN have always prioritized bilateral relations with each other on their diplomatic agenda, which provides political guidance for the development of their ties.

Among ASEAN’s dialogue partners, China has become a number of “firsts”: the first to join the Treaty of Amity and Cooperation in Southeast Asia, the first to establish strategic partnership with ASEAN, the first to discuss with ASEAN to establish free trade zone, and the first to give unequivocal support for ASEAN centrality in East Asian regional cooperation, which have fully embodied China’s policy of good-neighborliness and friendship.

Chinese President Xi Jinping put forward the principle of amity, sincerity, mutual-benefit and inclusiveness for neighborhood diplomacy, and expressed a sincere wish to work with ASEAN countries for a 21st Century Maritime Silk Road and a closer China-ASEAN community with a shared future, giving momentum to the deepening of China-ASEAN relationship.

At the Special ASEAN-China Foreign Ministers’ Meeting in Celebration of the 30th Anniversary of Dialogue Relations, Chinese State Councilor and Foreign Minister Wang Yi pointed out that the two sides can discuss how to elevate their bilateral relations into comprehensive strategic partnership, showing willingness and determination to deepen solidarity and cooperation with ASEAN.

China-ASEAN cooperation is believed to embrace huge opportunities for continuous progress in the future.

At the opening ceremony of the 17th China-ASEAN Expo and China-ASEAN Business and Investment Summit held in November last year, Xi made four suggestions on cultivating a closer China-ASEAN community with a shared future.

The two sides should enhance strategic mutual trust and further synergize their development plans, elevate economic and trade cooperation and facilitate an early and full recovery of the regional economy, enhance innovation in science and technology and deepen cooperation on the digital economy, as well as strengthen cooperation against COVID-19 and enhance capacity building in public health, he said.

Xi’s suggestions were oriented to the needs of China and ASEAN for their respective development, showed an effective path for the two sides to upgrade cooperation, and drew a new blueprint for the development of the China-ASEAN strategic partnership.

At a new stage of development, China is promoting high-quality development and quickening its pace to build a new development pattern whereby domestic and foreign markets can boost each other, with the domestic market as the mainstay, which will bring other countries, including ASEAN countries, a bigger market, more opportunities, and stronger drivers for economic growth.

China’s Belt and Road Initiative (BRI) has been increasingly synergized with the Master Plan on ASEAN Connectivity 2025, and a good number of well-received key projects concerning people’s livelihood have been steadily implemented, generating tangible benefits for people in China and ASEAN countries.

At present, China and ASEAN are making efforts to put the RCEP into force as early as possible, which will certainly bring broader space for cooperation among countries involved.

It is the common aspiration of China and ASEAN to, with the 30th anniversary of the establishment of China-ASEAN dialogue relations as well as the fifth anniversary of the launch of Lancang-Mekong Cooperation as an opportunity, speed up high-quality construction of the Belt and Road, advance the sound development of regional cooperation, and safeguard regional peace and stability.

Looking into the future, China and ASEAN will jointly realize, maintain, and develop a road of regional cooperation with East Asian characteristics, build a higher level of China-ASEAN strategic partnership and a closer community with a shared future.