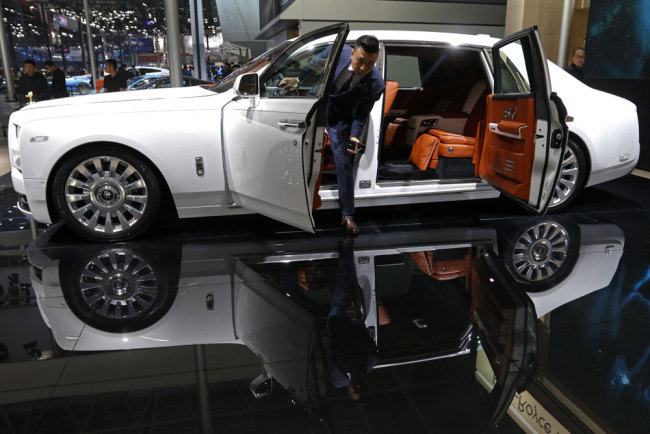 A staff member steps out from the Rolls Royce luxury car during the China Auto China in Beijing, Thursday, April 26, 2018. (Photo: Xinhua)

China has announced that it will reduce tariffs on imported automobiles from a current rate of 25% to 15% from July 1st.  Additionally, tariffs on imports of auto parts will also be reduced to 6% from the current range of 8% to 25%.  This has been lauded as a response to U.S. trade complaints.  But in reality this decision has been some time in coming, and does not represent a trade concession so much as an incremental opening of China's economy and a step by China's government to encourage continued consumption growth.

In early April at the Boao Forum for Asia, President Xi Jinping stated that "This year we will significantly lower import tariffs on motor vehicles and reduce import tariffs on some other products," and that "We will import more products that are competitive and needed by our people."  Regardless of demands by US negotiators to balance the trade deficit between China and the US, we are likely to see continued small steps by China to reduce restrictions on foreign imports as part of a longer-term strategy to drive domestic consumption.  This is not because China is caving to US demands for a balanced trade relationship.

The last few years have seen a massive shift in China's economy away from an overreliance on exports and investment towards a growth model that is based on consumer spending.  Last year, consumption accounted for between 58% and 59% of China's GDP.  In 2018 this number is on track to cross 60%.  For China, this transition to consumption-based growth is critical due to the uncertainty of export growth, the challenge of switching from basic manufacturing to more complex value-added manufacturing and because investment in infrastructure projects is no longer resulting in sustained economic growth.  As a result, we are seeing the government take steps to encourage consumer spending.  Some of these steps will include reductions in tariffs that will ultimately benefit China's trade partners.

The result of reduced tariffs within the auto sector will mean that foreign automakers like BMW and Tesla, which currently import a relatively higher proportion of the vehicles that they sell in China, will benefit.  This means luxury models will become slightly more affordable for Chinese consumers.  However, it is unlikely that this action will do much to change the plans of global automakers, or shift trade numbers between China and the US, as foreign auto makers have spent the last decade investing heavily in JV partnerships with Chinese firms to boost production in China.  This is order to bypass tariffs.  In fact, only around 4% of all vehicles sold in China are imported.  Additionally, as Chinese demand for cars grows, many automakers have also moved their design and development operations to China to better meet the needs of Chinese consumers.  An increasing number of new vehicles are also being developed specifically for production and sale in China.

From the perspective of foreign automakers, lower tariffs will be seen as a step forward.  However, the vast majority have already committed substantial resources to developing production capacity inside China, meaning a reduction of tariffs at this stage is unlikely to change automakers' long-term plans towards shifting production to China.  This makes a coming tariff reduction for cars imported into China an easy win for president Xi Jinping.  China is essentially doing what it had always planned to do.  From the outside, this may make it look as though China is being conciliatory towards the US in trade negotiations, even if this small reduction in tariffs will not really change the status quo for American companies or American job creation.  Meanwhile, president Trump and the rest of his negotiating team have failed to get on the same page in their negotiation strategies, failing to secure real long-term concessions that would balance trade or perhaps - more importantly - balance long-term competitiveness in key industries.

In the end, Chinese consumers win, as they gain access to a wider range of choices and better prices. China wins because it takes a small step towards opening its markets, and car companies get to sell more high-margin products.  However, the trade relationship between China and the US doesn't really change. China's approach to development has always been one of taking gradual steps towards a larger objective.  This is something the Trump administration could learn from, rather than chasing quick wins that appear good in the short-term, but do little to help over the long-run. With Chinese automakers also taking the lead in the development of next generation EV vehicles, it will also be interesting to see what the future holds for China's domestic auto industry, as it should be poised to benefit from both the lowering of tariffs on auto parts, which may make their product cheaper, as well as lower pricing hurdles enough to convince consumers to pay premium prices as well.