China, Botswana to usher in new era of common development

Botswana’s President Mokgweetsi Masisi is leading a delegation to China to attend the Beijing Summit of the Forum on China-Africa Cooperation (FOCAC) and pay a state visit to the country at the invitation of Chinese President Xi Jinping. 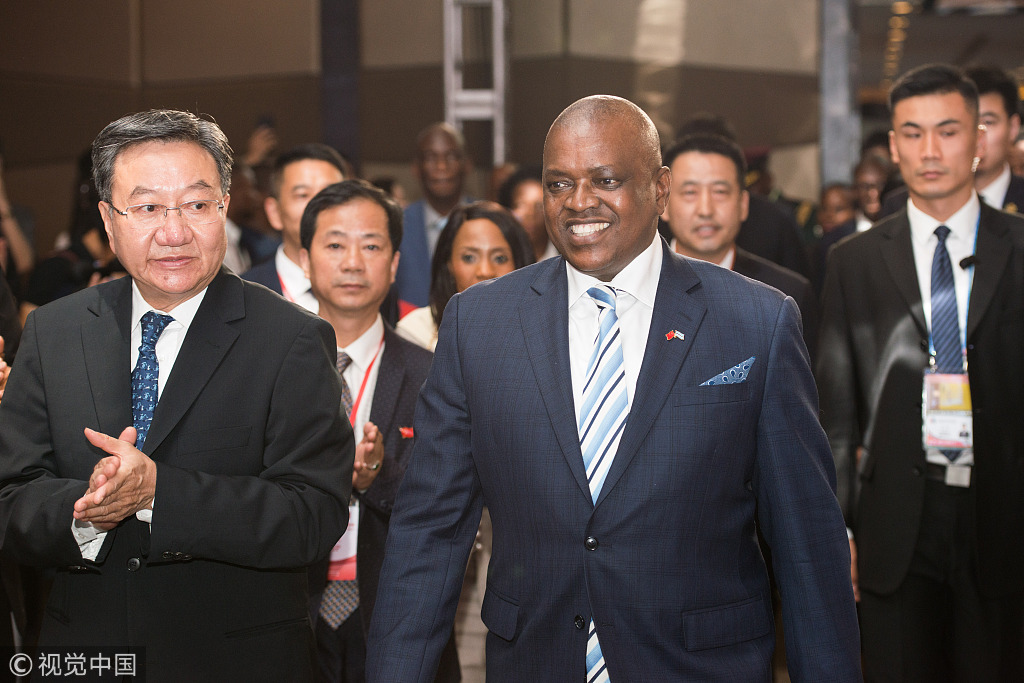 It is Masisi's first visit to China since he assumed office this April, and also the first trip to China by a Botswana’s President in 12 years.

The Botswana society is looking forward to this trip of their president, since it is of milestone significance to China-Botswana ties.

Botswana, an inland country in southern Africa, covers an area of 580,000 square kilometers. The country boasts rich mineral resources and excellent natural environment. Ranking the second in the world in production and sales of diamonds, the country is dubbed as the “nation of diamond”. Thanks to the favorable natural environment and the variety of wildlife, Botswana is a country with developed husbandry industries.

Since its independence in 1966, Botswana has maintained long-term and stable political, economic and social development. With a per capita GDP of around $7,600, Botswana is regarded as a “well-off” African country.

China and Botswana are sincere friends who share weal and woe with each other.

In the early days after Botswana’s independence, China supported Botswana’s fight against harassment from neighboring racist regimes and its efforts to safeguard national sovereignty and security.

In return, Botswana, before establishing diplomatic relations with China in 1975, backed on restoration of China's lawful seat in the United Nations despite of the pressure from the West.

Botswana has always followed the one-China policy. China and Botswana have conducted highly effective cooperation in regional and international affairs. China has offered assistance to Botswana’s economic and social development within its available resources, including the construction of railways, highways, and schools. In addition, China's medical-aid teams to Botswana have helped more than 2 million local patients.

China-Botswana friendship has been deeply rooted in the hearts of both peoples.

More and more Botswana citizens are learning Chinese language, and Confucius institutes in the country are seeing increasing popularity. Besides, China has gradually become a prioritized destination of overseas study for the young generation in Botswana.

Today, Chinese tourists are often greeted by smiley locals in Chinese, no matter in the northern Botswana’s town of Kasane, or on the streets of the country’s capital city Gaborone.

My Botswana friends told me that Chinese people are their good brothers and good partners.

I have every reason to believe that China-Botswana relations will usher in a new era under the joint efforts of both countries, and they are bound to make a new chapter together on their track of common development.

The author, Zhao Yanbo is Chinese Ambassador to Botswana.

Cover photo: A local group showcasing a Taiji performance at the establishment ceremony of the Preparatory Committee of Africa-China Culture and Arts Exchange Society. The objective of the society is to meet the urgent need to understand culture and arts of the Chinese and African peoples in a bid to enrich the lives of the people of Africa as well as promote win-win cooperation and mutual exchanges in the field of culture, arts, education, and media. The event was attended by Chinese and Botswana artists, Botswana government officials, Chinese investors in Botswana as well as guests from Jiangsu Provincial Federation of Overseas Chinese.