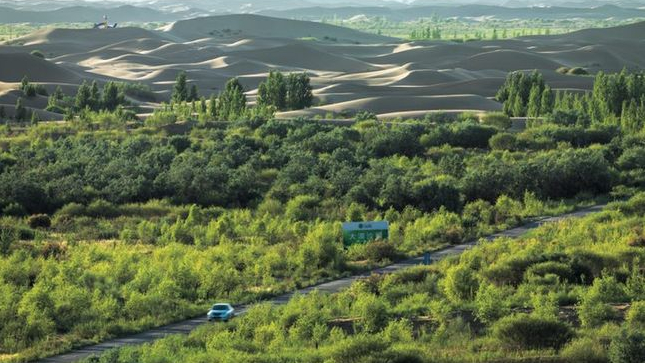 China is one of the largest countries in the world, and contains large area of deserts and degraded land, especially in its northern part. Based on a national survey, the deserts and sandy land will lead to a loss of 172 million square meters by wind erosion.

Since 1978, great efforts have been made by China to combat desertification. The Three-North Protective Forest Shelterbelt Program, or the Green Great Wall, is an attempt to tackle the problem. It covers 13 provinces and autonomous regions in northern China with a total area of 4.1 million square meters, accounting for 42.4 percent of the total land area.

On May 5, 1993, a strong sandstorm swept through northwest China, killing 85 people. Since then, the Chinese government has conducted national surveys in the desert and sandy land in the hope of shifting these vulnerable areas.

National monitoring of desertification has been carried out every five years since the establishment of the United Nations Convention to Combat Desertification (UNCCD) in 1994. China's efforts have paid off, and since early 2000, the situation is looking up.

China's success in combating desertification can be attributed to the following reasons.

First, a series of laws and regulations on combating desertification, protecting farmland and soil have been introduced by China. There are fiscal regulations in China to combat desertification. The large-scale ecological project includes natural forest protection, the reversion of farmland to forests, the Green Great Wall program and a program focused on the Beijing-Tianjin dust sources.

Furthermore, China has realized the importance of technology in addressing desertification. Therefore, the Chinese government has increased financial investment to help enhance scientific and technological support.

In some ecologically vulnerable areas, China has developed special industries such as forestry and made great efforts to minimize the adverse effects of human activity on the land.

China's efforts to combat desertification have eased the problem, while raising public awareness of the issue.

In 2015, the UN adopted 17 Sustainable Development Goals (SDGs), which are broad and interdependent objectives that play crucially important roles in our lives. Environmental protection is definitely included in the list. When it comes to this, China's global contributions are highly regarded by the entire world.

China's model for combating desertification can be effective in other countries, as long as the program is designed to meet the local conditions.