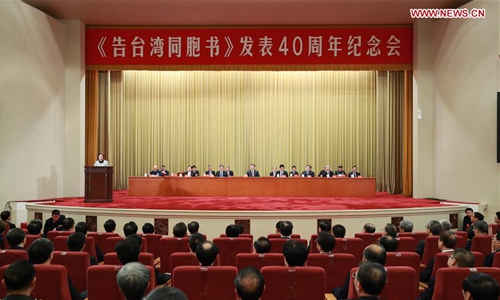 A gathering to commemorate the 40th anniversary of issuing "Message to Compatriots in Taiwan" is held at the Great Hall of the People in Beijing on January 2, 2019. (Photo: Xinhua)

Some senior diplomats of Western countries, including the US and the UK, congratulated Taiwan regional leader Tsai Ing-wen and her Democratic Progressive Party on their victory in the island's regional leadership and legislative elections. US Secretary of State Mike Pompeo's speech of congratulation was more high-profile than that of former secretary of state John Kerry four years ago. They officially sent their congratulations, which is contrary to the one-China principle and sends a wrong signal to Taiwan authorities.

The US, which has been regarding China as a strategic competitor, will get up to more little tricks on the Taiwan question in the coming years. The US will rope in more allies to help, and China must be fully prepared.

China should firmly maintain the one-China principle and avoid being led by the US and Taiwan authorities. We should strive to hold the initiative of the Taiwan Straits in our own hands.

First, we must strengthen the right to define the situation of the Taiwan Straits. The situation should not be decided by the US and Taiwan authorities. Our strategic arrangements should not be restrained by their definition. This means that we can ignore some of the messages that they want to highlight, and we can harshly stop the acts that they want to slip through unpunished.

Second, if the US goes too far, we should resolutely counteract and prevent other Western countries from being coerced by the US. In the future, we must counter those Western countries that follow the US suit on the Taiwan question so as to further convince Western countries of our determination to maintain the one-China principle.

Third, we should encourage Tsai to ease her cross-Straits policies and not to further antagonize the Chinese mainland. Meanwhile, we need to plan to crack down on Tsai's new provocative actions, including imposing military pressure, which is an unbearable option for Taiwan authorities.

Fourth, we should carry out a stronger international promotion of the one-China principle and take the international moral high ground of the Taiwan question. The one-China principle is widely known to the world and has a strong moral foundation. The US and Taiwan authorities use the so-called democracy and Taiwan's public opinion to confront the principle, and the whole world understands their geopolitical malice. China has sufficient conditions to win the battle of public opinion. We need to make the world see who is unilaterally breaking the status quo of the Taiwan Straits and destroying its peace and stability.

The mainland should stay confident and become more united. We must not be led by some malicious public opinion created by some internal and external forces. Taiwan is an island close to the Chinese mainland, not a boat that is drifting away. As the comprehensive strength of the mainland has been increasing, we have enough ability to contain "Taiwan independence." This is a fact that even those "Taiwan independence" forces believe firmly.