China can withstand constant US tricks 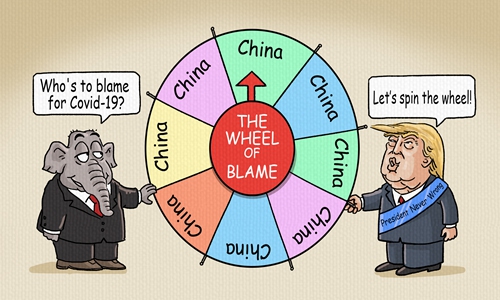 In the past two days, China reported more than 20 local confirmed cases of COVID-19, all of which come respectively from the two infectious chains in Hubei's Wuhan and Jilin's Shulan. Although they are sporadic outbreaks, the Chinese people have paid deserved attention and raised their alert. On Monday, Shulan underwent a quasi "lockdown" state or "war" state.

As long as China can spot new cases quickly, track down close contacts and carry out forceful measures to cut virus transmission, the new infectious chains are not frightful. It can be anticipated that virus prevention and control is a protracted war and we must be able to wipe out any new infectious chains and ensure that the nationwide resumption of work and production are not affected much.

This week, more countries and regions will resume work and production. A race of which country does better in restarting the economy is fermenting. The countries affected the most will be the US and China. The US ranks first in terms of the number of confirmed cases and deaths, and it will also hold presidential elections later this year. China, in addition to managing between virus control and resumption of work, has one more extra task - handling the insane blame game from the US.

Washington's denunciation of China has almost escalated to the level of a war of opinion. It will try every possible means to change new hooks or resort to old charges with new made-up details. China must prepare for these malicious moves.

Perhaps the US will not stick to its accusations against the Wuhan lab, but will continue to attack China for its alleged data concealment at the early stage of the outbreak with new "evidence." The China coverup story best suits the long-term Western narratives about China. No matter how fake it is, people in the West will be fooled for quite some time.

In the past, when the US government blackened China, it cared about whether the Chinese people would believe it. But now, it does not care anymore. On many occasions, Washington knows that the Chinese people will not believe it, and yet it would still blacken China as long as it can deceive some Westerners and win votes.

According to US media, the FBI and the US Department of Homeland Security are getting ready to issue a warning that China is working to steal US research in COVID-19 vaccines. It is foreseeable that Washington will have more publicity stunts to further attack China, such as accusing China of hindering the US' resumption of production, accusing China of using the COVID-19 to intervene in the US presidential election and claiming that China has sabotaged the China-US phase one trade deal.

The US has many tools to spread rumors. The US president, US secretary of state and US senators have become political forces, and media and NGOs social forces. The US also has many allies and supporters in the West. All these forces form a self-motivated group connected by political interests and value system.

It will be China's long-term task to use hard facts, scientific evidence and morality to expose US tricks. We should also reduce the situation where other countries, in addition to the US, also "welcome" the anti-China rumors. This is also important. Sometimes it is easy to see through a rumor, but it can still spread because there is a political and psychological environment that welcomes such a rumor.

It is a long and comprehensive test for China to fight the US smearing. China has done a good job in terms of national development and the COVID-19 fight. The process of fighting back US attacks is the process of China's rise being more widely accepted by the world. China is bound to be the ultimate winner because China's development is unstoppable. We are sincerely committed to a win-win situation with the world, as that is the only choice for China and the world.