OPINIONS China deserves praise, not ill will, for efforts to curtail spread of coronavirus

China deserves praise, not ill will, for efforts to curtail spread of coronavirus 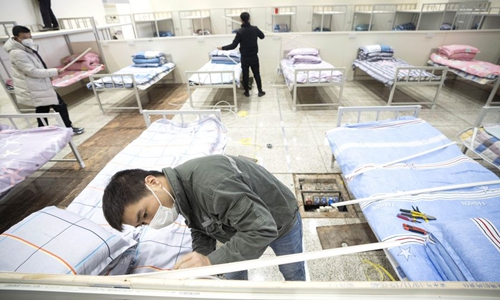 Workers are busy converting Wuhan International Conference and Exhibition Center into a makeshift hospital in Wuhan on Tuesday. (Photo: Xinhua)

The novel coronavirus outbreak in Wuhan, Central China's Hubei Province, has become the focus of international attention. The World Health Organization (WHO) declared on January 30 the epidemic public health emergency of international concern. Over the past few days, leaders of various countries and heads of many international organizations have shown their sympathy and support for China's fight against the epidemic and have generously provided aid such as much-needed medical supplies.

However, senior officials and media outlets of some Western countries have ignored China's enormous efforts to combat the epidemic and launched attacks against the country. Their acts disregard the facts and are extremely immoral, just as a Chinese proverb describes - dropping stones on someone who has fallen into a well.

Major disasters are the severest test of human nature. Human rights violations against Chinese, even Asian-looking people, such as racial discrimination and border entry rejection, deserve the vigilance of the international community.

Infectious diseases, which may break out in any region of any nation, are humanity's formidable enemy. Folke Henschen, the author of The History and Geography of Disease, once said, "human history is also the history of diseases." In human history, smallpox, plague, cholera, leprosy, tuberculosis, measles, rabies, malaria, yellow fever and other infectious diseases have all posed great threats to humans.

The Plague of Athens (430BC-427BC) devastated the ambitious city-state of Athens. The Antonine Plague (165AD-180AD) killed almost one-third of the Roman Empire's population. The Black Death that erupted in 1347 swept across Europe, resulting in the deaths of an estimated 25-30 million people. Before it was eradicated, smallpox plagued humanity for at least 3,000 years. In the 18th century, the number of Europeans who died of smallpox was estimated at over 150 million. And in the 20th century alone, smallpox took the lives of more than 300 million people.

The death toll of the 1918 influenza pandemic is estimated to have reached 50 million, while World War I resulted in the deaths of about 40 million. The outbreak of Influenza A virus subtype H1N1 in Mexico and the US in March 2009 lasted for more than a year, affecting 214 countries and regions and resulting in approximately 284,500 deaths. In 2014, the Ebola virus disease spread to multiple countries in just a few months, killing more than 7,000 people in West Africa. Infectious diseases have killed more people than wars and natural disasters.

To combat infectious diseases, humanity has continued to improve medical technology and public sanitation, which has ensured health security and promoted scientific and technological progress. In this sense, fighting diseases, especially infectious diseases, is one of the driving forces in the development of human civilization. Accounts of inoculation against smallpox in China can be found as early as the late 10th century, and the procedure was widely practiced by the 16th century.

At the end of the 18th century, British doctor Edward Jenner created and promoted the smallpox vaccine, which greatly curbed the possible outbreak of the variola virus and reduced the death rate. In 1928, British bacteriologist Alexander Fleming discovered penicillin, a powerful antibacterial drug, ending the era when infectious diseases were incurable. In 1972, Chinese scientist Tu Youyou successfully extracted artemisinin for the treatment of malaria, which has saved millions of lives worldwide, especially in developing countries. Tu was awarded the Nobel Prize for Physiology or Medicine in 2015.

Since the 18th century, some European countries have taken the lead in the construction of urban sanitation facilities, improving water and sewage systems as well as centralizing waste treatment and disinfection. All these measures have effectively prevented infectious diseases such as the plague. In modern times, the concerted efforts of the international community have eradicated some once rampant infectious diseases. For example, the World Health Organization announced in December 1979 that the world was free of variola virus.

The ongoing epidemic of the novel coronavirus-related peneumonia is another example of infectious diseases that has alarmed humanity. Faced with this major public health emergency, the Communist Party of China (CPC) has been leading the Chinese people in the war to prevent and control the spread of the epidemic. The CPC Central Committee with Comrade Xi Jinping at the core attaches great importance to the prevention and control of the epidemic, and to the interests of the people. It has set up a leading group responding to the pneumonia outbreak, and established an all-around and multi-level epidemic prevention and control system. All relevant measures are being carried out in an orderly and effective manner.

A level I emergency response that includes swift measures has been activated in 31 provinces, municipalities, and autonomous regions in China. Each authority has spared no effort to allocate medical resources in line with the policy of "collecting patients, assembling experts, centralizing resources and focusing on treatment." The country has dispatched working groups to guide local authorities in terms of improving diagnosis, treatment, emergency monitoring, epidemiologic investigation and sampling and testing.

Thousands of medical staff have been storming into Wuhan to help. Factory employees have worked around the clock to produce medical supplies such as masks and protective outfits. The authoritative information on epidemic prevention and control has been released in a timely manner, and the interpretation of relevant policies and measures have been strengthened.

China is also raising the public's awareness of the disease and people's ability to protect themselves from being infected. Huoshenshan Hospital and Leishenshan Hospital were built within days. Green channels have been opened by customs across China to ensure the speedy entry of materials for epidemic prevention and control. Civilian charter flights have brought stranded overseas Chinese citizens home. The Chinese government has promised to cover the medical expenses of patients infected by the virus. Chinese people from all walks of life are donating money and materials to fight the epidemic.

When the outbreak was first discovered, China did its utmost to implement epidemic prevention, control and rescue measures, maximizing the protection of people's lives and health. China also notified the WHO and relevant countries in a timely manner, proactively promoted international cooperation, and adopted measures to reduce the spread of the epidemic beyond its border. The country treated foreigners in China with kindness, demonstrating its responsibility.

China's determination, measures and effectiveness have been a proactive response to the epidemic, and have been universally respected by the international community. WHO Director-General Tedros Adhanom Ghebreyesus on January 30 praised the Chinese government for the extraordinary measures it has taken to curb the spread of the coronavirus, saying that "China deserves our gratitude and respect." He said, "We would have seen many more cases outside China by now - and probably deaths - if it were not for the government's efforts and the progress they have made to protect their own people and the people of the world."

The WHO has confidence in China's ability to control the outbreak, and has not recommended any travel or trade restriction in response to the epidemic. Many countries, such as Germany, France, the UK, Russia, Thailand, Nepal, Tunisia, Cambodia, North Korea, and Cuba, and international organizations, including the European Union, the World Bank, the Shanghai Cooperation Organization, have shown their appreciation and support of China's efforts in preventing and controlling the novel coronavirus.

Russian President Vladimir Putin on Wednesday praised China's moves to fight the virus, saying, "The Chinese authorities are taking decisive and vigorous measures in order to stop the epidemic." Jiji Press, a news agency in Japan, said that combating the virus is not a matter only for China. Silk Road Today, a media outlet in Kazakhstan, said that China's measures implemented to fight the virus are protecting not only China, but also the rest of world.

However, there are still a few countries taking unfriendly measures toward China. A foreign media outlet even insulted the Chinese national flag on the pretext of the pneumonia. Overreaction toward Chinese citizens has also been witnessed abroad. Anyone in any country may be the victim of the epidemic, regardless of race or nationality. Anyone holding a rational, objective and fair stance will fully approve and respect the unremitting efforts made by the Chinese government and people to combat the epidemic, and will be deeply sympathetic to and firmly support the Chinese people.

In the face of the severe situation, the Chinese government has always prioritized its people's safety and health. China understands some countries' concerns about the virus, but the international community should fully trust the Chinese government's ability to deal with emergencies. China's efforts in preventing and controlling the coronavirus have produced effective results. With the continuous enrichment of local healthcare resources and optimization of medical plans, the number of newly cured patients being discharged from hospitals has been rising every day. Chinese people are united in this fight to end the epidemic, and are sparing no effort to save lives. China will eventually win the battle against the disease, just as it defeated SARS 17 years ago.