China and the EU are on track to reach a comprehensive bilateral investment treaty (BIT) by 2020, as the two sides are making "positive" progress and accelerating their negotiations, fueled by rising urgency created by the US' trade protectionism against both Beijing and Brussels. 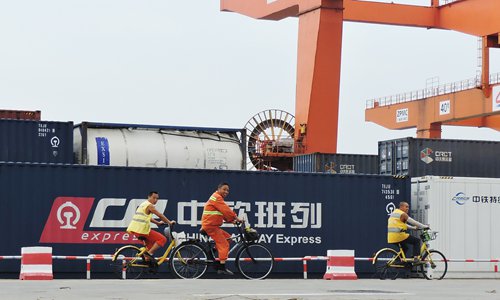 Workers at a train depot for the freight trains between China and the EU in Chongqing Municipality in Southwest China. (Photo: VCG)

Given the ratcheted-up efforts from China and the EU, the two sides are likely to wrap up negotiations on technical issues by the end of this year and sign the BIT by 2020, as previously planned by top officials, analysts said on Thursday.

"Under the efforts of both sides, the negotiations have maintained positive momentum and yielded positive progress," Gao Feng, a spokesperson for the Chinese Ministry of Commerce (MOFCOM), told a press briefing in Beijing.

The two sides concluded a round of negotiations on Tuesday in Beijing, where they focused on the text of the agreement and discussed the exchange and revision of a demand list, according to Gao.

This was the 23rd round of negotiations between China and the EU, since talks were launched in 2013. At a bilateral forum in April, leaders of the two sides determined that they will push to reach "decisive" progress by the year's end and reach a "high-level" treaty by 2020.

Gao said that to reach the goal, the two sides "have invested more in the negotiations and increased the frequency of the negotiations," noting that Chinese and EU officials have conducted four rounds of face-to-face talks and they have also been meeting on other occasions and platforms.

The intensified efforts underscore the urgency to reach a BIT due to rising external pressure from the US, which has launched trade wars on both China and the EU and rising pressure from their slowing economies, analysts noted.

"There is a huge possibility for the two sides to reach a BIT within the stated timetable, because against the backdrop of the trade war, both sides need bilateral cooperation to ease pressure," Ye Bin, a research fellow specializing in EU laws at the Institute of European Studies at the Chinese Academy of Social Sciences in Beijing, told the Global Times on Thursday.

Though China has become the main focus of US trade protectionism, the EU has not been able to avoid aggression from Washington, despite their close diplomatic and security alliance. Often criticizing the EU as "worse than China" in trade, US President Donald Trump has threatened to impose tariffs on as much as $7 billion worth of goods from the EU, which in turn is considering tariffs on $4 billion worth of US goods, according to a Bloomberg report on Wednesday.

China and the US have also been locked in a costly trade war for more than a year with no clear end in sight, though the two sides are planning for more negotiations to address the issues.

Officials are preparing for a round of high-level of talks in Washington in October, but no date has been set.

Given the US aggression, reaching the BIT has become more necessary and urgent for China and the EU, according to Sun Yongfu, former director general of the European Department of the MOFCOM.

"The US has helped China and the EU push forward negotiations of the BIT," Sun told the Global Times, noting the investment treaty will ensure market access and protection for EU investment in China and could spur a new wave of Chinese investments into the EU. "That is in both sides' interest."

The China-EU BIT has also come at a time when China continues to push forward market reform and opening-up and when negotiations between China and the US for a similar BIT have been undercut by the latter's aggressive moves, creating a favorable environment for the China-EU BIT, analysts said.