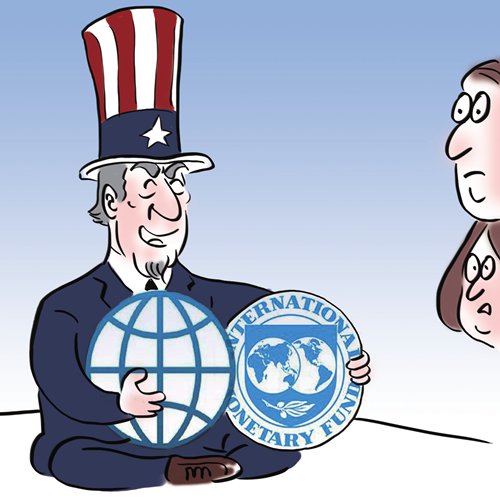 At the just-concluded annual meetings of the World Bank and the International Monetary Fund (IMF), Steven Mnuchin, US Secretary of the Treasury, made a series of requests to the two institutions that aimed to interfere with their operations.

The US government led by President Donald Trump has quit a number of international institutions and multilateral agreements which Washington deems contradictory to its interests. Its attitude toward the World Bank and IMF is comparatively mild.

However, Washington still wants to make the two institutions a tool to serve US interests and its international economic objectives.

For instance, Mnuchin asked the two institutions to reduce global imbalances and curtail their lending to middle-income countries, both of which are to facilitate the Trump administration's domestic economic plan and prioritize US interests.

These two institutions do have deficiencies, such as a lack of capability to deal with crises and shortcomings in governance. But it's improper to put all the blame on them because the US should be primarily responsible for the problems as the founder with the largest voting share in the two institutions. In fact, the US tendency to pursue national interests, advocate its political goals and expand its own models causes many problems to the institutions.

The US ability to monopolize the agendas of international organizations has decreased since the 2008 global financial crisis, while the other countries have had more say. The independence and specialization of the institutions have improved after the IMF's quota and governance reforms. It is expected that they will not simply follow US demands but carry out work based on market rules and the real situation.

China and its initiated multilateral financial institutions are embarking on a new mode of cooperation which is completely different to how the self interests-driven US operates. China set up the Asian Infrastructure Investment Bank (AIIB) and is the largest shareholder. The relationship between the two is an equal partnership. China never asks the AIIB wantonly to work for its own interests. The AIIB board is responsible for its own decisions, and the bank invests in regional infrastructure projects rather than serving China's goals.

The 21 projects approved by the AIIB are all around Asia but none will be in China. The ethos of the relationships between China and its newly established multilateral financial institutions is to help instead of control, and to be public and not private.

In terms of regional economic development, Asia and the world need more multilateral financial institutions like the AIIB, and China is capable of investing the most resources. China will limit its own power in the institutions by regulations to avoid unilateral control, just as it has done in the AIIB. With this type of governance style, the newly established institutions will develop steadily and rapidly, avoiding the mistakes the World Bank and IMF have made.

China still needs to learn a lot from the US about regional and international financial governance. But in terms of the concepts and practice, China could also teach the US. The US could adopt China's thoughts and experience, and adjust its relations with the World Bank and IMF to make contributions to global economic development.