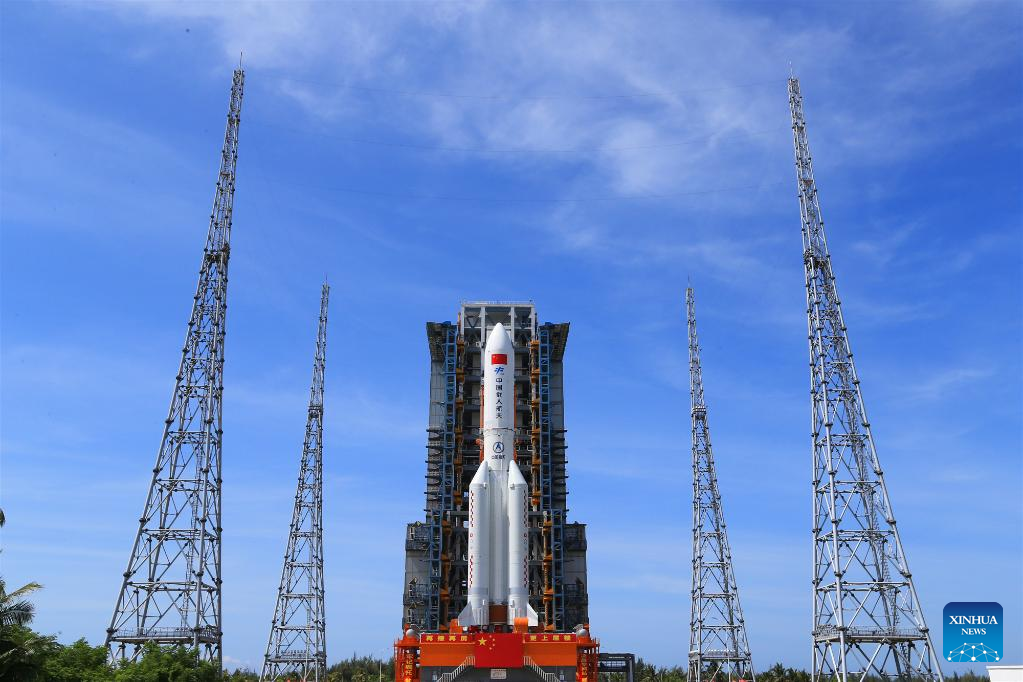 The launch of China's space station lab module Wentian has attracted worldwide attention, which is a latest step of China's great space exploration.

Wentian, or "Quest for the Heavens", will be the Tiangong space station's first lab component. The craft weighs more than 20 metric tons and is about six stories tall, and consists of three major parts — a crew work compartment, an unpressurized cargo module, and a control module.

Scientific cabinets inside Wentian will mainly be used to perform biological and life science tasks and will support research on the growth, aging and genetic traits of plants, animals and microbes in space.

Such news will obviously rattle the US, because it cannot accept the progress other countries have made in space research owing to its hegemonic mindset and skewed sense of superiority.

NASA Administrator Bill Nelson told the German newspaper Bild on July 2 that, "We must be very concerned that China is landing on the moon." Claiming that China could take over the moon, asserting, he asserted that, "It's ours now and you stay out."

Earlier, on May 17, Nelson had warned about the space race with China at a US Congress hearing. He also warned about China's aggression in outer space and the cybersecurity risks posed by technology theft, alleging that, "They are pretty good at stealing."

These are baseless claims.

The Outer Space Treaty, which entered into force in October 1967, says space is not subject to national appropriation by claim of sovereignty, by means of use or occupation, or by any other means, and that outer space shall be free for exploration and use by all states. Hence, it's ridiculous that a high-ranking US official is trying to smear China, especially because China has always conformed to all United Nations tenets and abided by its conventions.

China has never thought about taking over the moon or monopolizing outer space. On the other hand, US leaders and scientists have made such a claim. For instance, as early as in 1950s, US scientists urged Washington to intensify its scientific endeavor to take over the moon before the Soviet Union did, and plant the stars and stripes on the moon’s surface to claim sovereignty over it.

Although this US ambition was dashed due to the Outer Space Treaty, the colonial mindset of "possession upon discovery or arrival" is unfortunately deep-rooted in some people's minds, Nelson included.

Indeed, China has made remarkable strides in the aerospace industry in the past decades, from the launch of its first artificial satellite in 1970 to the launch of the Shenzhou-14 in 2022. Now, it is building the Tiangong space station, and has promised, most remarkably, to provide all countries with space research and exploration opportunities under the UN cooperation framework. In fact, nine science projects designed by 17 countries will be among the first scientific experiments in the Chinese space station.

Having suffered invasions and occupations by colonial powers in the past, China understands the predicament of many developing countries that have been victims of Western colonialism. Space research and exploration, especially the technologies and applied sciences which it may result in, may present greater development opportunities for developing countries.

That is exactly why biomedicine, material research, and animal and plant research are given priority in China's outer space project. The exploration of the moon is also part of China's outer space project. In 2019, China became the first country to successfully land a probe on the far side of the moon. The same year, China and Russia announced a joint lunar expedition, including the establishment of an international permanent manned lunar scientific research station.

Even though the exploration of the moon, including manned landing and construction of research stations, is technically complex, investment intensive, and time consuming, it could help human beings better understand the moon and investigate the potential value of the moon to meet humankind’s resource demand.

Yet China has never intended to explore the moon alone. On the contrary, it hopes to help more countries access outer space and conduct space research through its own programs, so as to benefit humankind.

In contrast, still obsessed with the zero-sum game, some Western countries have set up one obstacle after another to the exploration of outer space for the common good. Companies such as SpaceX are building a "star chain" with tens of thousands of satellites for corporate gains while taking up huge orbit resources. These seriously challenge the basic principle of space resource sharing and exploration for the interest of humankind. The US government, too, is promoting the commercialization of space operations for economic gains, with US officials even considering formulating a tax system for commercial space companies.

But China believes in the concept of a community with a shared future for mankind and adheres to the principle of win-win cooperation, which are being welcomed by more and more people across the world. And in space, China will always steadfastly uphold peace, and promote cooperation and mutual benefit.

The author is the editor-in-chief of Aerospace Knowledge.

The views don’t necessarily represent those of China Daily.