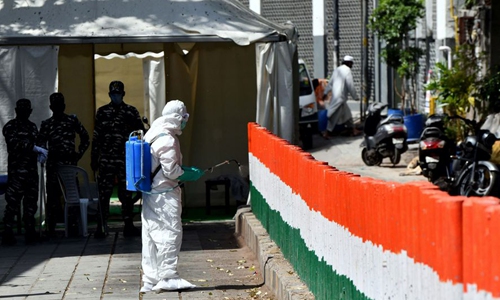 A health worker sanitizes an area near the Nizamuddin mosque in New Delhi, India, on April 10, 2020. (Photo: Xinhua)

As of Saturday morning, India has reported 14,425 confirmed cases of COVID-19 and 488 deaths. As the world's second-largest populous country, India's mortality rate is lower than in many other countries, which indicates the government's decision to impose a nationwide lockdown led by prime minister Narendra Modi has achieved remarkable results.

However, some international infectious disease experts are apprehensive of the figures. They are concerned the actual infections in India may be much higher than what has been reported. The key reason is India's limited testing capabilities.

India's nationwide blockade has also resulted in several domestic problems, for instance, its medical institutions still lack medical hardware and resources. The Modi administration has recently announced an extension of the lockdown till May 3, which may help ease the huge pressure on medical institutions and win more time to procure medical resources.

However, the enforcement of the lockdown policy continues to cause several social and livelihood problems. For example, about 80 percent of the employed people in India make their living by working without legal protection, and assisting these people without social security is a challenge. Furthermore, since rural migrant workers in India are already unemployed, at the beginning of the blockade, we have witnessed a large number of returnees were stranded because of the country 's insufficient transport capacity, which increased the risk of epidemic transmission.

Experts believe the number of confirmed cases in India will continue to rise in the coming days, and may even increase rapidly at some stage. According to relevant data simulation, if no control measures are adopted, 30 million to 50 million Indians could be infected by the end of July, and about a tenth would likely be in critical condition. Therefore, the epidemic situation in India continues to be grim, and the government is facing enormous pressure to deal with this epidemic.

Besides, India's public health infrastructure is weak. Although the facilities in India's private hospitals are considerably better, they are private properties and their medical resources are not commanded by the government. India also has a large poor population who live in crowded and unhygienic environments, and the country's population density is high. For example, in Mumbai, India's financial center and economic powerhouse, Dharavi locality is one of Asia's largest slums. The population density of Dharavi is estimated to be 270,000 per square kilometer. Recently, there have been confirmed cases of the COVID-19 in the area, and people are concerned this may be a significant sign of the spread of the epidemic in India.

Mike Ryan, WHO Emergencies Program Director, said on March 23, "India is a hugely populous country. The future of this pandemic will be determined by what happens to densely-populated countries." Some measures of the Modi administration have proved to be effective, including the nationwide lockdown, further strengthening of large-scale testing, and expansion of medical resource production. Indian people are also relatively cooperative. These measures are in line with India's national conditions. Besides, India has certain natural advantages in combating the epidemic. In particular, India is one of the youngest countries in the world. Of the 1.3 billion people, 800 million are young and middle-aged. The average age of the workforce is only 27 years old.

The pandemic knows no borders or races. It is the common enemy of mankind. China and India account for two-fifths of the world's population, which is of great significance to humans to overcome this pandemic. This year marks the 70th anniversary of the establishment of China-India diplomatic relations. The two countries have a lot of room for cooperation in overcoming COVID-19, including the production of medical supplies, sharing experience in combating epidemics, and developing vaccines. Let's anticipate to foresee a further strengthened cooperation in these fields.