China, India must strive for harmony 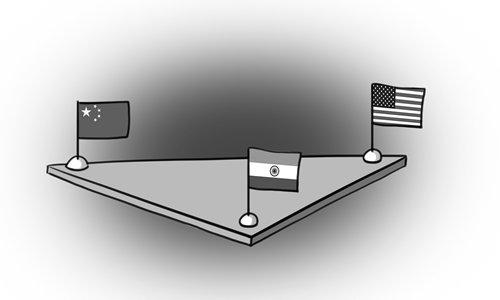 Chinese President Xi Jinping held an informal meeting with Indian Prime Minister Narendra Modi on Friday and Saturday in Wuhan, capital of Central China's Hubei Province. This is the most inspiring diplomatic endeavor made by the two countries to mend ties since last year's Doklam standoff. The meeting will exert enormous influence on Asia and the world.
As Chinese Foreign Ministry spokesperson Lu Kang put it, in the face of unprecedented changes in the world today as well as uncertainty and instability in the current international situation, Xi and Modi, as the leaders of the two largest developing countries, also feel that the two countries need to communicate in great depth on some long-term, comprehensive and strategic issues embedded in bilateral relations and international affairs.
Through this visit, Modi strives to improve India-China relations, adjust neighborhood diplomacy and New Delhi's ties with other major powers, pave the way for his election politically and attract China's investment. It is necessary for the two countries to enhance cooperation against the backdrop of rising protectionism in the West, especially the America First doctrine championed by the Donald Trump administration and a pending China-US trade war.
Modi's meeting with Xi weeks before the Shanghai Cooperation Organization summit in June reflects his urgent need to boost relations with Beijing. The informal meeting also shows that China is willing to receive Modi in an extraordinary manner and respects India as a major power.
Wuhan is an ideal place to hold an informal meeting for three reasons. It is the epitome of the profound Jing-Chu local culture. Buddhism, which originated in India, substantially affected the development of ancient Chinese culture, but Chinese and Indian civilizations have their own merits. The two civilizations featured harmonious coexistence and mutual learning in ancient times and should continue setting an example to all civilizations worldwide.
China hopes its relationship with India, which plumbed new depths and reached a nadir because of a 72-day military standoff last year, can evolve into a new type of major-country relations. The two nations, which jointly advocated the Five Principles of Peaceful Coexistence in the 1950s, should explore ways to live in harmony through the wisdom of Eastern civilizations, instead of dragging themselves into geopolitical competition and confrontation.
Wuhan is also home to historical events during the Three Kingdoms Period (220-280). Because of his shortsightedness, the Wu emperor Sun Quan (182-252) broke his alliance with the emperor of the Shu Kingdom Liu Bei (161-223) and attempted to capture the latter's land, triggering military conflicts between the two states. The Wei Kingdom benefited from the war that weakened Wu and Shu, and toppled the two states to end the period of the Three Kingdoms. This is worth thinking deeply about for Chinese and Indian politicians and strategists as China, India and the US are a little like the three kingdoms of that period.
China and India led the development of human civilizations before modern times but were bullied by the West in modern history. If the two emerging economies can develop their relations into an intimate partnership and a new type of major-country relations, there is great hope for the rapid rise of China and India and the revival of Asia. However, Western countries may not be resigned to losing leadership and dominance over the world that have lasted hundreds of years.
As the world is undergoing profound changes, Beijing and New Delhi should ponder whether to promote the rejuvenation of Asian civilizations or to fall into conflict and confrontation because of the West's conspiracy to drive a wedge between them. Leaders of China and India should reach a strategic consensus.
Xi and Modi have reached many consensuses during their informal meeting, but putting those consensuses into practice remains a big challenge for Modi. Diplomatic and strategic elites in India should ramp up efforts in this regard, but a great number of them have been beset by stereotypical mind-sets including sphere of influence, regional hegemony and a Cold War mentality. They are also calculating and unwilling to make the smallest sacrifice, and are adept at linking their trivial loss to bilateral ties with China. Therefore, the barrier to implementing those consensuses remains huge.
Many strategic elites in India are financially backed by the West and hence speak for Western countries. In their view, a prime strategic option for India is to strike a balance between China, Russia, the US and Japan.
China sees the informal meeting as a way to advance the common growth of developing countries, for Asia's rapid rise and the revival of Eastern civilizations. But for India, this meeting will likely end up achieving their tactical goals under the guise of attractive strategic slogans.