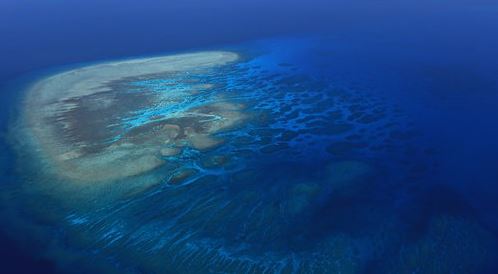 A bird's eye view of an island is captured by a patrolling soldier at the Nansha islands. (Photo: Global Times)

It has been reported recently that Indonesia protested over Chinese fishing vessels and coastguard presence in the waters near the Natuna Islands, claiming that "China's claims to the exclusive economic zone on the grounds that its fishermen have long been active there... have no legal basis and have never been recognized by the 1982 UNCLOS." Chinese Foreign Ministry spokesman Geng Shuang replied on Dec 31, stating that China has sovereignty over the Nansha Islands and has sovereign rights and jurisdiction over relevant waters near the Nansha Islands. In the meantime, China has historical rights in the South China Sea. Therefore Chinese fishing activity and coastguard vessels' presence is legal and legitimate.

The Natuna Islands are located on the southern tip of the South China Sea with abundant natural resources such as fisheries, oil and gas. China has recognized Indonesia's sovereignty over the Natuna Islands for many years. In 2015, Chinese Foreign Ministry spokesman Hong Lei clearly stated that China has no objection to Indonesia's sovereignty over the Natuna Islands. However, Indonesian claims of an EEZ in the Natunas overlap with the maritime territorial waters of the Nansha Islands. To Chinese fishermen, this part of the South China Sea has been known for decades as the southwest fishing grounds. Thus the two states have had a dispute over maritime jurisdiction in the waters.

Since the 1990s, Indonesia has sought through diplomacy to manage this issue with China over sovereign rights and jurisdiction in the waters of the southern part of the South China Sea while not disturbing its overall relationship with China.

Indonesia continues to insist that it has no territorial claims over areas in the South China Sea. While being a non-claimant, it has expressed many times that it would be happy to be "an honest broker" in the dispute by not siding with any party.

Nevertheless, it is sometimes trapped in the dilemma of neutrality and self-interest. On one hand, the Indonesia-led Workshop on Managing Potential Conflicts initiated in the 1990s aims at managing conflicts by exploring areas of cooperation among coastal states that used to be an essential mechanism of conflict management. Indonesia is also one of the main promoters of the ASEAN Outlook on the Indo-Pacific, which was passed on Jun 23rd, 2019, in the ASEAN Regional Forum, strengthening inclusiveness and consensus-building.

On the other hand, Indonesia attempts to reframe the issue with China by insisting there are no overlapping claims. In July 2017, Indonesia showed a stronger posture by renaming the southern tip of the South China Sea, the "North Natuna Sea," to enhance its maritime claims.

Since Jakarta has decided to fortify its claimed maritime borders north of the Natunas, there have been quite a number of clashes between Indonesia and other countries bordering the South China Sea such as Vietnam and China. In March 2016, an Indonesian Maritime Affairs and Fisheries patrol ship intercepted a Chinese trawler in this section of the waters. In April 2019, the Indonesian navy arrested a dozen Vietnamese fishermen and came into conflict with Vietnamese coastguard vessels. Indonesian President Joko Widodo launched an aggressive campaign against so-called illegal fishing shortly after he took office.

In all, the dispute between China-Indonesia is mainly about fishing rights, and it should not be escalated to a political and territorial one. With the Code of Conduct negotiations progressing on a fast track, it is time for the two nations to sit down and find an amicable solution to this decade-long issue. China and the Philippines inaugurated the Bilateral Consultation Mechanism on the South China Sea since 2016 and so far conducted five meetings. China and Malaysia also set up a bilateral dialogue mechanism to deal with maritime issues in September 2019. Both of these mechanisms established technical working groups to work on maritime issues of mutual concern and possible cooperation initiatives. It is time for China and Indonesia to consider a similar agreement to guarantee that maritime issues will not disturb the overall cooperation and relationship between the two countries.

The year 2020 marks the 70th anniversary of the diplomatic relationship between China and Indonesia. Widodo is also planning to pay a state visit to China this year. It is time for the two to make joint efforts to find a way out of this conundrum to ensure peace and stability in the South China Sea.