The city of Rome has been surrounded by a friendly atmosphere these days. Before Chinese President Xi Jinping’s state visit to the European country, Italian President Sergio Mattarella, Prime Minister Giuseppe Conte, and other politicians and famous people of various circles received interviews with People’s Daily. 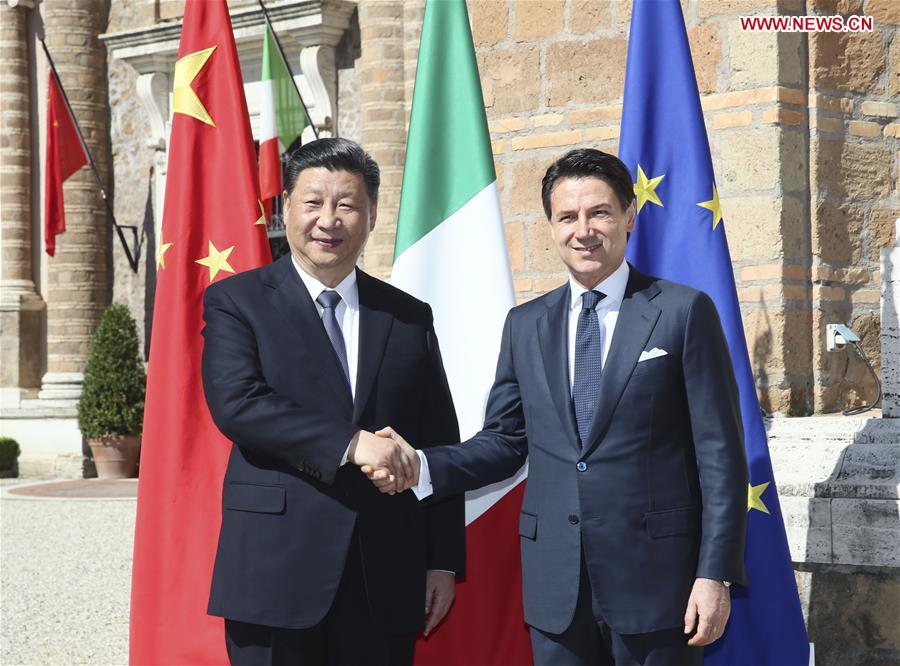 The most special interview was the one we had with former Italian President Giorgio Napolitano. Though the 94-year-old respectable could not talk to us face-to-face due to his health conditions, he published a signed article on People’s Daily to send his best regards to President Xi.

These interviewees expressed a common view that China is open and confident under Xi’s leadership, and has made impressive progress. They agree that China has created important opportunities for Italy and the world as a whole through its own development.

As two ancient civilizations in Asia and Europe, China and Italy started to share a special connection since more than 2,000 years ago.

During the Eastern Han Dynasty (25-220 AD), Chinese emissary Gan Ying was sent to search for "Da Qin", the Chinese name of the Roman Empire at the time. When Julius Caesar (100-44 B.C.), the legendary Roman general， turned up at a theater draped in splendid Chinese silk, he caused a big stir. The famous explorer Marco Polo's Travels roused the first wave of "China fever" among European countries.

In addition, from Martino Martini, author of the first Chinese grammar book in Europe, to the Peking opera version of Turandot jointly launched by artists of the two countries, numerous vivid pictures have depicted the frequent exchanges and friendly dialogues between the two ancient civilizations.

President Xi’s visit is a significant event for not only both countries concerned, but also the whole world, said Italy’s Finance Minister Giovanni Tria, adding that the trip will exert important influence over Europe-China relations and the world as a whole.

China and Italy are both supporters of multilateralism and free trade. The two countries could enhance communication and cooperation on global governance, climate change, reform of the World Trade Organization (WTO), so as to jointly safeguard global peace and stability, as well as development and prosperity.

The Italian side expects and believes that President Xi’s visit will surely provide strong impetus and open a brighter prospect for the two countries to elevate their comprehensive strategic partnership.

Martine, a clerk of a jewelry store at Spanish Square in Rome, speaks fluent Chinese. The young lady graduating from the Italian Institute of Oriental Studies at Sapienza University of Rome told People’s Daily that she has studied at Beijing Foreign Studies University and has a Chinese name Ma Lin.

Excited about President Xi’s visit, Martine said China’s openness, development and prosperity is beyond her imagination, adding that Italy needs China to develop. “I look forward to revisiting China as soon as possible,” she told People’s Daily.

“In the course of over two millennia, our two countries have embraced the principles of mutual respect, mutual learning, mutual trust and mutual understanding in our interactions, principles that underpin our long-lasting, ever-strong friendship,” President Xi said in the signed article published on an Italian newspaper before his visit.

The principle is in line with the traditional Chinese culture of inclusiveness and harmony, which is to seek harmony within diversity and pursue common prosperity. The world is a community of shared future for mankind, though countries have different social systems, culture backgrounds, and development stages.

Only by having the mind and perspective that seeks inclusiveness, as well as the trait and spirit that pursues harmony can we eliminate conflicts between different civilizations and realize common development.

Forging a new form of international relations featuring mutual respect, fairness, justice, and win-win cooperation conforms to the trend of the times and is a natural choice of history, at a time when the world is undergoing profound changes unseen in a century.

The ancient Silk Road has composed an ever-lasting epic between China and Italy. In the new era, the two countries have the confidence and wisdom to upgrade the traditional friendship which is deeply rooted in history into concrete actions to enhance strategic mutual trust, consolidate pragmatic cooperation, promote cultural exchanges and strengthen communication and coordination, so as to better benefit the two peoples and the world.