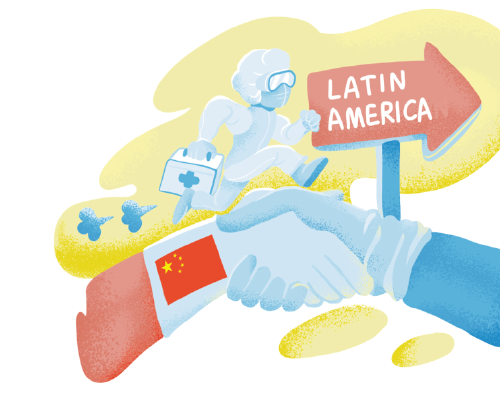 For Latin America, China is an important friend and economic development partner. Over the past 40 years, China has lifted more than 800 million people out of poverty. In contrast, Latin America remains a region characterized by inequality and low productivity where one out of every 10 people lacks access to basic human necessities.

Latin America is a region rich in mining products and derivatives of agricultural industries, and a market of more than 600 million people. And by deepening exchanges between Latin America and China, the China-proposed Belt and Road Initiative has expanded the market for those Latin American products.

Latin America has become one of the main destinations for China's foreign investment, and China is Latin America's second-biggest trading partner with a trade volume of $307.4 billion in 2018, up 18.9 percent year-on-year. Also, some Chinese companies are helping build some mega-infrastructure projects including roads, railways and power plants in Latin America. And the region is seeing a growing demand for high-tech Chinese products, and electrical and mechanical equipment.

Apart from sound economic relations, Latin America and China have also been conducting fruitful cultural interactions thanks to initiatives such as China-Latin America and Caribbean Cultural Exchange Year in 2016－about 4,000 professionals from Latin America visited China to receive further training in 2018 alone.

By the end of 2018, 16 of the 20 Latin American countries had signed bilateral agreements with China, with some of them, such as Brazil, Peru and Chile, having longstanding trade ties with the Asian giant. And although countries such as Panama resisted establishing diplomatic ties with China in the past, they have changed their policies now. The access to economic credits facilitated by China could be one of prime reasons for that.

Besides, people in Latin America, in general, believe many Western institutions have played a controversial role, especially by recommending that governments implement austerity measures to boost the economy, because austerity, in many cases, is associated more with paying bank interests than improving people's lives and livelihoods. The Western institutions have also prompted many Latin American governments to impose measures without even considering the social effects they would cause.

In Ecuador, for example, the government of Lenin Moreno had to withdraw fuel subsidies in 2019 to get a loan from the International Monetary Fund, although the overwhelming opposition to the move ultimately forced the government to scrap the decision. And former Argentine president Mauricio Macri, according to government information, had to use most of an IMF loan to repay the debt of the global monetary fund.

By contrast, Chinese investors and lenders don't interfere in Latin American countries' internal, including political, affairs. As a result, Chinese funding can be used to improve the livelihoods of people in Latin America. Plus, the improvements in infrastructure in the region, thanks to China's efforts, will make life easier for the more than 600 million people, a substantial percentage of whom are young.

The Belt and Road Initiative has intensified exchanges between China and Latin America and reduced the distribution costs of goods and services. And with several reports saying that, in a few decades, some emerging countries such as Brazil, Mexico and Colombia could outperform several European countries in terms of economic development, China-Latin America ties are likely to move toward a more mutually beneficial future.

China has largely contained the novel coronavirus outbreak at home, and Chinese companies have ramped up production of medical products, which can be sent to other countries so as to help them fight the outbreak. Actually, China has sent medical supplies to more than 150 countries, with Latin American countries such as Argentina, Brazil, Peru and Ecuador welcoming China's generous contribution, which includes ventilators, test kits, face masks and gloves, to contain the coronavirus pandemic.

The pandemic, it appears, will usher in a new world order, in which China will play an even bigger role and China and Latin America will be natural partners－China because of its innovation capability and technological and industrial developments, and Latin America because of its natural resources－along with the existence of emerging societies that will continue to grow in the coming decades.

Therefore, despite, or due to, the pandemic, the two sides should deepen cooperation, among other things, to boost two-way ties and promote inclusive globalization.

The author is a senior lecturer at the Universidad del Rosario (Colombia), and an invited researcher at Fudan Development Institute, Fudan University. The views don't necessarily represent those of China Daily.