China-Malaysia ties to remain on course amid surprise PM resignation 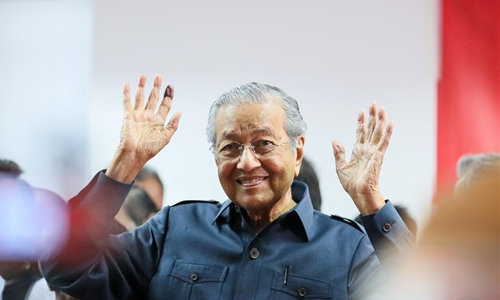 Malaysian Prime Minister Mahathir Mohamad formally submitted his resignation to the king and announced he would be stepping down on Monday. Later that same day, Mahathir's resignation was accepted but he will stay on as interim prime minister until a new one is appointed. Media outlets speculated that Mahathir's surprise resignation was a result of his failure to keep an earlier promise to step aside for his supposed successor Anwar Ibrahim.

Alliance of Hope (PH), the ruling political coalition of Malaysia, was composed of four parties, the People's Justice Party (PKR), Democratic Action Party (DAP), Malaysian United Indigenous Party (Bersatu), and National Trust Party (PAN). Among them, Mahathir's Bersatu holds a small number of seats. In the 2018 elections, Mahathir promised to hand over power to Anwar within two years. With the exit deadline looming, many were waiting to see if Mahathir would follow through on his promise. Speculation has also emerged that his move could be a retreat that will lead to an advance.

Mahathir has wanted to form a new political coalition. Mahathir's Bersatu quit the PH coalition to support his exit, and members of Anwar's PKR, including the country's deputy president Azmin Ali, also announced they would be leaving from their party as well as the coalition, which would be a blow for the PH.

Malaysia's The Star recently reported that Mahathir had won the support of 138 out of 222 MPs to remain in power for the full term.

While Mahathir remains as interim prime minister, it is unclear if Anwar will assume the office, or if Mahathir will continue to rule the country. The result will depend on how the various parties play the political game.

Regardless of who the prime minister is, relations between China and Malaysia will stay on course, as bilateral exchanges between the two have been frequent. Ethnic Chinese account for more than 22 percent of the country's population and have an influence on the country.

Additionally, as China's strategic partner, Malaysia was among the first countries to support and participate in the China-proposed Belt and Road Initiative (BRI), where many BRI projects have since landed.

Political changes among China's partner countries, such as Mahathir's sudden resignation, will have some impacts on BRI projects. Both governments might have already reached a consensus on certain deals, but amid political change, some deals may need to be renegotiated with Malaysia's new authority.

When Mahathir took office in 2018, several China projects in Malaysia faced difficulties. After more than a year, however, these projects, including the East Coast Rail Link, a standard gauge double-track railway link infrastructure project, have resumed.

Regardless of who the Malaysian prime minister will be, he will have vision and goals for economic development, which China, especially through its BRI, can offer. It is expected that Malaysia's next state leader will cooperate with China. And the same can be said of other Southeast Asian nations.

For the Chinese government and businesses, in the face of such political changes in BRI countries, it is necessary to pay attention to their situations, strengthen communication with embassies, learn relevant information and news, and make timely judgments.