OPINIONS China must create the miracle of curbing imported cases

China must create the miracle of curbing imported cases 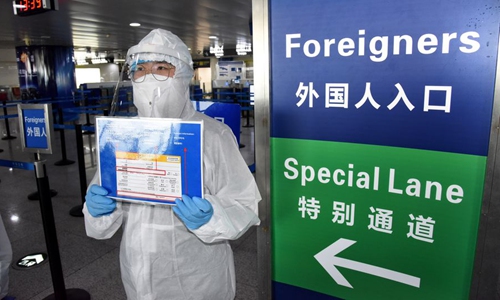 The Chinese mainland has reported zero confirmed local infections of the COVID-19 for two consecutive days. US President Donald Trump, who is struggling with the epidemic outbreak in the US, responded jealously: "Who knows? But I hope it's true, I really do."

The New York Times more explicitly expressed its doubts about China's improving situation and summarized the "damage" caused by China's measures against the epidemic. It interviewed an expert who emphasized that China's measures "are not necessarily sustainable" and there may be "a second wave." Those who read the article may feel that China's fight against the COVID-19 is much worse than that of Europe and the US.

It seems some US elite really hope that China will suffer from a second wave of infections. They may feel that China's effective measures, especially those launched immediately and enforced strictly, reflect the US administration's incompetence and the US system's weak points. Their embarrassment has turned to anger.

Each country has their own national conditions and it is difficult to compare their response to the COVID-19. But the US' response is definitely one of the worst. Wuhan's lockdown was a warning to the world. After that, Japan, South Korea, Iran, Italy and some other European countries all reported confirmed cases. But all these alarms still did not wake the US government up. Two weeks ago, Trump was still reiterating the risks were low in the US. This is shameful.

China has learned lessons while fighting the epidemic, and some senior officials have been held accountable. The US government has deliberately downplayed the severity of the epidemic. Its inaction has been shocking, but there is nothing the US system can do. On Monday, Trump said he would give himself a perfect 10 out of 10 for his coronavirus response. This is hilarious.

It is impossible for an administration, which cares only about re-election, to make the fight against the COVID-19 a top priority. All they think about is to pass the buck and try not to make people angry at the government. Minimizing infections and the mortality rate has been ignored because of their personal interests.

Just let them believe that China's achievements are "fake." But China will definitely prevent another large-scale outbreak from happening. The Chinese people will successfully stop what Americans have failed to stop.

China should not take US badmouthing too seriously. The most important thing for us now is to detect all imported cases. We can achieve this if we resolutely promote the collective quarantine of people entering the country. No country has successfully done this, and the Chinese people should create the miracle.

To prevent imported cases, we must ensure that all people entering China are quarantined and trace back all people who entered China within 14 days and implement self-quarantine. These must be done perfectly. For example, Global Times reporters have found that some people entering China shared the same flight with domestic passengers during their domestic transfer. This is an important loophole and must be closed.

As long as we close all loopholes, we should promote the resumption of production and consumption. There must be no shortage of personnel and material resources to block imported cases. Neither should we waste resources on locking down the communities where no new cases have been reported for a long time, or on quarantining people who travelled within the country. We must quickly adjust our focus.

This is a war, and a new battle line has been drawn. Prevention of imported cases and resumption of production are two new fronts we must not lose. The future is still complicated and we will continue to face severe tests.